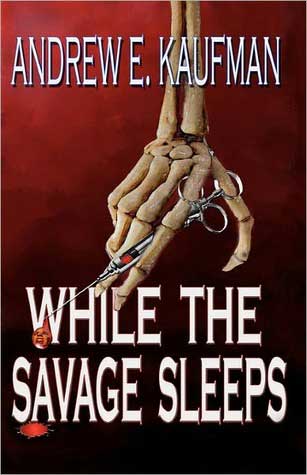 WHILE THE SAVAGE SLEEPS

Andrew E. Kaufman’s debut novel takes us to the town of Faith, New Mexico, where something is amiss. A few hours away from New Mexico’s big city of Albuquerque, Faith is a quiet town with very little crime. It’s a nice little place where everyone seems to know each other at least well enough to say a polite hello. It’s also a place where any violence, let alone murder, is rare. That’s probably part of the reason that Cameron Dawson moved back home to Faith to be the assistant sheriff. Unfortunately for assistant sheriff Dawson, violent murders have come to Faith, and the body count is accumulating very, very quickly.

With each new murder, the following investigation creates more questions than answers about who is doing the killing and what is motivating him/her/them. Inconsistencies among the various deaths hamper the pursuit of the potential killer(s), and the reader is as puzzled as Mr. Dawson (and his law enforcement department) as the clues accumulate and point to seemingly everywhere. To make matters worse, Dawson is constantly reminded of tragic events of his past as he furiously tries to make sense of the wave of madness sweeping through his town, bringing with it the attention and presence of many Faith outsiders.

However, this is not just a novel about a police investigation of a slew of brutal murders (which may or may not be related to one another), where we simply follow them around while they are tracking down those responsible. While The Savage Sleeps is what has been described as a “forensic paranormal thriller.” The “paranormal” part of this characterization of the novel is what brings Kyle Bancroft into the mix. Kyle is a physician in Albuquerque, who is, initially unbeknownst to her, being drawn to the distant town of Faith and the events that are occurring there. Kyle has had paranormal visions and abilities since childhood, and her most recent visions (and the creepy little girl starring in them) seem to be guiding her to intervene in the bloody mess that Faith has become. It appears fairly clear early on that Cameron and Kyle and their independent lives are going to intersect at some point, but we are left to wonder when, how, and why. We are also left with the lingering stress of also wondering whether or not there will be enough time for them to help each other help the people of Faith to avoid the impending epidemic of bloodshed on the horizon.

The novel is well crafted, with things happening fast from the outset, and not slowing until the secret of what is going on in Faith, NM is finally uncovered. The story reminded me of an X-Files episode with a heavy dose of your pick of the ubiquitous CSI shows on television these days. There is a lot of dialog, and as a result, I many times felt as though I was watching a movie or a television show rather than reading a book. The author obviously spent some time doing his homework regarding forensic criminal investigations and all that other CSI stuff, and it definitely adds to the overall experience.

My complaints are minor. One is regarding the cover. The cover of any mystery should be minimally revealing so as to not ruin any potential surprise. I worry that the cover on this one may help the reader along in figuring things out a bit earlier than should be the case. I hope not, but I do think the cover may have brought me out of the dark earlier than the author wanted me to remain there. I also unfortunately felt as though things ended too quickly. There was a lot of build up, with two stories picking up speed and then colliding and heading together into the final reveal. I wanted more once it got to that point, and I was saddened that there was not more to be had. Regardless, it is a credit to the author that he got me to the point where I wanted more. I was satisfied, but still hungry. Not necessarily a bad thing the more I think about it.

I recommend that readers pick up a copy of While The Savage Sleeps and let it take them on a ride to and through the little town of Faith, New Mexico. It’s a fast ride that is well worth it, and readers will more than likely be wanting more of Andrew E. Kaufman’s work thereafter. Hopefully there is more to come from him sooner rather than later.