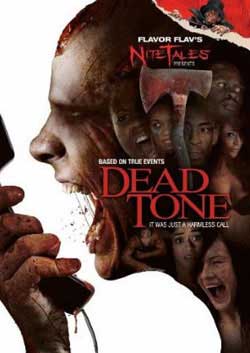 A seemingly innocuous pastime involving fun-loving collegians and prank phone calls turns into a lethal cat-and-mouse game in this blood-drenched fright feast starring Rutger Hauer and Brian Hooks. While vacationing at a secluded mansion after finals, a group of university students dials random telephone numbers and tries to unnerve the person on the other end. But their fun is short-circuited when one of them unwittingly connects with a slasher.

A bunch of kids at a sleep over take a page from Bart Simpson’s prank phone call book:

Bart: Is Al there?
Moe: Al?
Bart: Yeah, Al. Last name Caholic?
Moe: Hold on, I’ll check. Phone call for Al… Al Caholic. Is there an Al Caholic here?
(The guys in the pub cheer.)
Moe: Wait a minute… Listen, you little yellow-bellied rat jackass, if I ever find out who you are, I’m gonna kill you!

But unfortunately for the kids in DEAD TONE, the dude on the other end of the phone isn’t Moe spouting harmless threats, it’s an axe-wielding psycho who shows up at their house and butchers all the parents who are in the other room having their own party. Fast-forward to years later, and the surviving kids have grown up to not be totally mentally scarred from the ordeal as one would think, but instead have grown into whiny, stereotypical asshats, and apparently are just as stupid now as they were back then and do the same damn thing at a party out in the middle of nowhere – and guess who they get on the other end of the line…again? Yep, same axe-wielding maniac that butchered the parents and spared their lives for the sake of plot advancement and to give Rutger Hauer something to do as a police detective for about five total minutes of screen time throughout the flick, showing up here and there and emoting (or was it looking bored and wishing that his career had taken off like Harrison Ford’s? Or these days, even Sean Young’s?), picks up the phone, and is just as pissed as he ever was…so guess who winds up being a party crasher?

RAMBLINGS:
Sorry, folks – that one was more of a LONG Fix, but seems I have a lot to say about this one. Originally called 7EVENTY 5IVE (very cool title, by the way), I can very obviously see how big of a part the SCREAM series played into influencing this flick, and I’m all for that – personally, I think two of the best horror movies to come from the 90s were the first two in the series, so yeah – I’m not at all opposed to something influencing a cool phone prank-style horror flick with a crazy killer. In fact, I whole-heartedly welcome it.

But…damn. It has to be done on a somewhat entertaining level. This flick, with its awesome opening, had all the potential in the world to have been a fun, goofy, no-brainer of an old-fashioned slasher tale with an “ooops, I did it again” plot twist to bring a long-dormant killer back into play to finish the job he left open so many years before. Unfortunately for us, the audience, though, it quickly derailed and degenerated quickly after the credits into just another boring tale of a bunch of sh*t-talking, overly stupid silver-spooners bitching at each other and doing ridiculous things just to serve the plot and keep the movie plodding along for the majority of the running time.

I’ve said it many times before – even with indie flicks that I’m MUCH easier on than Hollywood stuff with big budgets – if the story isn’t there, I will not care – the writing’s gotta be there, folks. Not a single one of these whiny brat f*ckheads was I able to cheer for, nor was I really able to give two sh*ts about a killer so idiotic that, one – he didn’t finish the job in the prologue; and two – he’s not stealthy at all…he shows up crashing through a window, waving his axe all around, not really caring if they know he’s there or not. But maybe he knows something….maybe he knows that it’s not gonna matter and that the kids are so stupid that when faced with a three-on-one situation they don’t take his ass down, they run the other way and cry behind a locked door. WHAT??!! This dude is mortal, not Freddy Krueger…gang up on him and kick some maniac ass!!! How else are you supposed to set up the “he really isn’t dead at the end” scenario and make it look cool? Think, McFly, think!!!

I really, really tried with this one – hard – because I really, really wanted to like it. But try as I might, I just can’t. By half an hour in, I was wishing that at that exact moment, the government would decide to do some nuclear testing on that particular house in the middle of nowhere and put us all out of our misery. If I have no one to root for, even the killer, in a slasher flick, there’s nothing that’s going to make me want to watch it again or recommend it to anyone else. This is what happens when you get in a hurry and film your 2nd draft without really reading through it and thinking things through before filming the story. With another couple of polishes on the script, maybe this could have been the really cool slasher flick that I wanted it to be. But with whiney, hateful characters; bad plot development; constant p*ssy moves by main characters; and a groan-inducing “shock reveal” plot twist/open ending that even my six year-old son would have seen coming a mile away, this was nothing that I care to revisit.