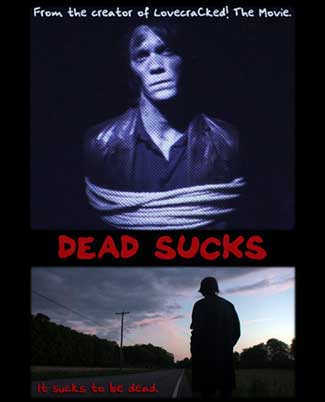 Introducing Burt, a wayward vampire with a messy past, an uncertain future and a disproportionate need for sleep. Rejected by both humans and his own kind, he searches to find his place in a world where the only thing that sucks more than being alive is being dead

Greetings Boils and Ghouls and welcome once again to Indie Scares. Today we’re doing another double feature, this time from the folks over at Biff Juggernaut: a short film entitled Dead Sucks and a feature titled Lovecracked

Dead Sucks is a nine minute short film about Burt (Jerrod Bogard), a vampire who is tied to a chair and telling an unknown captor about himself. For most of the short, Burt is telling his captor about his life as a narcoleptic vampire and is shown trying to kill himself in various ways (by hanging, shooting himself, etc. all of which are unsuccessful). He manages to be both convincing in his depression and also hysterical in his failed suicide attempts.

Sadly, that is all there is to this film. Dead Sucks is being shown around right now to raise the money needed to produce the feature length version. This short has me intrigued, what could be so bad about being a vampire that Burt wants to kill himself? Why is Burt tied up? What the f*ck is going on?

Dead Sucks is awesome and you can check out the trailer over at www.deadsucks.com

Now, we come to Lovecracked. Imagine if you will, if you were to take the Monty Python crew, lock them into a room with Matt Stone and Trey Parker of South Park, a lot of drugs and a stack of H.P. Lovecraft novels, and you’ve essentially got Lovecracked.

Lovecracked is an anthology film tied together by an inept investigative journalist who is supposed to be doing a show about H.P Lovecraft. The journalist is more of a bookend/comic relief piece between the shorts. 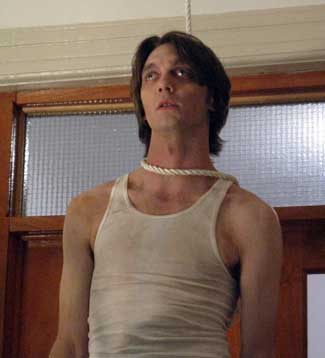 Some of the shorts, like History of the Lurkers or The Statement of Randolph Carter, seem to be played more for laughs then for horror but fit in well with the goofy reporter segments. They help to keep the viewer off guard for when the sh*t finally hits the fan with some of the creepier and sometimes downright scary segments. Remain (one of my favorites of the shorts) is a stop motion piece but instead of puppets it’s a human being, lending the story a surreal and terrifying quality. Alecto is another of the shorts that is genuinely creepy and unsettling, not because of any single scary image but because of the way the mundane is twisted into terror. These shorts remind you that despite the sometimes silly goings on of the journalist, that this is still an anthology about H.P. Lovecraft.

One of the strangest of the shorts And This Was on a Good Day is a bizarre acid trip animation sequence featuring a tentacle demon arising from Lovecraft’s toilet, a vagina that spews blood and Lovecraft f*cking a television. I’m not entirely sure as to what the hell this short was about but in some kind of sick and twisted way it fits in with the rest of the film.

Sadly, like every anthology film at least one story falls flat on its face and in this case it’s Re-Penatrator. Originally an X rated parody of the 1980 Stuart Gordon film Re-Animator, in this film it’s presented as a heavily edited R rated version. It’s a pointless short that really has no place in the film and fails at both being arousing, funny or entertaining.

Despite the sometimes uneven pacing of the journalist segments and sometimes uneven quality of the shorts themselves, Lovecracked manages to be both incredibly entertaining and downright creepy. The film only runs about eighty seven minutes and by the end I felt like my time had been well spent.

Well Boils and Ghouls, that’s all I’ve got for this episode of Indie Scares. I highly recommend you go and check out the trailer for Dead Sucks and go buy a copy of Lovecracked. Check back here in the coming weeks as I’ll be posting an interview with Elias from Biff Juggernaut.

Until next time, I’m Cenobite Dave, and I’ll see you all the next time you venture into the Labyrinth.