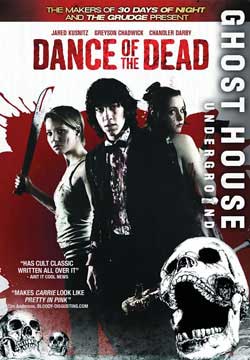 It is prom night in middle America. Tuxes have been rented and dresses have been bought. But when the dead unexpectedly rise from their graves to eat the living, it’s up to the geeks, the nerds, the outcast and the losers who couldn’t get dates to the dance to save the town from the undead. Unlikely heroes will rise to the challenge as they are forced to put aside their differences and band together to fight for their lives. Armed with bats, sledgehammers, garden tools and guitars, this rag-tag group of high-school teens are in for a prom night they will never forget.

I saw Dance of the Dead, because I had read positive reviews of a recent zombie comedy. Horror and comedy is a mixture that exploded in the past decade, especially with zombies due to the success of Shaun of the Dead. Often when a horror subgenre explodes there are usually a lot of terrible movies trying to imitate the success of the trend starter, which leads to skepticism. Despite a lot of positive reviews I was skeptical of how much I would enjoy Dance of the Dead, especially considering the high school setting. Normally I hate stereotypical high school characters in movies, such as the bully, the rebel, the nerds, and the female over achiever, but Dance of the Dead played these stereotypical characters charmingly during the zombie outbreak and definitely made for some entertaining dialogue while smashing zombies in the face.

The movie starts in a cemetery as with shots of a nuclear power plant spewing gases in the background. The groundskeeper of the cemetery nonchalantly chops off the arm that sprang through the ground. The cemetery groundskeeper is a very funny character most reminiscent of Rupert Everett in Cemetery Man as all he does is try to keep his job in the face of a zombie outbreak. The first part of the movie is spent getting to know the characters left behind or never make it to prom night, the nerds of the Sci-Fi club, Jimmie the rebel, his overachieving girlfriend Lindsay, Gwen the cheerleader, Kyle the bully, and the garage band boycotting the dance because they aren’t playing. The sci-fi club was exploring the cemetery when the zombies started coming out of their grave en masse.

As the sci-fi club, Jules, Steven, and George run the zombies were literally springing through the ground as dirt explodes all around them. Kudos to the director, Greg Bishopp, for creating one of the coolest rising from the grave scenes I have seen in years. After running through the cemetery the Sci-Fi club meets up with Lindsay and whole up in a funeral home. Jimmy, Kyle, and Gwen are the other group that meets up on the streets of the zombie outbreak. Jimmy manages to unite his group with Lindsay’s. Realizing that the zombies will be attracted to the largest crowd of people in town tonight, the high school prom, the group decides to save the prom or go down fighting. On the way to the prom the group picks up more soldiers in their army, Coach Keel and the local garage band. The garage band discovers that when they play music the zombies become tame and sway to the music and Coach Keel is a military nut with a myriad of weapons in his garage that the group can use to stop the spread of zombies.

All the previous reviews for this film were extremely positive, but I was skeptical because all of the characters were typical high school teen stereotypes, but Dance of the Dead used the stereotypes to its advantage. The character interaction made for some very funny dialogue such as when members of the Sci-Fi club exclaimed how happy they were Kyle, the bully who beat the crap out of them was with them. The cast was big enough that it doesn’t beat you over the head focusing on one teenager’s problem.

The make-up and gore of the zombies were good quality and fun to see. The visuals in Dance of the Dead were classic zombie film with slow moving zombies where the horror relied on the sheer numbers. Every zombie fight scene was masterfully done blending the right amount of comedy with the right amount of action. Each cast member of this film is a relative rookie, but they all put on excellent performances that really make the sometimes cheesy dialogue work.

Dance of the Dead is one of the best horror comedies in recent memory. It’s refreshing to know that with so many subpar attempts at the zombie comedy that someone can still get it right.

Tags Dance of the Dead