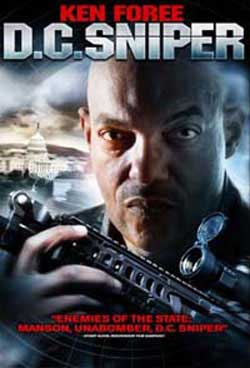 Based on true events, “DC Sniper” follows John Allen Muhammad and Lee Boyd Malvo as they terrorize the DC area in October of 2002. The unstable pair was responsible for the deaths of several innocent people (most in broad daylight) and held the area in the grip of terror for three weeks until they were finally apprehended. This film gives not only gives us insight on the pair’s bizarre relationship but takes us inside Muhammad’s demented mind as well.

I remember first hearing about these shootings on the news back in 2002 and to be honest it scared the hell out of me. It was a very frightening situation to be in and I know I would have been terrified if I had lived in the area while the events were taking place and probably wouldn’t have left the house the entire time everything was going on. I have always had a fear of an unseen sniper opening fire in a public place, so as such I was really bothered by this case. While I don’t know all of the details surrounding these events and am not sure how accurate the film is (I’m sure the filmmakers embellished some things for entertainment value), overall I was pretty impressed with “DC Sniper.”

I think that one of the things that I liked the most about the film was that it got into Muhammad’s mind and showed us what type of person he really was. I knew that he obviously wasn’t the most stable guy in the world but I had no idea just how out of touch with reality he actually was. We learn that he thinks he is doing the right thing by killing innocent people and I was quickly reminded of the excellent (and very underrated) Bill Paxton film “Frailty.”

If you haven’t seen if Paxton’s character goes on a killing spree and claims that he does so because God told him to do so. While Muhammad doesn’t quite claim that God told him to kill people his motive is still similar as he truly believes he is murdering random innocent people for the greater good. There are a series of scenes in which Muhammad (played by film co-writer Ken Foree) talks to the camera and gives us several reasons why he did what he did. Each scene is well-done and quite chilling, and while I am normally not a fan of Foree I’ll have to admit he does a convincing job. I do know that after watching the movie that I really have no desire to ever run across someone like Muhammad in a dark alley.

“DC Sniper” also does a great job of showing us the relationship between Muhammad and Lee Boyd Malvo (Tory N Thompson), the young man who does the actual shooting (thanks to Muhammad’s goading). Muhammad tells Malvo that he is “The Chosen One” and basically just brainwashes him into doing whatever he wants. He tells him that he is destined to be a great leader one day and because Malvo is one of those people who is easily manipulated he believes it. We find out later that Malvo was actually remorseful for what he did but I had little sympathy for him and think that he pretty much got what he deserved for his actions (he ended up getting life in prison without the possibility of parole). While we were watching the movie my wife said that she couldn’t help but feel sorry for him but I have to disagree. He knew what he was doing was wrong and even though he was an impressionable young man who may have been brainwashed I still find it hard to feel bad for him.

“DC Sniper” is a powerful film that does an excellent job of showing us the inner workings of a madman. With the exception of a couple of flows (I really didn’t care about the subplot involving the arresting agent’s strange relationship with his daughter who worked in p*rn that was pointless and seemed to go nowhere) I enjoyed the movie. I thought that it was well-written and shot, had wonderful acting and had a very disturbing vibe to it. To me it is terrifying that a person like John Allen Muhammad could be out there lurking around in the real world. Hopefully nothing like this will ever happen again but considering the state of the world these days I have my doubts.