Book Review: Installing Linux on a dead badger and other oddities – Author Lucy A. Snyder 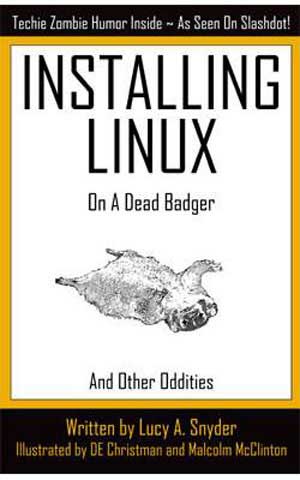 INSTALLING LINUX ON A DEAD BADGER AND OTHER ODDITIES

“LET’S FACE IT: any script kiddie with a pair of pliers can put a red hat on a Compaq, his mom’s toaster, or even the family dog. But nothing earns you geek points like installing Linux on a dead badger.”

One of the first things you pick up on while wallowing in the muck of GREAT LITERATURE in an attempt to totally waste several years of your life pursuing a lit degree (I actually make less now that I have the degree than I did when all I had was Lib Arts, dammit!) is that satire absolutely in no way whatsoever equals funny. Quite the opposite, in fact. Often, it equals hours finding a way to spew back the same “deep” thoughts about it that your prof was shoveling into your face without erupting into voluminous amounts of profanity and gesticulations. The great authors of the ages never managed to elicit even a chuckle whilst they so eruditely attempted to rip their society a new one. So then how the hell does this young lady have the temerity to deliver biting criticism and positively ruthless satire of corporate culture in a way that is positively exploding with full-out belly laughs. Fucking presumptuous bitch!

The title work is a very straight forward users guide to exactly what it says. Using the blank, bland overbearing language of pretty much any badly written tech manual that exists, the reader is walked step-by-step through the process of turning roadkill into a useful weapon. Somewhere in the process of this, she combines the geeks worlds of computer savvy and abject Lovecraft/Romero worship without batting an eye and makes the immeasurably tedious into the insanely hilarious. At least if you fit into the previously mentioned categories. Better yet, people that actually know sh*t about the flickering gnome filled boxes some call computers (not me, that’s fa sho) have told me that she got those portions dead on the money and I’d put my union membership on the line that she sure as f*ck got down the calls to the Ancient Ones (IA! motherf*cker, IA!).

From there things get more bizarre with articles on the uses of the dead and undead in the corporate environment. Let’s face it folks, to be competitive in todays market, you have to have an edge and nothing provides that edge like a direct link to the outer realms and alternate dimensions of madness. Plus, think of all the money you can save if you never have to give your menial employees a break and you can pay them mostly in cow brains. Sure, the whole hungering for flesh thing can be a bit of a logistical problem, but that is where the Vampires come in (middle management has always seemed like a kind of half-death anyways). The only downside is that living people cannot get a damn job unless they live up to the L7 song.

What really makes all of this work is her deadpan delivery. There is no winking at the audience, no tut-tut-nudge-nudge, no guffaws or pratfalls. Everything is presented as straightforward and factual and everyone is completely dead (hehe) serious about what they are saying. It takes a rare comedic talent and a ton of restraint to let the humor speak for itself like this.

But, “So what!” You say. So she can write some faux articles that have geeks rolling in the aisles… what about actual writing? You know, stories? The kind with plots and characters? Well, d*ckweed, it just so happens that the last three entries do exactly that. “The Great VuDu Linux Teen Zombie Massacree” perfectly takes the material from ILOADB and illustrates the practical use of your reanimated badger in a real life situation.

To be honest, while “Wake Up Naked Monkey Your Going to Die” is interesting and pleasantly surreal, it doesn’t stand up next to the rest of the material presented, but “In the Shadow of the Fryolator”… holy hell! Witty, funny (there is a difference, dammit), honest and full of all kinds of crazy sh*t, including but not limited to miniature giant squid-god calamari and proposed couch sex. 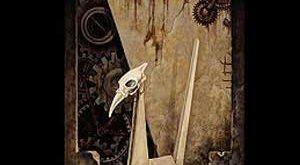