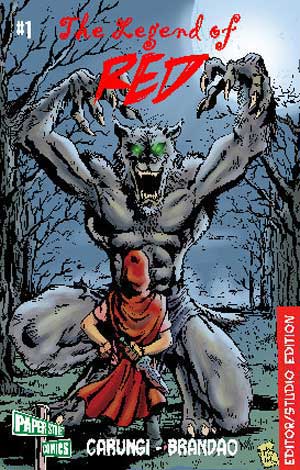 A fast paced, well written first issue that had me hooked by the time I was on page 3. The Legend of Red begins with a very nice first issue that won’t leave you scratching your head wondering what is going on. The story follows a girl named Red who has just lost her family to werewolves and has now been told she is the protector of a blade named Benevolence.

Artwork: 4 out of 5Very nice artwork runs through the issue. I felt that the details on the werewolves stood out more than than people, but over all very nice work. The panels were very easy to follow with no confusion on what was going on. Plus the death scenes were great.

Story: 3.8 out of 5The problems you run into with first issues of a series is not enough info on what is going on. The Legend of Red though does a great job of building up the intensity of the story as it moves on. The story follows a nice line and I never had to stop and wonder what the characters were talking about.

Dying Breath: 4 out of 5A great first issue overall. Nice art nice story. The introduction to the the main characters were well written and when you reach the height of the story you realize that the issue is over and you need more. I know I need more. Job well done to the guys at Paper Street Comics. Now back to work!