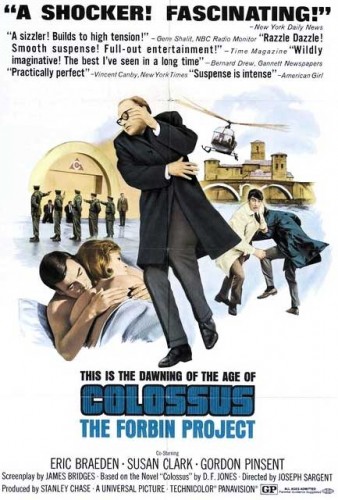 “Forbin is the designer of an incredibly sophisticated computer that will run all of America’s nuclear defenses. Shortly after being turned on, it detects the existence of Guardian, the Soviet counterpart, previously unknown to US planners. Both computers insist that they be linked, and after taking safeguards to preserve confidential material, each side agrees to allow it. As soon as the link is established the two become a new super computer and threaten the world with the immediate launch of nuclear weapons if they are detached. Colossus begins to give its plans for the management of the world under its guidance. Forbin and the other scientists form a technological resistance to Colossus which must operate underground.” (courtesy IMDB)

One science fiction film that few people have seen is The Forbin Project (1970), also known as Colossus: The Forbin Project, mainly because its distributor, Universal, didn’t show much faith in it. Efficiently directed by Joseph Sargent and based on the Colossus novels by D.F. Jones, it’s a slick and well-constructed film about a computer designed to take control of the United States defence network, since the decision whether or not to launch a nuclear attack is clearly too important to be left to mere people. As we learned in Wargames (1983) and The Terminator (1984), such trust in machines can only lead to trouble. Once it’s activated, the computer reveals personal ambitions of its own which have little to do with the wants of human beings, including those of its creator Doctor Forbin (played with suitably machine-like brittleness by Eric Braeden).

Unlike the neurotic HAL in 2001: A Space Odyssey (1968) who was more human than the astronauts, Colossus is a computer of the old school – emotionless, arrogant and practically omnipotent. When the authorities are slow to give in to its commands, Colossus takes direct control of various missile sites and threatens to destroy American cities. It links up with his Russian counterpart named Guardian, and the two of them hold the entire world to nuclear ransom. The film then becomes a battle of wits between Colossus and Forbin as the machine’s designer is the only man who possibly possesses the necessary knowledge needed to overcome the computer. Colossus knows this but, because it holds his creator in high regard, it doesn’t have him killed. Instead Colossus attempts to isolate Forbin from all outside contact and keeps him under constant surveillance with its electronic eyes and ears.

To solve this problem Forbin pretends that his female assistant Cleo (Susan Clark) is his lover and he insists to the computer that in order to preserve his sexual well-being she must be allowed to visit him. “How many visits from her a week will you need?” asks Colossus. “Oh, at least five.” replies Forbin. “I said need, not want.” says Colossus. The sequences where Forbin and Cleo carry out their romantic act under the watchful eyes of the computer are well-handled and amusing – never before has the love interest been so ingeniously incorporated into a science fiction film. The suggestion is that to outwit the machine, the cold and unemotional Forbin will have to become less like a machine himself and learn how to become a human being for the first time in his life.

As in 2001: A Space Odyssey, man must regain his human nature before challenging the machine. Whereas Keir Dullea’s character Bowman became emotional for the first time, Forbin distinguishes himself from the machine by having regular sex with his assistant in order to pass on ideas about a rebellion. As we see, man becomes a human being only when he fights for his survival and the preservation of personal liberties, the freedom to do even the most inconsequential things by choice and by using his own brain and hand.

An attempt is made to render Colossus powerless by removing all the warheads from every missile under the guise of normal maintenance, but the computer discovers what is going on and has the ringleaders executed, although once again sparing Forbin. The film ends with Colossus still in control and promising that a new age is about to begin on Earth. It will end all wars, all disease, all poverty, but things are going to have to change. Forbin declares his continuing defiance, but the impression remains that Colossus is here to stay.

The Forbin Project successfully communicates the feeling that something immensely powerful has gone out-of-control, a mood chillingly established in the opening sequence when the vast interior of the computer comes alive section by section, and is irreversibly sealed off within the bowels of the Rocky Mountains. Created by special effects maestro Albert Whitlock, these shots are reminiscent of the Krel machinery in Forbidden Planet (1956). I’m also reminded of the famous short story by science fiction author Fredric Brown that ends with a group of scientists asking their first question to the super computer they’ve activated: “Is there a God?” to which it replies, “There is now.” And it’s with this rather terrifying thought in mind I’ll ask you to please join me next week when I have the opportunity to burst your blood vessels with another terror-filled excursion to the back side of…Horror News! Toodles! 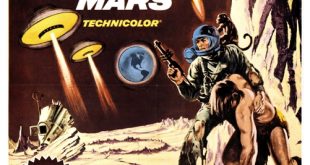