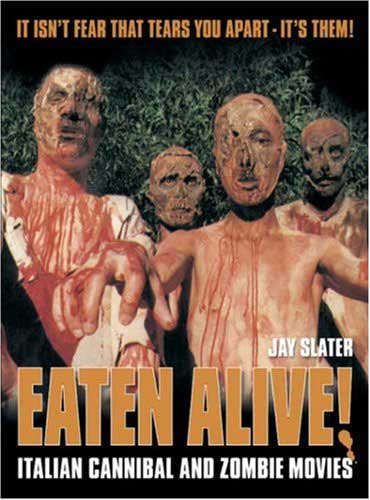 Think you know everything there is to know about the Italian zombie and Cannibal movies that made up such a fascinating chunk of horror history? Think again! This edition of this excellent book was originally released in 2006, and while the mentions of the modern era are a little dated now, the wealth of material and opinion on films both iconic and obscure is compelling and utterly engrossing. This an essential book for any fan of the zombie and cannibal movies that were the staple diet of so many of today’s best creators.

Editor Jay Slater has amassed a great range of material from a mixture of both journalists and movie-makers, including Brian Yuzna, Kim Newman, David J. Schow, Lloyd Kaufman and many more names that will be familiar to the hardcore horror fan.

The analysis of each movie is offered in a straightforward and welcoming fashion rather than a scholarly tone that would turn some readers off. It’s wonderful to enjoy the enthusiasm and respect that each writer has for the subject matter they’re covering, and while the films themselves may not be that brilliant, it’s fascinating to look into their construction and their most infamous scenes. All of the classics from Fulci, Deodato, Romero and more are present and correct, alongside the lesser-known entries and some that many people won’t even have heard of.

There’s a certain glee to the descriptions of ultraviolence and gore in the movies the book covers, so it’s not really for the mainstream reader (although you can probably tell that from the title, cover and the subject matter!). The book is blessed with a huge amount of visual treats, packed as it is with rare art, poster images, covers and stills.

There is also a succulent colour section featuring reproductions of posters for some of the definitive films of the genre and the time. Something I found of particular interest was the Of course, you may well disagree with a few of the reviews, but you can’t argue with the detail and the research that has gone into this book. Far from being a bore, Eaten Alive! Offers something substantial for the real fan of the Italian masters in all of their badly-dubbed, oddly-edited glory.

The book closes with some fascinating notes on the films covered, along with a comprehensive filmography, making it an indispensible guide to one of horror’s true cult subgenres.