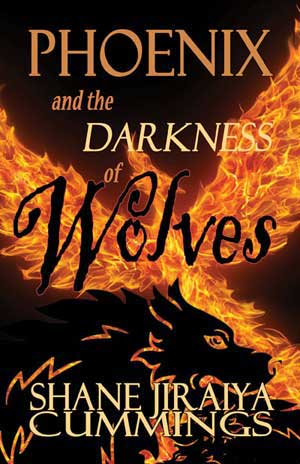 PHOENIX AND THE DARKNESS OF WOLVES

What’s the deal with Australia as a post-Apocalyptic wasteland? I certainly wouldn’t figure them to be the first target for a full out nuclear barrage. Then again, if anyone could survive alongside the c**kroaches and Little Debbie snack cakes, those crazy ass Aussie’s would certainly have my bet. That said:

Australia is no more. Gone in a blast of flame that destroyed every living thing on the continent. Across this blasted landscape runs a lone man, Damon. Don’t worry, we’re not in Mad Max territory again. Unless I fell asleep during the part where Max was hunting a Phoenix in the hope of using its magick to restore his family’s humanity. A family which has been stuck in limbo, only visiting him for a few scant moments at sunset as wolves made of shadow and who are, in turn, hunting him in the hope that his death will free them. Let’s just pretend that the back page doesn’t have the super-corny “The Hunt is on!” and get into this puppy.

Phoenix hunt aside, Shane Jiraiya Cummings does a good job of giving the story a firm foot in solid reality. This is a man, some rocks and a whole bunch of soot as lone inheritors of the world and I could readily believe that. The hardships that Damon endures in this world are easily recognizable and, therefore, quite sympathetic. It is easy to imagine the annoyance of constantly being caked in dust and unable to wash it away. It isn’t a stretch to picture the choking thirst, rarely slaked by the unfiltered and filthy, brackish water. The loneliness and sense of guilt over the loss of his family. I’m with him on all of that.

This sense of reality helps smooth out the more fantastic features. After all, if we already believe in his world, why shouldn’t we also accept that magick is and always has been a part of its natural physics. Even the shadow wolves, phoenix and the charred hulking remains that litter the countryside feel like perfectly natural outgrowths of everything that has been established.

The mystery of what happened, why it did and why this guy is so determined to run down a flaming bird at the end of his world is put together in an intriguing fashion. The tidbits of information are doled out regularly enough to keep interest and they are stacked well enough to build curiosity. It all makes for an engaging setup.

Unfortunately, I can’t say as much for the payoff. After the time invested in the plight of Damon and his family, I expected quite a bit more than what I got. Further, the preceding events were presented with such patience that the end seemed rushed. I get the sense that this could and should have been a much longer work that either fizzled or was pushed out the door before it was ready. Or maybe I am more wrapped up in the potential of the story idea than the story itself.

Additionally, there’s the price. As a fan of indie presses, I know I will have to pay more to help offset the much higher overhead and I’m okay with that. Still, almost ten bucks for an 87 page story is a little hard to choke down. Dead Cat: Bigger than Jesus was worth it but I’m not sure about this one.

On a bit more of a nit-picky note: The idea of this magickal nationwide conflagration as a substitute for nuclear devastation seemed pretty clear to me from the get-go, especially when used in response to the powerful invading forces (in the form of giant monsters that have begun attacking Australia). Shane’s determination to explicitly mention the likeness to a nuclear attack struck me as unnecessary and a bit insulting. Whenever somebody makes it that clear to me that they think I cannot parse out their intended subtext, I feel like they are calling me stupid and they loose me.

Overall, I appreciated the sense of realism and the way that the mystery of the events was put together, but I feel a bit cheated.

Tags Phoenix and the Darkness of Wolves Shane Jiraiya Cummings