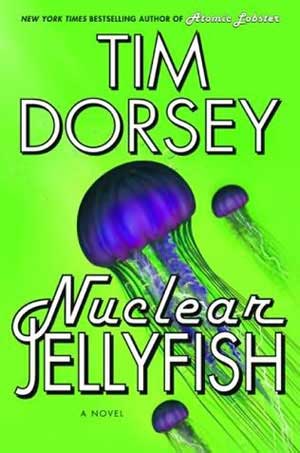 So you’ve seen the picture of the book cover above in all of its neon green splendor. Then there’s the title: Nuclear Jellyfish. Maybe you even know a bit about Tim Dorsey. So you’ve got a question… why is this being reviewed at a website dedicated to HORROR. Well, first off, you come across as a bit of an elitist bastard and maybe you should quiet down and let the big boy talk for a moment before you make up your mind. Didn’t your momma ever tell you about prejudice and book covers or what happens when you assume? If this sh*t doesn’t fit in with horror, then we need to do some redefining at the Union meetings. You like serial killers? Blood? Guts? Sex? Drugs? Rock N Roll? Florida?

Okay, I may have lost some of you there, but keep in mind that state was home to some damn fine death metal and the one, the only Ed Goddamn Lee. Getting back on track, you’ve got all of that and more here so don’t dare tell me it isn’t horror just because it also has laughs. Serious, convulsing-belly-dear-god-I-can’t-breathe-and-my-muscles-are-starting-to-ache-and-my-brain-is-getting-oxygen-deprived-making-the-room-spin-around-me-possibly-explaining-this-really-overdone-hyphenated-statement-that-never-seems-to-f*cking-end-and-stopped-being-funny-before-the-first-actual-sentence-finished, ass over hips kind of laughs that make the other people on the bus look at you as if you just told them all about your basement chamber of Jehovah’s Witnesses.

This is the eleventh chapter in the collected adventures of Serge A. Storms, a semi-psychotic, occasionally murderous, constantly scattershot, virulently Floridian historian and freelance crime fighter with severe combination of ADHD and OCD who has moral issues with taking his meds. Along with his stalwart adopted chemically induced man-servant Coleman, he has decided that his newest purpose in life is to add to the glory of his much loved home state Author hooking up with the biggest travel sites on teh intarweebs. Those bastards never give tourists information that they really need, like warnings about barracuda prostitutes and rest stop RV repair scams or even homicide grids. Unfortunately, in the course of his research, he becomes embroiled in a scam run Author an incredibly rude crew of diamond thieves and if there is one thing Serge can’t stand, it’s rudeness. To make matters worse, his old nemesis, forties-noir obsessed Agent Mahoney, is back on his tail and some unknown character appears to be after his head. And Serge has been losing it more than ever, blacking out and pulling guns on his friends.

Everything that has made all of Dorsey’s previous books work is here, which is a bit of a double edged sword for him at this point. The characters are insane, but fairly believable (especially Coleman, who is the epitome of every die-hard life long stoner I’ve ever known). The dialog is snappy and infinitely quotable (“It’s been said that inside every life is a fascinating book, or at least a chapter. Wrong. Some People don’t have a freakin’ semicolon.” for example). Dorsey’s voice is both confident and rambunctious, like an absurdist Elmore Leonard or an actually funny Dave Barry, easily conveying the haphazard chaotic mental processes of the main character. And of course there are those wonderfully complex Rube-Goldberg devices of death and mayhem. This is as great as anything that Dorsey has written before, and that ain’t no small cheese.

Unfortunately, it’s not any better or really all that different. This is no problem at all for rabid Serge-ophiles like myself and my wife, but it won’t do anything for anyone else. Worse, there is only so long before it gets boring and even Serge himself faces that specific potential problem over the course of this book. As much as I don’t like to say it, I’m finding myself hoping that Dorsey at least puts this character aside for awhile, if for no other reason than to see how he approaches something different.