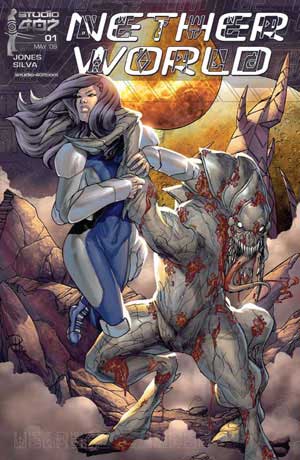 “Netherworld” has alien zombies. Most people will probably make up their mind about this comic after that statement alone, but let me continue. Netherworld is about two reluctant scientists, Emily Hark and Ernst Voss, drafted into a mission to retrieve enemy alien technology from a world where inexplicably all the aliens had died. Humans and the Thanati are in a cold war over planet colonization due to the fact that both planets have similar environmental restraints. The setting is an obvious parallel to the U.S. and U.S.S.R. cold war.

Emily Hark is a Thanati sympathizer and one of the few experts on Thanati culture and biology. This leads us to believe that if the crew does encounter trouble it will be against alien members of a highly intelligent sentient species. Hark and Voss are accompanied by the same seemingly simple minded and jingoistic space marines we know from such films as Aliens and Starship Troopers, complete with a rip off of Bishop. The first two issues follow the Aliens shoot and kill formula when Hark and the marines discover that the seemingly inert dead Thanati have awakened as mindless beasts bent of devouring flesh. Hark deduces that the planet’s strange radiation has shut the brains of the aliens, but caused a mutation that rewires their nervous systems to feed off the radiation, there by making them mindless beasts.

No, this is not your typical zombie, but our interpretations of what makes a zombie now days are so convoluted that I think radioactive zombie aliens are a welcome addition. Another interesting story twist concerned Hark and the marines taking refuge in an alien temple thinking they would be safe, because it wasn’t the Thanati’s day of prayer. So far the only character I have taken a liking to is Emily Hark. Hark’s diplomatic views display a positive sensibility as to issues of war capable of destroying two civilizations. All the other characters seem to be one dimensional, especially the space marine, King, who just comes across as a cheesy Samuel L. Jackson.

The art by R.B. Silva is solid, but nothing spectacular. The Thanati aliens have a pretty typical design, exo-skeletal body, sharp talon like claws, giant sharp teeth, and a big tongue. They have qualities of the Venom, the Spider-Man villain, and the White Martians from the pages of JLA. There hasn’t been a truly original alien design in years. When a books setting crosses a galaxy, you have the opportunity to create truly frightening characters. Why go with Venom light?

The first two issues of Netherworld explored some interesting territory in political satire and sci-fi horror mythos, but I’m more looking forward to when the Thanati realize there are humans on their planet.