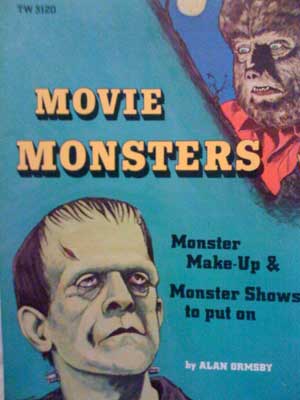 Hello Maniacs! In the Horror entertainment field, you are always looking ahead. You’ve got to keep a finger on the pulse of things to come.But, here in the Vintage Zone, we pause, and look back at treasures that will tickle your “vintage bone”. Everything from books to toys, will be discussed here. Each has a certain spot in somebody’s monstrous heart.Some items will be common, while others may be rare and forgotten about(shudders). Maybe there will be something you’ve never heard of. We’re going back to 1975 for today’s item. Now, at this time Monster stuff was all around.Magazines, toys, models, novels, tv and movies, etc.

As a kid in my short sleeved mock turtle neck, and plaid pants (what?you didn’t dress that way?), I was in Monster Heaven! So, let’s go back to that time and head over to the bookshelf to examine the first of our items. (Blowing dust off a book). This is a childrens book, titled “Movie Monsters- Monster Makeup &Monster Shows to put on” by author Alan Orms. Published in 1975, By Scholastic Book Services. This one still has it’s original bookfair pricetag of $0.95.

It’s 80 pages long, and broken into three basic sections. The first is a overview of famous monsters from film. Pictures and a brief summary of each monster are given. The monsters are Frankenstein, Dracula, Dr. Jekyll&Mr. Hyde (which has pictures showing the transformation of Frederic March from Jekyll to Hyde), The Bride of Frankenstein, King Kong, The Creature From the Black Lagoon, Blacula, Wolfman, even Lon Chaney Sr. gets mentioned with his own page, as well as Phantom of the Opera. Orms gives homage to the monster “heroes”, but he also gives the reader an insight to what made those monsters. He describes the Frankenstein makeup as being made of rubber, cheesecloth and paint. , being layered Author Jack Pierce.

He let’s you know King Kong isn’t real(shucks), Author telling you it’s steel and rubber(which would be an animation armature). He gives a nod to Kong’s animator Willis O’Brien, and his filming process of stop motion animation. The Mummy makeup gets described as being layers of chemicals, paints, rubbers, rotted bandages, tissues, beauty mud, and other goo. OrmsAuthor doesn’t spend a great deal on the other monsters. One would think it was due to being too simple a makeup. So instead, he then describes the films they appeared in.

The second section covers how to actually do your own monster makeups. Starting with an insight to his own monster makeups as a twelve year old kid. He then gives suggested ways to pracitice “being a monster”. Again, you can tell he loves the whole idea of excercising his imagination and transforming into his monster movie heroes. Here Orms provides illustrations and descriptions to become a monster, including costume suggestions. Recipies for blood, weird warts, scars, melting hands, wolfman hands, are covered in detail. Monsters described here, are-The Bride of Frankenstein, Blacula, Countess Dracula, Mr. Skull(generic character), Dracula, The Phantom of the Opera, Wolfman, and my personal favorite: The brown bag Frankenstein! (Yours Drool-ly and his sisters tried this one. ’nuff said!)

Each makeup is broken down into easy to follow steps. Most of thematerials needed can be found at home or the local hardware store. Here is where Orms seems most comfortable, in his illustrations and descriptions. The last section is a script for a play. This is geared to use your newly created monster makeups. It even has stage directions. The suggested cast includes: An Announcer, R. Frankenstein, Igor, Mr. Skull, Dr. Jekyll & Mr. Hyde, Dracula, Frankenstein Monster, and Wolfman. It’s 6-7 pages at best. But, you could imagine a group of kids doing this in your neighborhood. Also in this section, are a couple tricks.

The Disappearing Ghost, The Floating Head, and How to transform yourself from Dr. Jekyll to Mr. Hyde. This is a great book for any age level. It’s not sterile in tone, such as a text. It’s clear OrmsAuthor enjoyed the subject. It’s packed with great monster information for anyone interested in them. On a personal note, this is definitely an inspirational book. As a little monster, this book thrilled me!It still does today!

It can be found in the secondary market, with values going from $15. – $25. 00 in good condition. It would be a great addition to any monster lovers library.

About Alan Orms:
Orms has since worked in the film industry, as makeup artist, screenplay writer, producer, director. Some of his credits include “My Bodygaurd”, “Popcorn”, “Cat People”, “Deranged”, “Children Shouldn’t Play With Dead Things”, etc. Another accomplishment OrmsAuthor did, was being largely responsible for the creepiest 70’s toy-Hugo Man of a Thousand Faces.

Hope you enjoyed the look back, and hope you’ll join me again, in the . . . Vintage Zone