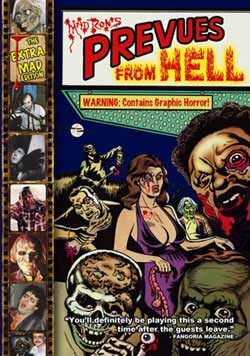 SYNOPSIS:
A horde of zombies descend upon a local movie theatre ready to enjoy the evenings show. Tonight is a very special night for the undead since projectionist “Mad Ron” has decided to show the audience some of the greatest grind house and exploitation film trailers from the 1970’s and early 80’s….Just don’t mind the couple who seem to be “necking” beside you.

“Do you know what this is? It’s a corpse grinding machine!”

Long before genre fans got their prevue fix from websites like YouTube, and even before the DVD releases of Shock Festival and the 42nd Street Forever series there was Mad Ron’s Prevue’s From Hell that trailer junkies got their fix from.

Mad Ron’s Prevue’s starts by showing a couple of zombies making their way towards the local movie theatre, as the couple makes their way inside the viewer is offered a glimpse of some classic film posters from yesterday. The zombie’s stop briefly at a “concession” stand that offers various severed body parts and of course popcorn which the zombies squirt blood onto so that they can enjoy it. After this short but entertaining bit we are soon introduced to our “hosts” which are Nick Pawlow and a zombie puppet known only as Happy. Once Nick and Happy see the two zombies come into the theatre they let “Mad Ron” down in the projector room to cue something up for them. In a matter of seconds the screen is soon saturated with wonderful scenes from the classic double feature I Drink Your Blood and I Eat Your Skin, it was at this point in the film that I realized that I was about to really enjoy myself.

For the most part Mad Ron’s Prevue’s From Hell is simply a collection of horror film trailers from the 1970’s and 80’s and in between some of the trailers the viewer is granted a look at the group of zombies who are watching the trailers from inside of the theatre or a small comedy bit featuring Nick and Happy. The makeup for the zombies in the crowd ranges from not so good to really quite excellent depending on which segment is shown. Some of the scenes with the zombies involve one eating another ones eyeball and a scene of two zombies who are “necking” which actually comes across looking very 80’s splatter in all its glory.
The scenes with Nick and Happy range from Fangoria getting name checked, Happy feeding Nick a plate of maggots and a short segment in which Happy gives Nick “the finger”. The segments are quite cheesy, as I believe they are meant to be and really just add to the fun atmosphere of the film. 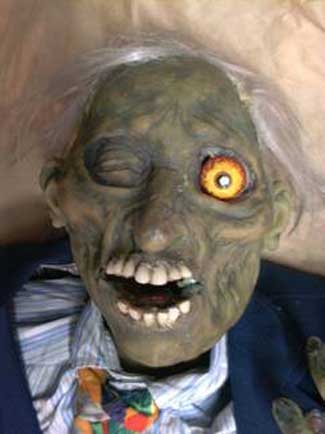 Let’s talk about the trailers though, there are over forty that are shown and of course Mad Ron sticks to his roots with genre classics such as The Last House on the Left (who can forget that tagline), The Texas Chainsaw Massacre, Deep Red and Sisters.

One of the most interesting pieces of the film though is that there are three trailers for films which led up to the slasher boom in the 1980’s the said films being Torso, Silent Night Evil Night (an alternate title for the original Black Christmas) and Carnage (yet another alternate title for Mario Bava’s A Twitch of A Death Nerve or Bay of Blood) so not only does the viewer get entertained by the trailers that are shown there is also somewhat of a history lesson hidden inside of all the blood and gore.

The H.G. Lewis trailers you know and love are here too as well as a trailer for one of my personal favorites The Mad Doctor of Blood Island. The Amicus E.C. films (Tales From the Crypt and The Vault of Horror) are also thrown into the mix.

As far as content goes there is a little something for everyone on this disk making it definitely a great DVD for a party just sit back and watch your friends faces during the trailers for Three on a Meathook, Wildcat Women in 3D (this leads to quite a humorous sequence with Nick and Happy), The Corpse Grinders or the infamous Africa Blood and Guts trailer that is pretty much guaranteed to piss of everyone in the room at one point or another.

There really isn’t a reason to go into a gore score on this one since literally blood is almost constantly on the screen. Some of the most famous scenes from that era are collected here in this film so it really is like a history lesson. During the sequences between the trailers there is sometimes some red stuff flying on the screen and it is done in a very 1980’s low budget splatter way (if this is your thing like it is mine you are sure to enjoy the sequences).
In all Mad Ron’s Prevue’s From Hell is a quintessential party DVD and it really does belong in your library if it’s not already there.