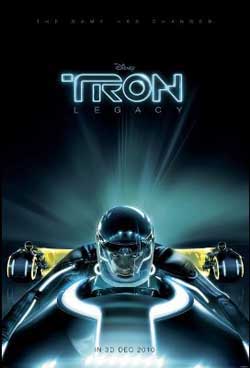 Kevin Flynn, cyber genius disappeared without a trace over 20 years ago. His son Sam Flynn has found him in the Grid. The cyber world Kevin created just prior to his disappearance. Now Sam has gone into the cyber world to find his father & stop his virtual doppelganger, Clu , from escaping the cyber world with his army of digital warriors to achieve his ultimate goal…taking over the real world. Our world.

Man oh man people, The Saint remembers way back in the day when I only had a few acolytes & I was just beginning on my quest for world domination when I saw he trailer for Disney’s “Tron”. I remember sitting in the darkened theatre & looking at visuals that NOBODY had seen before. It was only a 30 sec. teaser but I distinctly remember the audience applauding at the end of the teaser & excitedly muttering amongst themselves about how f*cking awesome “Tron” was going to be. Well, “Tron” was an amazing film, VISUALLY. There was quite literally nothing ever like it up to that point in time. The lightcycle battles, the arena where cyber warriors battled with their “Identity Discs” were astounding & when a warrior lost they got “De-rezzed”. Basically they were electronically torn to little bits & pieces of useless data, never to be seen again. The biggest problem with “Tron” was that the plot was sorta….dense. It was obvious that Disney poured a ton of money into it’s amazing visuals but didn’t think too much about a script that made all the visuals mean something. Because of this “Tron” flopped mightily.

But over the years the film has slowly grown a very dedicated fan base. People remembered it for it’s visuals & it’s acting. The actors did a fine job despite the weak script. In hindsight I believed that Disney knew that the script (By director Steven Lisberger) was a piece of crap but that the visuals would make the script immaterial to unsuspecting audiences. They were wrong. But the underground army of people who saw “Tron” grew over the years & when it was released on dvd, sales went through the roof. A sequel to “Tron” had been discussed over the years with Mr. Lisberger attached to write/direct once again but for one reason or another the film never happened. But finally 2 years ago “Tron: Legacy” went into production with stars Jeff Bridges & Bruce Boxleitner returning as well.

Late last year, my son & I were at a screening of some silliness whose title I don’t remember & we saw the teaser trailer for “Tron: Legacy” & we were giddy with excitement (well he was. The Saint doesn’t do “Giddy”. It’s unbecoming of a deity to be “Giddy”). Then we saw the release date Dec 2010. We were at the end of 2009 when we saw the teaser. And the realization that we would have to wait over a year to see the movie bummed us out. But nevertheless we knew it was coming and that was enough. In Disney “Real 3D & Imax” as well! We were ready…and the waiting began.

Here we are & now it’s December 2010 & I preordered 4 tickets at the beginning of the month for myself my son & a couple of friends. We walked into the IMAX theatre and were prepared to be wowed by what was about to be unveiled to our oh so ready eyes. Something that we had waited years for. Something that was going to be the ultimate 3D film. We were ready to let our jaws fall to the floor for the entire running time of the film & be amazed beyond all belief. Yup, that’s what we were ready to do…

You see where I’m going with this right people? “Tron: Legacy” is amazing for the one reason I thought it wouldn’t be. Yeah, yeah, the visuals are 20 times more amazing than the original. There were some things in there I’ve never seen in a movie before, that’s for sure. But I was amazed because once again Disney used about $10,000 dollars of an estimated $300,000,000 budget on the script. Which is just as head scratching as the last one was. Actually moreso because it tries to rectify stuff that the first one never really cleared up. It’ so sad….

“Tron: Legacy” opens with the son of Kevin Flynn, Sam (Played by Garrett Hedlund) breaking into his father’s headquarters on the eve of the release of their latest OS upon the world & the announcement that the stock is going public. Sam isn’t too crazy about the idea even though he is the biggest stockholder in the company & he sabotages the whole launch ceremony. It’s never really explained why he does this either although there is mention of the fact that his father would have given away the new OS, not sell it to the masses (a slight jab at Bill Gates perhaps)? Sam rides his motorcycle back home after escaping from security by jumping off of the top of his father’s building & deploying a parachute (way too late I might add). At home he finds his father’s best friend Alan Bradley (Bruce Boxleitner, who played Tron in the original & has a cameo in his Tron persona as well in the film. He tells Sam that he got a text message from his Kevin & hat the text originated from Flynn’s, the arcade his father owned & lived in from the first film. And yes, Alan still uses a pager. That’s one of the film’s few funny touches. Sam of course, doesn’t believe it & goes to the long ago shuttered arcade to investigate. While there he finds a secret office behind a “Tron” videogame & he enters the office to find a battery of computers covered in dust but still in working order. He pushes a few buttons here and there & all of a sudden finds himself “digitized” & put onto “The Grid”, where all new programs go to fight & possibly become part of Clu’s burgeoning army. Who is Clu you ask? Clu is the cyber version of Kevin Flynn who basically runs the cyberverse. He also looks as young as Kevin did 20 + years ago. He’s looking for Kevin who’s identity disc holds the key to getting off of the grid, out of the cyber world & into our world. Which he plans to take over.

The script begins to get muddy just after that info is divulged & the it’s all downhill from then on. At some point we’re introduced to Quorra (Olivia Wilde) who rescues Sam just as he’s about to be de-rezzed. She is the last of the “ISO’s”, beings that the grid created on it’s own. She’s the last of them because Clu finds them to be “Imperfect” & destroys them all, he just happened to miss her of course. And she can kick ass too..she’s sort of a combination of Hit girl from “Kick Ass” & Trinity from “The Matrix”. She’s easy on the eyes as well. She takes Sam to his father who lives “Off The Grid” where Clu can’t find him. His home reminded me of the room Keir Dullea found himself in at the end of “2001”. After a short rest, Kevin tels his son about what’s happened in the last 20 years & why he never came home. They have most of this discussion over dinner, which is a roasted pig. Delicious I’m sure but where the f*ck did it come from? You got me…I don’t know where they found a f*cking pig to kill in the cyberverse. It certainly isn’t a cyberpig. Looked tasty though.

The plot for what it is, just meanders around here and there making less and less sense. There’s a disco scene where Daft Punk are the DJ’s & I almost want to say that it’s the coolest scene in he movie. Daft Punk are responsible for the soundtrack & it is perfect for the film. They are also in their 30 sec. of screen time. They’re the only ones who actually look like they belong in the cyberverse with those cool robo-helmets they wear behind the wheels of steel. Their music fits the motif of the film perectly as well. It is a pulsating groove that runs pretty much through the whole film & makes scenes a lot more exciting than they actually are. But that’s just a shame isn’t it? If you need the soundtrack to keep you interested in what’s going on up on the screen (an IMAX screen in my case) then your movie is flawed on a fundamental level in my opinion.

But the worst part of the movie in my opinion was the fact that the much ballyhooed 3D effects were at times blurry & bad & at best average. It’s not the kind of film that throws things from the screen at you. There are a few good 3D scenes during the cyber cycle battle but that’s basically it. The 3D works in a dimensional sense. There were points in the film where we felt that we were actually on the grid ourselves, which was cool. But they were few & far between. I really ws expecting some f*cking kick ass 3d scenes in this puppy. “Tron” seems to be custom made for a 3D experience, but sadly it ain’t here. Actually “Yogi Bear” & “Tangled” had much better 3D effects in them than “Tron: Legacy” did. Yeah, I said “Yogi Bear” & “Tangled”. I saw em’ both at private screenings & you know what? They were both pretty good & much better than “Tron: Legacy”. I liked em’ both, ya wanna make something of it….? I thought so.

All of the performances in “Tron: Legacy” are good & Jeff Bridges is excellent in the dual role of Kevin/Clu but this leads me to a sad realization. Remember, Clu is a younger Kevin. Twenty years younger at least. He’s not played by Bridges in make up, his face is a digital creation & I’ll be damned if Hollywood doesn’t almost have it perfect. There is a bit of stiffness in Clu’s face, like he had too much Botox injected into his face. But besides that…the illusion is spot on. Soon, very soon, Hollywood is not going to need actors. We’ll be watching Vincent Price & Lon Chaney Jr & Boris Karloff in all their glory again & while that might sound cool…it really isn’t. But it is coming & sooner than we think.

But what about the rest of the plot you ask? It doesn’t matter, it really doesn’t matter. If you’re going to see “Tron: Legacy” you’re going for the visuals not the plot & Disney knows that. But aside from a few cool scenes, the visuals didn’t have the impact on me that I thought they would & I suspect that you’ll feel the same. It’s not a terrible movie at all. But it’s not a very good one either & we left the theater vaguely disappointed. Disappointed because “Tron: Legacy” had the chance to really shine but all it did was glow dimly for a little while just like hose little glow sticks that campers use. But just like those sticks do…the glow slowly fades away and all we’re left with is what we wanted it to be. The dream of what a great movie we thought we were going to see & the nightmare of what we actually got.

I’m giving “Tron: Legacy” 2 shrouds out of 5 for it’s visuals & Jeff Bridges performance (has he ever made a horror movie)? But oh, the movie it could’ve been….