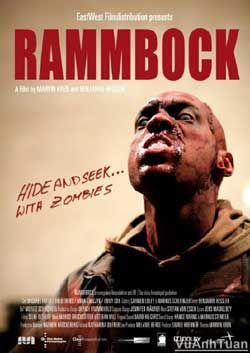 Just when Michael arrives in Berlin to visit his ex-girlfriend Gabi, a terrible virus starts spreading across the city at a rapid pace, turning people into mindless homicidal maniacs. Much to Michael’s concern, Gabi’s not home; instead, he meets Harper, a teenage plumber’s apprentice at work in her apartment block. Together, they manage to barricade themselves when raging hordes of infected people swarm the building. Surrounded by these thirsty zombies, Michael and Harper have their hands full to survive – and it will take all of their ingenuity to make their way out to try and find Gabi.

Michael is just another determined, jilted, lovelorn dude (think of him as a German Shaun) who gets the urge to travel to Berlin to return a set of keys to his ex-girlfriend, Gabi, in person. When he arrives at her apartment, he finds only the handyman and his apprentice, who informs Michael that she just stepped out a few minutes before he arrived. The apprentice, Harper, is fine, but something seems a bit off with the handyman. When he goes into full-on zed mode and attacks Michael and Harper, they suddenly know what strange things were afoot at the Circle-K.

And if that’s not bad enough, they soon find that they’re trapped in the apartment while everyone outside is getting ripped to shreds in the courtyard below by all the zombies. Mere mortals would be sh*tting rhinos by this point, but Michael is a man in love and a man on a mission – to prove to Gabi that they should be together, so he begins scavenging and MacGyvering anything and everything in the apartment in an attempt to escape the apartment, find Gabi, kill Phil and prove that dogs can’t look up (whoops, sorry…wrong flick), and get the hell out of the city before it’s too late. Once again, I woulda just gone to the Winchester…

RAMBLINGS:
I’ve gotten to a point in my life where, not even just doing this gig, but movie shopping in general, where if I see a title that even sounds like it’s a zombie flick or especially if it has “…OF THE DEAD” in the title, I want to Hulk smash the mailman or nearest video clerk. Why? Because honestly, most zombie movies of the last couple decades have been the cinematic equivalent of deep-fried sh*t on a stick. For every awesome zombie movie like REC or DEAD SNOW we get, we also get slathered with craptastically epic fails from DIARY OF THE DEAD to HORNO, and trust me – there’s no shortage of sh*t out there these days on any budget level. It’s gotten to the point where I look forward to a new zombie movie even less than I look forward to folding my own laundry, scrubbing a toilet, or accidentally running into my first wife.

BUT, I’m here to tell you now – the truth is out there, my friends, and so is hope. SIEGE OF THE DEAD (or RAMMBOCK, in its native Germany), is just the electric shock to the nuts of the zombie subgenre that it has sorely needed. I love this flick – love it to the point that I wish there was more of it. Yeah, it straddles the blade between short and feature by clocking in at just over an hour long, but it tells the story it needs to tell very well in such a short time…I just enjoyed the sh*t out of it so much that I wanted more. I love, love, love, FUCKING LOVE it when the characters and story are what stand out in any end of the world type movie and the zombies (or whatever) are just one more background-ish complication on the road to the characters achieving their goals.

One thing that really impressed me about this flick was their very liberal interpretation of the so-called “rules” zombies have had to follow in movies since Romero laid them out back in 1968 with the original NIGHT. I know how the arguments go though, and I think it’s stupid…Romero-religious fanatical fanboys throwing hissy fits back in 2004 with the sprinting zeds in the DAWN OF THE DEAD remake, and the same with 28 DAYS LATER. Really, guys? Me…I could give two sh*ts if the zombies f*cking fly, as long as there’s a good story there and I’m entertained. I won’t give anything away but for one example of the writer’s unique take on the rules – the zombie virus (a la the Rage virus in 28 WHATEVER LATER) is activated by adrenaline and excitement, so the longer you can keep your chillax on, the slower your transformation – kind of the anti-Chev Chelios scenario from the CRANK flicks. I found it fascinating, I bought into it, and I loved it.

LAST WORDS:
I wish there were a few more good American-made zombie movies these days for me to latch onto and love like I have the European flicks like REC, SHAUN OF THE DEAD, DEAD SNOW, PONTYPOOL, and yeah, even and especially DOGHOUSE. But, a good zombie movie is a good zombie movie no matter what country it comes from, and I’m always happier than being on the front row by the stage for amateur night at the Stinky Finger Lounge to see one that thrills me like this one does.

Some will throw stones and more than likely bitch and moan also about some of the plot similarities between this and SHAUN…don’t let them stop you from seeking this flick out though. There’s enough entertainment and story and excitement and plot twists (didn’t see it coming – very nicely done, guys!) to make this one more than worthy of being in your collection and enjoying over and over and over again. And you also learned something new by reading this review – if you get bit by a German zombie, raid the local pharmacies for Valium, Vicodin, Prozac, all that sh*t, and enhance your calm, John Spartan!

Tags Rammbock Seige of the Dead 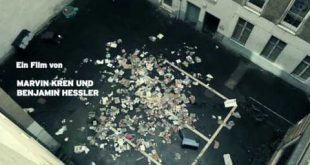