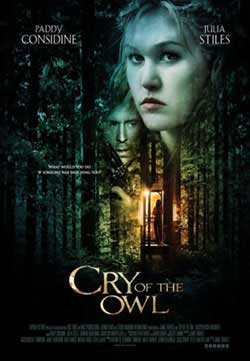 A troubled young man retreats from the big city and his ex-wife for the tranquility of a small town. He is drawn into a relationship with a young woman whose boyfriend goes missing, leaving the new arrival as a suspect.

Color me pleasantly surprised!!! I finished watching a film that I had no interest in watching, nor did the synopsis do much to peak my interests but once this thing was rolling, I was intrigued. “The Cry of the Owl”, based on the novel by “The Talented Mr. Ripley” author Patricia Highsmith and adapted for the screen by Jamie Thraves, who doubles as director, hits a homerun here with a film that is highly engaging as well as featuring some very strong acting and characters that are very real, damaged, and complex that takes the film in different directions without being a mess.

Robert Forrester (Paddy Considine) is a troubled man who leaves behind life in the big city to try and screw his head on straight while in the midst of a divorce from Nickie (the always terrific Caroline Dhavernas of the underrated series “Wonderfalls”). Shortly after arriving he finds himself obsessed with watching Jenny (Julia Stiles) as she cooks or listens to music. He has basically become a stalker, hiding behind trees or hanging out in the woods, trying not to be discovered. Jenny eventually finds Robert watching her and the two begin a strange relationship that takes a horrible turn real quick when Jenny’s ex-boyfriend Greg (James Gilbert) disappears and all fingers are pointed at Robert and a bizarre string of events leads us to a finale that will leave you wanting more.

On a technical level, the film really doesn’t offer much. There weren’t any outstanding sequences or shot with any particular style. The story has a tendency to change gears every half hour or so which may be disorienting to some and causes the film to be a bit disjointed. There is a talent at work here who has yet to refine his craft. There were mistakes made, mostly in the script, and some things may not have been clear or expressed they way they should have been. I would have liked to have seen a bit more contrast between the scenes that take place in the small town as opposed to the big city scenes, they didn’t feel right to me or I didn’t quite see the difference.

What I really did enjoy here were the performances and felt the characters were very interesting. This is the films driving force and what makes it worth viewing. Each character comes across as being “normal” but really these people are damaged.

All of them appear to be successful in their own way, whether it be at work, at home, in love, these characters could be you or I, on the surface. As the story moves along, we begin to see what they are capable of and anything could happen with or to them. The cast truly gives life to these characters and when we discover that that they aren’t who they appear to be, it gives the proceedings a bit more validity. Paddy Considine is a real interesting actor and I really found myself lost in Robert’s mind and Paddy was responsible for making him interesting. I have never been a real fan of Julia Stiles’ films but have always enjoyed her performances and this is no exception. The supporting cast does a bang up job and it’s the actors’ ability to make us believe that drives this film.

“The Cry of the Owl” doesn’t seem to be very well received by the masses and that’s fine. This isn’t a perfect film or just plain isn’t for everyone. My opinion may not account for much but these characters were really unique to me. The acting is very strong and the film held my attention the entire runtime. I’m sure that the source material has a much better flow than how this films script ended up or maybe there are scenes missing that may explain some of why the story shifts around so much but what we have is this: a very strong set of characters and solid performances to boot. This films is worth checking out.