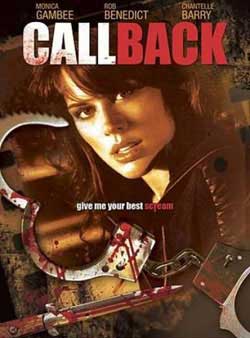 Levi is a very successful director of the low budget horror film Vice. He is currently casting for his new film and finally sees something he likes in the young Meadow, who is new to the Los Angeles area. Levi of course invites her over to his place for a private call back; you see Levi likes to do certain things to the young actresses who try out for his movies. He is in for a big surprise though, Meadow and her girlfriend are both big fans of Vice, so big that they want to show Levi all of their favorite scenes.

“See how much trouble sh*t talking gets you in?”

Ben Ross knows how to make you cringe, and somehow still manage to turn you on while he does it. Mr. Ross’s 2009 feature Call Back is a nice polished piece of modern exploitation cinema that isn’t afraid to poke fun at itself. 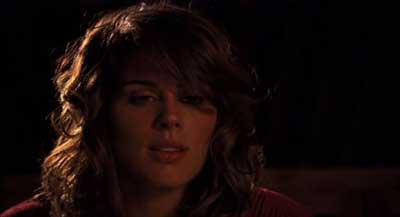 Call Back starts with a young director named Levi who is doing a casting for his new film. Levi was successful with his low budget film Vice and is now a well known name in the LA scene. He informs each of the girls who are auditioning how he made both of the stars of Vice into big stars and how he can do the same for them, all he needs to do is hear their best scream. This segment got a few laughs out of me as each girl gets the same speech from Levi and each girl is horrible at her scream that is until the beautiful Russian woman Sonja lets loose the perfect one. Levi however doesn’t like the woman claiming that she looked too “slutty” and her English wasn’t all that great.

Just when Levi has just about had it though a young woman named Meadow comes in to audition. Meadow’s scream is horrible, so horrible that Levi just continues to make her do it until her breast pops out of her blouse; embarrassed Meadow runs out of the audition only to be chased down by Levi. Levi explains to the young woman that she has talent and he wants to make her a star, all she has to do is come by his place that night so she can have her first call back. 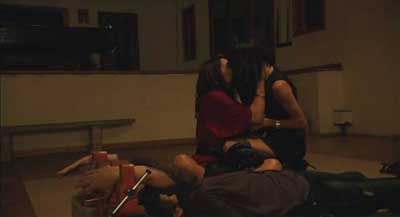 Levi of course starts to get ready for his evening, and even brings out his camera that he starts rolling as Meadow makes her way up to the house. He follows Meadow around with the camera as he shows her his spacious and nice house. In one of the rooms in the house Levi has kept all of his props from his film Vice. Among these props are of course the two main vices, a chainsaw, various needles and knives, a lead pipe and a small bottle of cyanide. Meadow seems nervous as she looks upon all of these items and listens while Levi explains to her that he prefers a realism approach to his movies, of course he wants to use real knives who cares if it almost caused an accident on the set.

It isn’t long until Levi begins to come off slimy; he begins hitting on Meadow who almost seems as if she is expecting it. Her girlfriend of course would understand she explains, because even she knows what it takes to get ahead in Hollywood. Eventually Meadow is able to get the camera away from Levi and it is her turn to ask the questions. Levi starts to become annoyed with Meadow doesn’t give his camera back, but he doesn’t get to be annoyed for very long because another woman has shown up wearing the mask from Vice and with a quick blast from the lead pipe he is soon knocked unconscious. 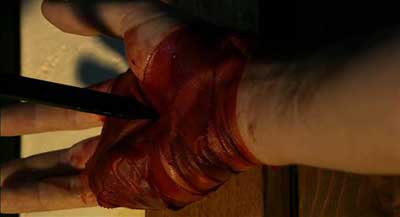 When Levi wakes up he finds himself in the same situation as the character in his film. He is laying on the floor with both of his arms caught at the wrist in the two vices. The girl wearing the mask soon takes it off revealing herself to be none other than Sonja. Sonja and Meadow are girlfriends, and apparently don’t mind just randomly starting to make out. Levi needs to get his stuff together though, you see he wrote the script to Vice so he knows exactly what is about to happen to him and Sonja and Meadow are both such big fans they are going to reenact all of their favorite scenes upon him. 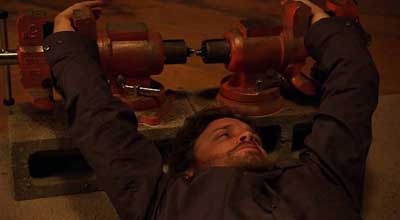 Ben Ross’s Call Back could easily get put into the torture p*rn subgenre of the horror scene; there are some pretty disturbing sequences that are set up. The film mostly uses one location (Levi’s house) but it is never limited by this. For most of the film Levi lays on the floor trapped and unable to do anything while the girls have their way with him. Among the things these girls do to the director are: slicing him with needles, using a stapler to close the open wounds, playing tic tac toe on his stomach with knives, attempting to simply tear away his finger (when that doesn’t happen they simply cut it off and grind it up in a blender to pour onto him); if you haven’t guessed the gore score is quite high with this one, most of the scenes occurring over classical music. Again Call Back could be listed as torture p*rn but I prefer to call it exploitation. For every scene that repulses you there is also a scene that kind of turns you on. Call Back is definitely cringe worthy and sexy at the same time. 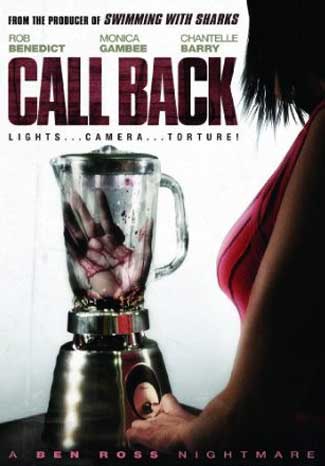 Rob Benedict does a great job bringing the sleazy director Levi to life. Throughout the film the girls find various things that Levi has done in the past and they aren’t afraid to show them to him before they get revenge for whatever he did. One of the most disturbing scenes shows the three watching a tape of a young pretty girl who like Meadow has shown up at Levi’s house.

Levi follows the girl around the house, saying much of the same things he did to Meadow. As he gets the young girl onto the bed he orders her to remove her blouse and bra, when the girl does as she is told he pulls her onto the floor on her knees and although the viewer can’t see the next part it is very audible and very obvious what Levi is doing to the girl. Meadow becomes disgusted after watching and goes into the refrigerator pulling out a large cucumber so she can see how much Levi enjoys when the tables are turned on him. Rob Benedict’s performance really makes you not feel sorry for Levi at all, especially at the end when the motivation for the two girls becomes known.

Call Back starts almost like a love note to the torture p*rn cycle that appears to be winding down here in America and then just knocks its viewer around with different sensations that by the end of the film you are wanting the girls to do the most evil things they can to young Levi.

Call Back comes with high recommendation for fans of the gore that want a little sex added into their mix, it even has a little bit of class to it as well. The film is also set itself wide open for a possible sequel in the future but we will have to see about that one. 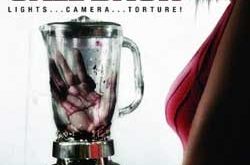