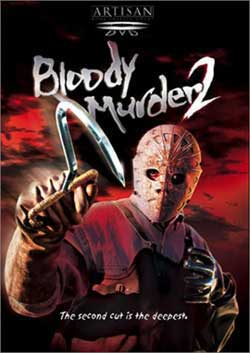 Camp Placid Pines has wrapped up another successful summer, and the counselors left behind are closing up for the winter. But life is far from bucolic. More than five years after he terrorized the teens of Placid Pines, Trevor Moorehouse — a psycho decked out in a hockey mask with a chainsaw in place of his left arm — is back, and it looks like he’s here to stay. Can anyone stop him?

Hello, gore mongers of the underground! Today’s review is Bloody Murder 2. This film is your basic stalk and slash in the woods at a camp fiesta, in the vein of such other outings of horror as Friday the Thirteenth, Sleepaway Camp or ( the original) Alone in the Dark.

This trail trotted many times takes place after the camp has already closed down for the winter season. The camp site is Camp Placid Pines and someone is out there… lurking in the woods. Some do not believe the tale of Trevor Moorehouse and for some, he was a part of their recent past at the camp. Tracy’s brother, Jason, was one of Trevor’s prior victims. Tracy is haunted by memories that she can’t escape from within these very same woods. The councilors decide to play a drunken game of Bloody Murder (the film’s spin-off version of Camp Blood, the game made popular by Camp Crystal Lake).

There is a hot shower sex scene and nudity, which fits most standards of eighties knock camp Horror. A pile of vomit adds the the plus side of this opus as we do not see enough regurgitation in cinema today, unless it’s the re-makes of timeless classics. I doubt this will ever see a shot again in a theatrically revamped Hollywood glossary. There are some pretty gruesome deaths. A leg removal. A head is bashed in and there is a darting arrow that swiftly bolts through the neck of an unsuspecting victim. To them, it may have been unsuspecting, but the seasoned viewer could see it coming as soon as it left the bow.

This is not talking down on the Special Effects provided by Todd Masters. They were quite masterfully impressive when displaying each graphic in-screen atrocity. It gave you the eighties vibe once more. I would say the best feature of this presentation would have to be the relentless gore effects.

The acting, I’m not going to say was bad… but was very overplayed when portraying youthfully aged urban classed society with a ghetto stagger in their lingo. Performance overkill at it’s worst… or finest.. Either way, it’s bad.

The direction was decent and the visuals are the more dominating pieces of the film. The kill scenes are shown with graphic (for it’s time) skill. About the two leading factors in the flick’s inevitable downfall are some of the acting and the overplayed plot and revisited scenery of the camp in the middle of a masked killer stalked forest. Sex, death and horrid performances await in the dark woods of Camp Placid Pines.

Overall, I would say this has been seen to the generally seasoned and unsurprised slasher fan over and over again. A masked or unseen killer, terrorizing a camp of either councilors or campers in a maze of dark forest. The trail has been stalked over and over again, and worn down in my opinion. If you’ve already seen the classic films of this slasher genre, you’ve laid eyes on the best there are to witness. This, nor does it’s original live up to them. I personally know someone involved with the original that is not very proud of this credit himself. I would say if anything, check it out for the special effects. Yet still as decent as they may be, the deaths are still nothing that we, the bloodthirsty, have never seen before. I think the recent rehashing of the original Friday the Thirteenth film (or franchise, whichever they decide to butcher) may spark off a whole new string of campfire terror to attempt another hack at the pitch-tented site stalking legends. Hopefully Trevor Moorehouse will remained buried forever as far as re-makes go. I’m sure another sequel will return to Camp Placid Pines before we know it. I personally can miss that bus. NO HORNS.

Until the next time, this was Jay… Keep one foot in the grave, one fist in the guts and your eyes out for gore… Later.