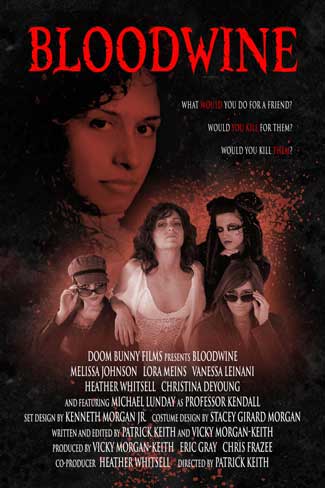 Andrea is just an ordinary Goth college girl trying to deal with the tragedies life has thrown at her. When her best friend, Brandy, comes back into her life, Andrea thinks things might finally be taking a turn for the better. But when the machinations of a mysterious woman, Carmilla, cause a birthday gift to go horribly awry, Andrea is forced to make the most difficult choice of her life, not only for herself, but for her dearest friend.

“If I were you, I’d plan on stocking up on crucifixes and holy water.”
~Mercedes

I am thrilled when I can report that a low budget movie has beaten the odds and is a good movie, not just a good idea. “Bloodwine” is a good movie that is dependent on the acting of the two leads rather than special effects or gore tricks. Lora Meins and Melissa Johnson are two names you will see again if anyone is smart enough to cast them. I hope this review does the film justice as I really enjoyed it.

“Bloodwine” storyline is this:
In a castle in modern day Romania Andrea (Melissa Johnson) who is dressed to the nines in gothware, has found the coffin of Carmilla (Vanessa Leinani) and battles the vampire to the death. The movie flashbacks to six months before and Brandy (Lora Meins) find she is rooming with a childhood friend Andrea who she hasn’t seen in years. As the two old friends catch up with each other Brandy finds that Andrea has been dealing with her boyfriend’s suicide, harassment from the two girls down the hall and professor who isn’t treating her fairly. Andrea buys some brandy for Brandy’s birthday. Carmilla has the clerk, which seems to be a Renfield sort of character suggest to Andrea a bottle of special brandy that is from Romania. Brandy finds the bottle when she returns from a school break and drinks some it before accidentally breaking the bottle. Brandy becomes violently ill and ends up passing out (or dying depending on your take of the scene) in the shower. She turns into a confused vampire that avoids Andrea and starts killing everyone that has treated for Andrea poorly. The two friends end up fighting with Brandy wanting Andrea to join her as a vampire so they can stay friends forever.

The movie has very strong performances from Lora Meins as Brandy who steals the show as a bookish friend who becomes a full on sexy vampire and Melissa Johnson as Andrea who takes a little longer to warm her character up but does well in the end. The relationship between the women is the main story and nothing else would work if we didn’t believe in them. The movie has good solid camera work, better than average sound for a low budget production and very good script. The few special effects work well enough and don’t over power the story. The music works with the story. The acting of the rest of the cast is good, other than in the prologue which Carmilla seems to be over acting major and Andrea seems to be underacting to make up for it, but this is a very minor issue. The scene seems to be a throw back to the Hammer horror movies.

The idea of alcohol being inflected to bring the vampire gene to the United States is a clever idea. Rather than worrying about the shadows of the night it makes us look more closely at what we are drinking and leaves the story open for a sequel should the filmmakers decide to revisit this story. I am not sure about idea of Brandy drinking Brandy, which is a little too cute and pulls the viewer out of the film as does the Doom Bunny logo which appears many different times during the film. The bunny is Andrea’s stuffed animal, and also appears with a horror host on TV. Doom Bunny just needed to appear once probably with the host, which was tongue in cheek anyway.

While the movie had Brandy start looking and dressing sexier as she fills the role of the vamp(ire) the seductions are rather short and to the point. She teases the professor that will not give Andrea a break on a paper but doesn’t draw the kill out. Probably the sexiest moment of the movie is when Brandy kills Nicole and slides down on the floor with her. I don’t think anything more needed to be said or shown. It was also interesting that Carmilla had her heart in a jar so she could be staked in the chest and not die. I wish there were more of a point of why or how she was able to remove her heart from her body, but did make the scene more interesting.

What I liked about the movie:
The acting from the two young leads was great and very believable.
The movie had nudity but not for titillation sake, it was more to show the Brandy’s vulnerably and was a strong scene.

Men played very minor parts in the story. This was a woman’s story all the way, which very few films are.

The digital effects were used sparingly and there for had more impact.

The camera work was well done and no sound issues and I liked the music.

I like the fact that the vampire hunts down everyone she feels have misused her friend.

Things I didn’t like about the movie:
The acting in the prologue seemed over the top. Did Carmilla have to scream her lines that much?

There was wooden paneling on the stairs in the castle. Low budget yes, but paneling??

And less Doom Bunny is more. But I want one.

The film hasn’t been released yet, but when it does I would with no reservation to say you need to buy a copy of it. Not only to support intelligent independent horror movies but because it is a good movie. The lead actresses are very talented and bring naturalness to the story. They seem like they have really been good friends all their lives. You end up caring about the characters, which is something that is often forgotten in paint by numbers big budget movies. I am sure we will be seeing more from Doom Bunny Films and I for one will be looking forward to whatever they decide to film next. This is a movie I would be happy to stay up all night watching. Come over I will have the popcorn waiting. I give it 4 and half stars. If you want to be updated on the film, you can check out www.bloodwinemovie.com