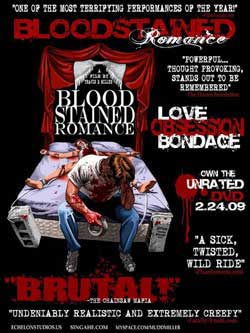 Holdens a young college student who has never believed in love at first sight …until he sees Sadie, a sweet young coed who is everything he’s ever wanted. But when Holden’s anti-social behavior gets in the way of his attempts to talk to her, his life starts to unravel. Holden believes he loves her and doesn’t want to let that love go. He would do anything to keep it and as the thin line between love and obsession begins to smudge and fade, so does his reasoning for right and wrong. Soon lies turn to murder launching Holden into a spiraling bloodbath of violence and desperation as he tries to hide the infatuation that feeds his madness. Through it all, he tries to cling to a trembling grip on reality, as love and pain coalesce into a shocking “climax”

Hell-o, blood hounds and gore whores. This review is for the literal splatter fest known as Blood Stained Romance. I was lucky enough to receive a copy directly from the Writer, Director, Producer and Cinematographer himself, Travis B. Miller. Before I go into this review I must say, just as I told him… When I first opened the package and saw the cover art of this film, I knew I was in for a treat. The cover art is from a scene of the film, but drawn in animation and it is quite awesome. One of the most brutal covers I’ve seen for a film. There is no mistake what you’re getting yourself into, before you even open the box. You know what they say, never judge a book (or DVD) by its cover, but the film lived up to the graphic graphics on the shell case.

Holden, a student in college for television news Production, is quite shy and introverted. He has a few friends and spends most of his time at the library studying. His teacher has recommended him for internship at the local television station and he does not want to blow his ride. He is not so much the ladies man and has a hard time trying to talk to or approach them as normal folks do. Then he sees a young, attractive girl through the books at the library, named Sadie. His anti- Social behavior gets the best of him and he buckles up as he tries to speak to her. All he can do is fantasize, and he does. He asks his friend and co-worker about her and finds out where she works out on a daily basis. He bumps into her on purpose at the library. She notices a book on p*rn that falls onto the floor. He quickly says it’s for a book report as he is wearing a shirt that says XXX over a skimpy dressed woman. He has an obsession with VR (Virtual Reality) Bondage p*rn and these images stay on his mind quite often. Sadie brushes him off (and talks to her friends about him in a not so polite way), until they meet again at the gym.

Holden becomes obsessed with Sadie and everything spirals down hill and out of control from there. He starts to have visions of the two intimately together. His fantasies shift from wholesome love to violent, obsessive and possessive hatred in the blink of an eye. His fellow production assistant makes a comment about her that does not settle right with Holden. He is the first to bite the dust. Her friends follow, until the grand finale assault of depravity that awaits Sadie, her remaining friend, her boyfriend… and the viewer.

This film, for its budget, is the best I’ve seen in recent years. The special effects are not too costly, but extreme in the most violent way. Blood is splattered throughout, from beginning… until the shocking end. Bullet wounds, drill torture, merciless hackings and dismemberment decorate this visual slaughterfest of a film.

The score for the film ranges from love type ballads that express Holden’s feelings… to a decent horror score provided by Cole Campbell and Brian McDugle. For the most part, the acting is awesome. Cameron Wright does a swell job as the scream queen of the film and is pleasing on the eyes. Chris Burchette does a bloody brilliant job as a psychopath struggling with his own inner demons. He is one actor to look for in the future. Holden, while mild mannered at some times, makes Patrick Bateman look like someone you would run to for help if you looked at him the wrong way. This film is proof that you don’t need to have a big budget or huge actors to make something work. In my opinion, Bloodstained Romance eats American psycho for lunch and regurgitates the bloody chunks. This film is a brutal psychological mind f*ck of a hemorrhaging good time. A visual disturbance that absolutely deserves to be seen. This film needs to be added to the collection of any fan of underground extreme Horror.

Travis’ next feature, Bad Girls burn in Hell, will feature Horrornews.net‘s own Dai Green as a co-star. Watch for it and anything he releases in the future. If Mr. Miller can impress this much with his debut, I can’t wait to see what he scrawls across the screen next. This is a refreshing mallet to the face of Hollywood trash that has spewed forth these days. Over all, I give this film, Blood Stained Romance, FOUR BLOOD SOAKED HORNS UP.

Until the next time, this was Jay… Keep one foot in the grave, one fist in the guts and your eyes out for gore… Later.

For a complete list of movies I’ve reviewed and upcoming book releases, check out my page at www.myspace.com/headlinesnovel. Look for the Horror Anthology Moral Horror, coming to a bookstore near you on October 1st. Available now for pre-order at Amazon, Betterworldbooks Barnes&Noble, Books-a-Million, Borders, Powells and Target.com