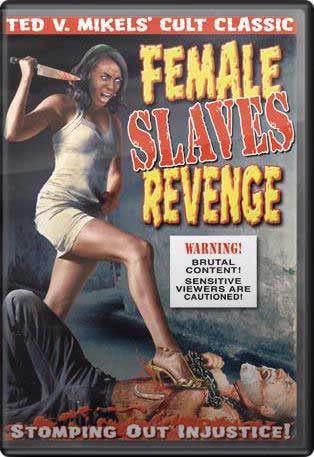 In a small section of Africa a new order has taken over and is starting to eliminate the slave trade. The new order is running out all of the rich and greedy white slave owners and giving all of the property owned by these people back to their proper owners…the former slaves. This is a fictionalized account of what happened to one of these slave owners once the new order began to take over.

“Good luck! You’re going to need it when they take over!”

Ted V. Mikels’s Female Slaves Revenge is a low budget exploitation film set in a small part of Africa during the fall of the Apartheid. The film starts with a credit sequence that essentially gives the viewer a brief history lesson about the slave trade and the owners who are being forced out of the country by the new order. Those land owners that decide to stay must face a fate given to them by the people they once kept as slaves. Pretty much the whole film is summed up in this credit sequence, literally the credits explain everything you are about to see, so really by the time the stock footage of explosions and African wildlife stop the viewer already knows what is going to happen and frankly it isn’t all that exciting.

The film starts by showing a greedy land owner (played by Ted V. Mikels) arguing with his wife who is leaving the country upon learning that the new order is basically eradicating their life style. The woman packs what she can and then immediately gets into a taxi cab leaving her husband. This doesn’t bother the land owner who continues to order run away slaves to be beaten and continues his cruel behavior to all of the other slaves that are still under his control.

It is only a matter of time before a soldier from the new order arrives at the plantation and puts Watessa, the head slave, in charge of the house and all of its belongings. The female slaves upon learning their freedom instantly begin to rummage through the wives’ belongings….mainly her high heel shoes (the reason why is shown several times throughout the running time of the film). The land owner is soon knocked out by a swift strike with one of these heels and when he awakens he finds that he is surrounded by several of his slaves and Watessa who has decided to put the land owner on trial for his crimes…..what follows is one of the most drawn out films one could ever watch.

Female Slaves Revenge starts off with a great idea for an exploitation film however it suffers terribly because of its low budget. The cast isn’t all that great, with the exception of a very angry performance by Rachel Powell who plays Butra the prosecutor (seriously this is one angry woman). The film also mainly takes place in one location which looks like a living room; I suppose the stock footage earlier was supposed to keep the viewers mind in place that the film is set in Africa.

For a majority of the film the landowner is simply kept in chains and barbed wire at the feet of Watessa as each of the nine jurors step up and state what crimes the landowner has committed. The landowner’s crimes are explained by each of the angry women and are not limited to just cruelty and molestation, he also caused the deaths of thirty seven villagers, this kind of thing really did happen and this is the true horror of the world that we live in. The film is obviously trying to use the “what you don’t see is way worse than what you see” approach because all the viewer gets to see in terms of violence are some wires wrapped around the landowner’s ankles and several scenes of high heels digging into his soft skin.

Ted V. Mikels seems to have his heart and mind in the right place about making an exploitation film, yet the whole thing just seems to fall flat between the horrid acting and the even worse voiceovers. The red stuff is only lightly sprinkled near the end of the film, although the climax of the film featuring the landowner’s sentence can be kind of hard to watch, but by the time all of that happens the viewer might tend to be asleep.

Ted V. Mikels is fairly well known in the low budget exploitation circuit and if you dig his material you are probably going to like Female Slaves Revenge…however casual genre fans might want to just go ahead and pass it up.