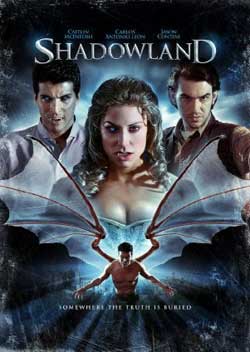 Why is it that stupid people working near churches feel the need to just rip things out of the ground, don’t they know things were put there for a reason! Some blundering workers at a site near a church realize this when they suddenly rip a stake out of a cross that is found buried on the churches grounds. Now I might not be the smartest of men, however removing a stake from a cross can only mean one thing to my horror loving self.

Wow vampires are just popping up everywhere these days aren’t they? Wyatt Weed’s Shadowland is another one of those independent blood sucking films that are starting to crowd the shelves at your local video store, there is one difference however and that is that Shadowland is actually pretty damn good!

Shadowland starts off by showing a good old fashion vampire staking which may take many a viewer back to the glory days of blood sucking cinema. It is during this opening sequence that the viewer will also notice a heavy use of CGI effects; this however adds some atmosphere to the film instead of taking it away and is an example for all of those independent film makers who want to use CGI of what to do with the technology.

Shadowland basically focuses on a few characters there is Julian who is a vampire hunter, Lazarus who is a vampire and Laura who is also a vampire (she’s the one who was staked at the beginning of the film!). Julian is basically going around the world destroying vampires and Lazarus is a rival of his. When we first see the two of them it is in an alley way where a goth kid is attempting to sell Lazarus a tooth that has been in his family for quite some time (it’s a movie folks let the ridiculousness of it go). Lazarus takes the tooth and of course kills the goth kid and is gone before Julian can get to him. Eventually Julian does get to Lazarus and the viewer is treated to one of the many great fight sequences in Shadowland. Lazarus does make several more appearances throughout the film in various flashbacks however so his fans wont be disappointed.

Once Lazarus is destroyed Julian learns of a new problem and that is the resurrection of Laura because of some blundering workers near a church worksite. After some workers remove a stake from a cross that they find buried on the churches grounds Laura is once again revived, and in an awesomely filmed sequence she crawls out of her grave and once again enters the world which has changed drastically during the time which she was buried.

Laura stumbles around town running into all kinds of people from a worker at a local diner (a really great performance during this sequence) to a homeless man who has his own laptop! Laura also has a few run ins with local law enforcement (mainly due to the homeless guy). It is only a matter of time before Julian learns about her and soon starts to seek her out in a wonderful climax that leaves room for a possible sequel! 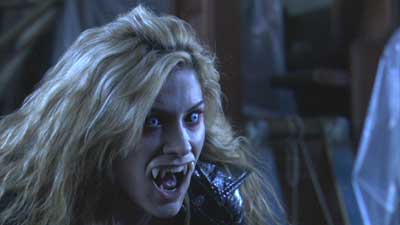 What makes Shadowland a great film in my opinion is its old school mentality, although set in modern times. The film makes excellent use of flashbacks to flesh out and develop the characters. The acting in the film is pretty good for the budget and the effects and fight sequences are very top notch for an independent offering. This is a vampire film for those who love vampires!

Wyatt Veed also takes some chances with his vampire mythology for instance Laura can digest normal food, when the vampire first awakens she walks around town constantly eating. Laura also can walk around during the daytime hours, although not in direct sunlight. How the woman became a vampire is fleshed out as a love story, Laura fell for a dark stranger who wanted to give her a little more than just some good loving which can totally be related to by the viewers of the modern “romantic” vampire films. 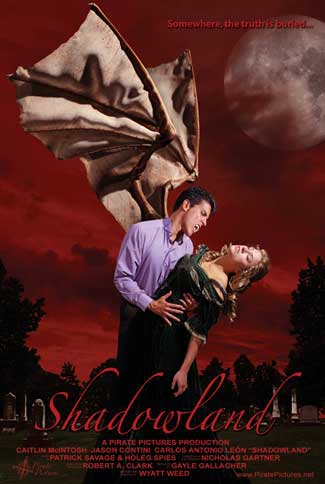 Shadowland is a wonderful trip for those who are willing to take it and the fans of the s vein licker are going to love this one, I am personally hoping that Wyatt Weed’s open ending to the film is possibly setting up a new franchise for blood sucking cinema…..see this one!