When a young woman is brutally killed by an intruder, her husband and estranged father conspire to bring her back from the dead with the help of a mysterious desert dweller. Soon after she awakens, she begins to realize that something is horribly wrong…

How are all of my acolytes all round’ the globe today? I hope you are all suffering & offering penance to your liege, The Black Saint! I haven’t been around for a bit because of some business matters & some physical ones as well. You see, when you don’t offer your nightly prayers to me as you should, I grow weak. And over the last few weeks I’ve been very weak! All of this culminated today with the mother of all ear infections..not a normal occurrence for someone of my age my doctor assured me.

I can only assume that some of my less faithful acolytes have not been keeping up with their nightly prayers to me. For this they shall pay a pernicious penance I assure you. And even though my physical plight has been treacherous as of late, I am slowly recovering. Very slowly. Soon I will be back to my old evil self & I will hunt down those who have not been keeping up with their prayers. I warned all of you in the past not to let an evening go by without praying to me, but you did didn’t you? You will suffer mightily when the time comes…I promise. And just so you know, my business matters worked out very well & financially I’m quite comfortable. Not that my overhead is very high, it’s not too hard to maintain my mausoleum. I like it dank & dusty so I save oodles of cash on cleaning supplies…

But enough about me! I’m here to let all of you know about a very interesting movie that I saw at the NYC Horror Film Festival last month called “Kiss The Abyss”. I enjoyed it a great deal & it’s director Ken Winkler & producer Eric Rucker are two of the better guys I’ve met in this business, plus they know how to drink like men! Ya gotta respect good drinking men who just happen to make good movies as well!

“Kiss The Abyss” is a variation on the often told tale of “The Monkey’s Paw”. You know the story..a couple come into possession of a Monkey’s Paw that comes with three wishes attached to it. The couple make their wishes but sometimes you gotta be careful of what you ask for. I suppose the best known cinematic version of this story was told in 1972’s Amicus production of “Tales From The Crypt” except that it was called “Wish You Were Here” in that film. But in essence the ideas are the same. 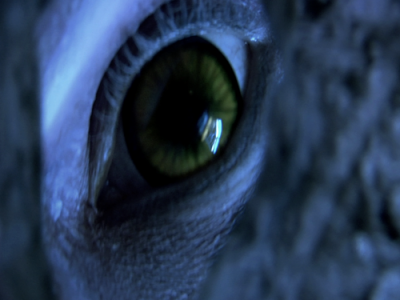 “Kiss The Abyss” tells the story of Lesley & Mark, a young couple madly in love with each other. They live together in a small home. Lesley is an artist & Mark is a mechanic. They live next door to an abusive couple who are constantly fighting with each other. One afternoon, their neighbors get into an altercation on their lawn & Mark intervenes, physically pulling the man off of the woman. But of course, the woman attacks Mark & pulls him off of her abuser. Mark stares at them in disbelief as they embrace each other & proclaim their love for each other. A few days later, the abuser comes to Mark & Lesley home with a baseball bat to use on Mark as retribution for their earlier altercation & accidentally cracks Lesley on the head with it killing her immediately. He promptly gets in his car & drives away. Mark knows no recourse but to get in touch with Lesley’s dad who apparently is a man of some means & he has a plan….

This is where the film gets interesting. Lesley’s dad knows of a man by the name of Gus who lives in the desert & knows how to “Bring people back” so to speak. Gus is played by Douglas Bennett in a performance that is so captivating that he commands the screen in all of his scenes. He’s sort of a demented cross between a young Harvey Keitel & George W. Bush! I’ll get back to him later though. Once Mark, Lesley’s dad & her brother show up at Gus’ desert home Gus gives Lesley the once over & proclaims that he can bring her back but with one caveat..once the job is done they are not to come back to him. At all. Why do you think that is so important, huh? 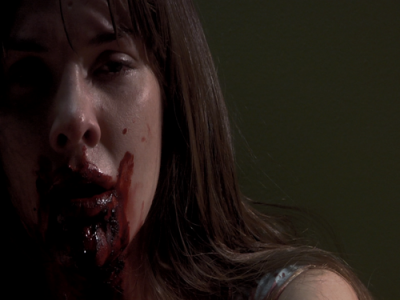 Well, Obviously Lesley comes back to life & all is well for a while but slowly & surely she starts to change. Into what I can’t say, partly because I don’t want to ruin the film for you & partly because the filmmakers really don’t tell you what she has come back as. Suffice it to say that she ain’t the Lesley they knew before she died. One of the more interesting points of the film is that we don’t know what Lesley has become or how Gus brought her back..at least not completely.

You see Gus has “something” chained up in his home. Something that is most assuredly not human but we’re never told what it is. All we can ascertain is that it’s female & doesn’t like to be chained up. It is with the help of this “something” that Gus brings Lesley back to the land of the living. But like the tale of “The Monkey’s Paw”, you should be careful of what you ask for because you just might get it.

The film is shot with a lot of flashbacks to show what the couple’s life was like before Lesley died & after her resurrection. It goes back & forth in this manner for awhile but it’s never confusing. In fact it fleshes out the characters that much more. We learn more about the love that Mark & Lesley share for each other & the disdain her father has for Mark during these scenes. They help in making the audience care for the couple & we can also sympathize with her father because although his plans go all awry, it’s only out of the love he has for his daughter that he even attempts the resurrection process. 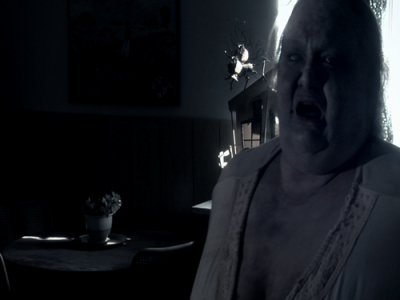 The film starts slowly for sure because of all the back & forth but if you stick with it you should be pleasantly surprised by where the story takes you. It takes it’s time in showing us the relationships between all involved before the sh*t hits the fan. And when I say the sh*t hits the fan…it hits it hard & nasty! The “something” that Gus has chained up is bizarre but strangely sexy as well. And I don’t think I’m ruining anything by saying that eventually it does get loose..& it isn’t too happy with Gus. There isn’t a lot of blood during the first half of the movie because of the time the filmmakers take in letting us learn about the characters but when the red stuff starts to flow they don’t skimp on it either. The film gets pretty sticky with the red stuff in it’s second half.

All of the performances in the film are well moderated & believable but as I said earlier, special mention must be made of Douglas Bennett & his performance as Gus. Mr. Bennett seems to be on a different plane from the other actors in the film. He quite literally steals every scene that he’s in & he’s funny as hell doing it as well. I’m almost positive he was ad-libbing most of his lines because they flow from his mouth so surely,  so convincingly that I don’t think they were scripted. His physical performance is a marvel as well. The way he walks, the twang in his voice, the overall c**kiness of his character is not something that could be scripted I believe. Fuck, he might have been playing himself for all I know but his performance really makes the movie.

The look of the film is dark & gritty as well & this helps to sell the story, especially in the desert scenes where even though they take place under a bright sun, they seemed washed out a bit. It all adds to the atmosphere of the film. I should mention all of the main actors as well, I should have mentioned them earlier but Bennett’s scenes are so electric it’s hard not to focus on him. Mark is played by Scott W. Wilson & although he does a good job in the role, his acting seemed the weakest to me. There wasn’t a lot of expression going on with his face, especially during some of the more electric scenes in the film. But he does an adequate job in conveying his love for Lesley who is played by the lovely Nicole Moore. She is outstanding throughout the film & really conveys he physical & emotional pain she’s undergoing throughout the film. James Mathers as Lesley’s dad Harold & Scott Mitchell Nelson as her brother Stephen are also both very well portrayed as two misguided family members who only want their daughter/sister back and who will do anything to achieve that goal.

“Kiss The Abyss” knows what it wants to achieve & director Ken Winkler shows a steady & firm grasp on that. As I said the film starts slowly but that’s for a reason & with all of the back & forth in the first half of the movie a lesser director might have left an audience confused. That isn’t the case here & I can’t wait to see his next effort. The film won the “Best Feature” award at the Orlando Freak Show Horror Festival along with “Best Dramatic Horror Feature” at the Atlanta Horror Film Festival. It also won the “Best Special Effects Makeup” award at the NYC  Horror Film Festival, so you can see I’m not talking about any ordinary horror film. It’s an intelligent, well acted, well directed & well staged film that more people should know about. I hope this review helps it to achieve that goal. You might think you’ve seen it before but believe me..you haven’t. At least not like this. Four shrouds from The Black Saint for “Kiss The Abyss”. A very entertaining movie indeed.