Films exploring the dark side of the medical profession are nothing new, but leave it to the Soska Sisters, creators of DEAD HOOKER IN A TRUNK, to find a way to twist the scalpel in different direction. Written and directed by Jen Soska and Sylvia Soska and produced by CJ Wallis, AMERICAN MARY follows the life and times of one disenchanted medical student named Mary as she descends into a seedy life of poverty and malpractice. Obsessed with perfection and drawn by the promise of a hefty paycheck, Mary embarks into the world of basement butchery as she performs one atrocious surgery after another on her twisted group of clients. 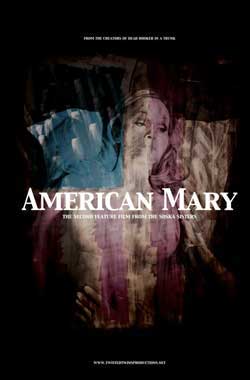 Official Synopsis:
“From the creative team that brought you the indie-smash film Dead Hooker In A Trunk, American Mary is the story of a medical student named Mary who is growing increasingly broke and disenchanted with medical school and the established doctors she once idolized.

The allure of easy money sends a desperate Mary through the messy world of underground surgeries which leaves more marks on her than the so-called freakish cliental.”