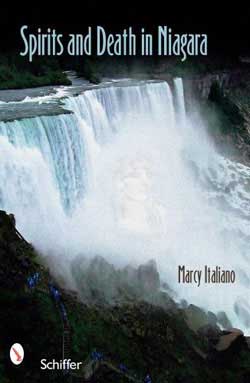 Spirits and Death in Niagara
By Marcy Italiano
Published by Schiffer Publishing Ltd.

Niagara Falls and its surrounding area are full of history, dead and tales of ghostly encounters. Knowing the area well before reading “Spirits” I have been well aware of the history but am always interested in what new gems come up or how old stories are remembered. Not that long ago Ghost Hunters from the SCI FI Channel investigated the Buffalo Central Terminal and Marjim Manor. Niagara/Buffalo is a hot spot for hauntings and legends; there is no doubt.

“Spirits and Death in Niagara” starts with a general overview of ghosts, breaking them down into three different experiences:

A spirit that is trying to understand what is happening to them and probably doesn’t know they are deceased
Events replaying over and over again like a tape recording.
Projections of living people
And Poltergeists are also mentioned (spirits that make noises and can throw things).

The first part of the book is called Spirits and we read about some locations in Niagara (both on the American and Canadian) and the stories behind them and some of the author’s experience with the site. The stories are normally just a taste of the history, just enough to make you interested in learning more or visiting the site to see things for yourself. There are many stories dealing with the time of the War of 1812, which is a particularly melancholy period as neighbors were turned against neighbors and the battles were very bloody. If there was a time which ghosts would have been trapped here due to the violence, the War of 1812 was the time. The author’s additions to the stories often speak of a longing for things to have happened versus anything happening at the time. She rarely runs into anything ghostly at all.

The section on Fort George is more detailed and is the high point of Part one. There are more adventures which take place at the fort and introduces the reader to Kyle Upton who has been running ghost tours for more than a decade and is an author of Niagara Ghost Tales as well. He has been involved in more than a few sightings of ghosts in the Niagara area. During this section of the book I was tempted to cut out the middleman and go straight to one of his books for more information.

Much more satisfying is part two of the book, which is called Death. Death is pure history and details many of the sad events that have happened in the Niagara area. Suicides and the mysterious lure of the water near Niagara Falls are explored. The author gives you the feeling that some may have had looking into the fast moving river and hearing it call to them. Many have given into the siren calls of the Niagara either intentionally or accidentally. Among the tales of accidental deaths we get some stories of the less successful daredevils include the Kayak and Jet Ski attempts over the Falls. Here the book ends at a mere 222 pages. A book on Niagara could be over thousand pages and never even dent the surface of what this location is about. The feel of history peaceful and ugly is in every street and every corner.

The author is most successful when she is writing about historic facts and giving the reader images of the powerful pull of the Mighty Niagara. We feel sadness for each death in her words. Niagara is a poem as well as a place or series of events. “Spirits and Death in Niagara” serves nicely as an introduction to the area and will make the reader want to learn more and perhaps one-day visit to stare at the swirling dark water and the fine history buildings. You can search for ghosts here or for at least a good meal, but you will know that the trip will be worth remembering.