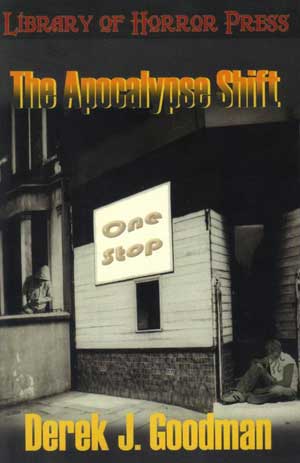 It is exceedingly difficult to blend horror and humor together in a way that appeases fans of both. The genres themselves are starkly different, catering to two completely separate tastes that often don’t mix well together at all. Successfully combining them takes a bit of skill, as well as the ability to know which lines to cross and which to leave alone. Emphasizing the horror aspect of a story often leaves the humor feeling flat and inappropriate; Emphasizing the humor tends to make the horrific bits feel like they’ve been thrown in for cheap laughs or easy plot twists.

Derek J. Goodman’s The Apocalypse Shift is perhaps one of the funniest and best humor-horror titles to appear in years.

Caleb works the night shift at a convenience store called the OneStop with his buddy Phil. The shop is situated smack dab in the middle of a rundown urban neighborhood known to the locals as The Hill. What seems like an ordinary, boring job is anything but as Caleb and Phil take on the nocturnal denizens of the neighborhood, ranging from vampires to Elder Gods to Werebunnies.

Life on The Hill during the day is typical fare. There’s the expected drugs, homeless people and urban blight known to most neighborhoods that have seen better days, and the people who live and work there are wary of everyone but themselves. However, come nighttime, once the OneStop daylight shifters leave and the bars open up, the weirdos come out in full force. Mad scientist bikers show up for drinks at a dive run by a witch, a roving gang of werewolves hangs out in the local park and one lovelorn zombie girl loiters around the OneStop showering her living boyfriend with affection that repulses witnesses.

Caleb is no stranger to trouble on The Hill. He’s been involved in fights many times, taking trophies of his battles back to his apartment. What he has kept in his bathroom, however, threatens to destroy both The Hill and its denizens when a break-in occurs and the mementos are stolen. It is now up to Caleb, Phil and Gloria, who once worked at the OneStop part time and now makes her money stripping, to track down the dangerous artifacts and keep them from being used. First, though, they’ll have to figure out who stole them to begin with, which isn’t an easy task when half the neighborhood partakes in otherworldly pastimes. On top of this, Caleb needs to find a way to ask Gloria on a date without making an idiot of himself, which will be as difficult for him as reclaiming his stolen loot.

The Apocalypse Shift is full of excellent characterization and detail, from the main cast down to the tiniest cameo. There are literally dozens of different characters, all with their own manner of speech and back story, making for an easy and yet fascinating read. Readers above a certain age will catch a number of nostalgic in-jokes, from the compulsive vampire who must take inventory of the OneStop’s merchandise to the zombie dancers filming a music video in the park. A Rubik’s Cube also makes its way into the narrative in an amazingly inventive way its creator more than likely never imagined.

While the novel is slightly heavier on the humor, Goodman manages to toss horror fans several bones throughout the story. Sly references to well-known horror characters and stories lurk just below the surface, and at times the plot is downright creepy. Fans of the zombie genre will love what he has done with the shambling dead. What in another writer’s hands may come off as sappy, gross or just plain stupid shines as he gives it just enough time in the story to work.

The Apocalypse Shift is a must-read for anyone who enjoys a truly creepy concept with giggles thrown in for good measure. It is downright hilarious, and at times can be incredibly thorough with delivering the chills.

With such a rich and expansive setting to pull from, Goodman’s novel does not cover the entirety of The Hill. Short stories involving the characters from The Apocalypse Shift, and new ones as well, can be found at apocalypseshifttales.wordpress.com. A collection of shorts (including some unreleased, never-before-seen stories) will be published under the title All Hell’s A-Buying Froztees later on this year.