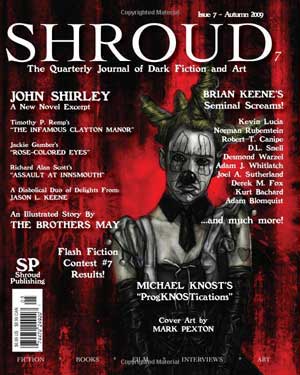 Before we get into the review proper, I owe you a bit of a warning: This issue contains a story from yours truly as well as one written by a dear friend of mine, Laura Langford. Of course, it goes without saying that both of these works stand among the greatest pieces of short fiction ever written, but you can see where some may consider my position to be open to unreasonable bias. So, in the interest of fairness, I will not review or even mention either of those works beyond this point and will review this issue based on the strength of everything else within its voluminous pages.

Did I say voluminous? Holy mother of all vaginas great and tall, is this bastard big. 150 pages. Perfect bound. Full sized. I’ve read paperback anthologies with less bulk to them. In bag/buck terms, this puppy is a truckload of C-4 picked up at a swap meet from somebody that thought they were selling clay.

What about quality? After all, you could by bullsh*t for a penny a pound, but you’d still be left with a giant pile of bullsh*t.

First off, take a look at that cover art by Mark Pexton. A post-rivet, Goth harlequin against red velvet that seems to be a tad pissed off at me. The image presents just the right balance of frivolity and menace for what lies in wait once the covers are pealed back.

Inside, there are the usual elephants whose work is precisely as expected. Brian Keene’s introduction/teaser for the “Seminal Screams” articles has me practically giddy with promise. Michael Knost gives another insightful heads up on someone we should all be following already: Maurice Broaddus. Speaking of the sinister minister, “Closer Than They Appear” is far and away the best tale in the issue, a painful story of self-doubt, self-hatred and self-destruction that rocked my ass in three pages flat. But you could have and should have been able to figure that out without me to tell you.

The fun part, the reason I bother to read these magazines instead of buying another book by someone I already know will be great, are the little surprises. Like Jason Keene’s “A Picture’s Worth”, one of those nice, methodical, slow-burn stories that tore my heart out at the end. I’ve read other stuff by D.L. Snell before, but “The Father and the Skull” struck me more than any of those. A simple, to the point and chilling fable of love and desperation in the face of evil that could also be looked at as a political allegory… damn fine. Jackie Gambler, I’m a bit angry at you. As someone with severe eye-violation issues, “Rose Colored Eyes” was probably the last thing I should have read. Nasty and mean and now there is no way I will EVER wear contacts. I knew they were evil.

I always enjoy the Flash Fiction contests because I like to see the different ways people approach a single prompt or idea (this one based around the theft of a Humpty Dumpty Costume). On this outing, we get serial killers, gangsters, “fuzzy” roll-playing, drug trips and “A Friend in Dee-d” by Mary Daley. In my opinion, that should have won the contest, even though it isn’t horror in the strictest sense. This is one of those approaches that seems incredibly obvious, but only after someone else has thought of it. Pure, gleeful genius.

Just when you think I am unequivocally endorsing everything here so that you will run out and buy it to read those two stories I said I would never mention, we stumble into the moderate flops. “Rabbit”, and illustrated story by the Brothers May, isn’t bad so much as instantly forgettable, fairly bland and possessed of a cheesy ending dependant upon an overused twist. I can’t find it in my heart to be quite as nice to Richard Alan Scott’s “Assault at Innsmouth”. To begin with, it rips off Lovecraft in the cheapest and least interesting way (using a famous place/creature type) without tapping into any of the themes or atmosphere that made the original work so great. Worse, it is basically a torture-p*rn short based in sexualized violence, which wouldn’t be such a bad thing if not for the scenes in which he has rape victims enjoying the experience. I’m never one to knock the value of shock, but crossing that line actually takes the shock out of the scene and turns the whole into juvenile fantasy.

Regardless of current extenuating circumstances, Shroud has proven themselves to be a quality magazine and this issue is no different. Just get yourself a subscription and gloat about it once everyone knows the name. 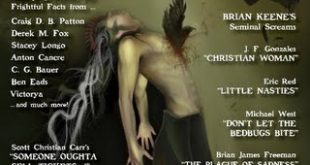