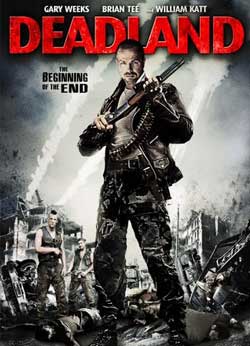 A man must cross post-world war III terrain and the new martial-law to save his missing wife.

Written by Gary Weeks, Deadland is a post-apocalyptic thriller as one man goes in search of his estranged wife. She needed a break after he lost all of their money in a bad investment, but wouldn’t you know that World War III breaks out after she goes, leaving all of America in ruins. It is against this backdrop of ruin and desolation that he must find her.

Gary plays Sean Kalos, and at the beginning of the movie we see him in at a small town gas station trying to reach his wife by cell phone. He loses the connection and goes inside to see if he can use the phone there. But he sees on the t.v. that the missiles are a flyin. This is probably one of the best sequences of the movie as he and the gas station attendant make their way outside and stare up at the sky as the missiles plummet to the ground. From their vantage point far away they witness the destruction and it plays out with a somber and haunting mood.

Cut to five years later and Sean is by himself wandering and scavenging the land. Suddenly a man darts by with two military men in hot pursuit. They catch him and demand to know where the bag is. Sean overhears and quickly locates the man’s bag. It contains a note that, lo and behold, has the name of his wife on it. It’s his first real clue and gives him new hope that she still might be alive. Unfortunately the men shoot the guy and start to chase Sean once they discover him nearby.

He manages to escape by falling into a pit where a slightly unhinged man named Jax (played by Brian Tee) is hiding. He agrees to help Sean look for his wife, with the promise of a cash payout of course. So off the two go, always looking behind them for signs of trouble, which is never far behind. They stumble upon a small cottage in the woods, home of Zoona, a woman forced into prostitution by the local military. She tells Sean that his wife might be in one of the prostitution camps but that is about all of the information she can give as a few military men arrive. Sean and Jax barely escape, but armed with this new information Sean is more determined than ever. From here on out it becomes a constant game of cat and mouse as Sean inches closer and closer to his goal.

Deadland is a well-acted thriller and all around good movie although it does feel about fifteen minutes too long. The aftermath of nuclear devastation is vividly portrayed as the destruction and despair is seen all around in the landscape and the various people they encounter. The film is shot in mostly grays and other drab colors and this alone gives the film a gritty feel.

In movies like this society has broken down and exposition is needed to tell everyone just how everything is being run now. Gary Weeks does a good job not only creating this “new world,” but in burying the exposition so it comes out in pieces here and there. And it’s not overly complicated to boot, which is nice.

The plot offers some good twists despite the usual clichés one expects in these movies. The relationship between Sean and his wife is told in flashbacks, which work well here. Not only are there some powerful moments in them, but the normal color palate they are shot in provides some welcome relief from all of the depressing gray.

I would say see this movie if you can catch it on rental. It’s gritty in the fact that there isn’t one real ounce of humor in it. One of those movies that makes you think you’d probably be better off getting killed by the bombs than having to live with the aftermath.