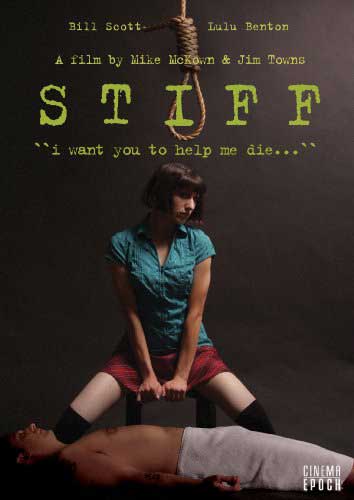 SYNOPSIS:
Troy wants to die. Lorri has an irresistible need to sleep with a dead man. It’s a perfect match, until Troy begins to fall in love with Lorri.
REVIEW:
Every once in awhile a film comes my way that I don’t feel like watching. After viewing the trailer for “Stiff”, I really had no interest. So I sat down to watch it and damn, this is a solid little indy. I get the feeling that this film was shot on the cheap (VERY cheap), though you shouldn’t let that detract you from checking out a very interesting film. There are many issues that I will discuss later that I had, though minor, keep it from excelling. The film does have a strong story, though some of the dialogue sounded a bit silly but that could be in the delivery as well. All in all it’s a unique film and not by the numbers which is a good thing.

Troy (Bill Scott) is through with life. He is tired of living and wants to end it all. For one reason or another he just has not got around to it yet. Instead, he calls a crisis hotline and talks to Lorri (Lulu Benton) who always seems to say the right things to him. Then one evening she gives him her personal number, tells him to call if he needs anything. When he is about to end it, he calls her. She quickly convinces him to go home and invites herself over where they meet in person for the first time. She basically talks him in to go through with the suicide, she will help him do it as long as he helps her with something. After they begin to form some sort of friendship, she reveals that she wants “to be with him” after he is dead.

For most of the film we spend our time getting to know Troy and Lorri. There is plenty of character development and lots of talking. Most of it is pretty interesting talk, though some just grated on my nerves. The film was able to capture what could actually happen. It felt like the situation wasn’t that far fetched and never treated like a horror film or exploit (maybe a little) it like they could have. While films like “Nekromantik” went more for the gross out, “Stiff” tries to keep things on a more believable level (I suppose. For an hour and twenty minutes, we have two actors only in the entire film. So that is a lot of weight to bare for two un-experienced actors and they do well. Lulu Benton is fine as Lorri but sometimes I wasn’t sure how I felt about the character and there were moments where she just wasn’t pulling it off. Bill Scott was pretty solid though as Troy. He moped around convincingly where we felt for him without over doing it.

This was a very, very cheap film and while much money wasn’t needed to tell this story, there were a few issues that shown themselves do to this. Most notably the fact that when they were talking about going to bed it was broad daylight out. The majority of the action takes place in a single location and the films sound design is rather poor.

Not a great movie but it was an ambitious attempt at creating something unique and I give kudos to filmmakers Mike McKown and Jim Towns for taking a higher road here and being different. This type of film is a hard sell when the focus is on two characters. For some reason Richard Linklater’s “Before Sunrise” kept popping up in my head while watching it. I was a bit surprised the film ended how it did. Just one of those things where you expect it but don’t think they will go there and I was pleasantly surprised. This film isn’t for everyone but any enthusiast of truly independent cinema will admire the ambition and the hard work that went in to creating a film with a strong script and a solid cast. 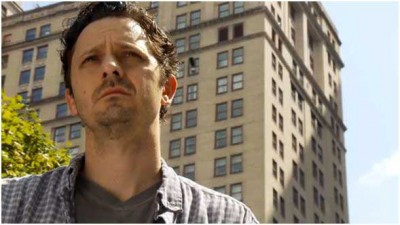