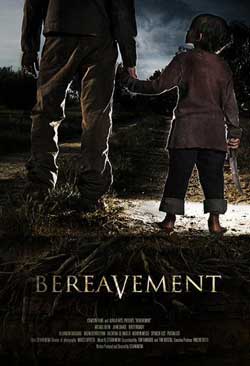 The horrific account of 6 year old Martin Bristol, abducted from his backyard swing and forced to witness the brutal crimes of a deranged madman

Director Stevan Mena’s “Bereavement” is a prequel of sorts to his earlier film “Malevolence”. It tells the story of 6 year old Martin Bristol who is abducted from his own backyard by a deranged lunatic & forced to partake of his captor’s homicidal tendencies. I’m just gonna go ahead & say it right now, a new standard has been set for the psycho genre with this film. All other films from here on in will have to try to top this one & it won’t be easy! The amazing thing is that Mena has touched upon all of the standard tropes that we’ve come to expect from this type of film yet they seem fresh & new here. I don’t want to call the script formulaic because it’s not.

But it does touch upon the required expectations one desires from a psycho film: deranged lunatic, damsels in distress who always seem to do what they shouldn’t, family members who go into abandoned buildings looking for said damsels in distress, etc..The biggest difference between this film & all others of this type is the caliber of actors Mena has recruited (Michael Biehn, John Savage, Brett Rickaby, Alexandra Daddario & Spencer List among others) & the fact that while his script does call on the actors (Daddario in particular) to do things people just wouldn’t do, you can still understand why they’re doing them. This is because of a little thing horror screenwriters seem to neglect a lot called CHARACTER DEVELOPMENT. He has given each character an intriguing back story & as we get deeper into the movie we give a f*ck about them.

They’re not just cookie cut out characters that are there to flash their privates & die horribly while having sex a few minutes later. As a matter of fact, when was the last time you saw Michael Biehn in a horror movie? Right. I never saw him in one either & he is a quality actor who has never (in my opinion) given a bad performance in any film he’s been in. Why he isn’t a superstar is one of Hollywood’s greatest mysteries to me. Any character he plays is imbued with a sort of inner fury. It’s in his face, look carefully at it. It seems to be always taut, as if he’s ready to explode at any moment. even during his tender moments. I would be remiss if I didn’t mention Brett Rickaby & Spencer List as Graham (the psycho) & Martin (his kidnapping victim) and their performances.

Rickaby was at the screening I attended (as was Mr. List) and said a few words about his character afterwards & in all honesty I was still scared of the guy. He is that convincing in the role. At first look he reminded me of a psychotic Larry Fine of The Three Stooges (he even has the unruly hair that Fine had) but there is nothing even remotely funny about him, he is truly terrifying & never goes over the top although he could’ve. As a matter of fact a lesser actor would’ve but his performance is pitch perfect. And young Spencer List is a revelation as Martin who goes from complete innocence to utter depravity & he does it all with his eyes. There is a slow degradation of his character in the film & the youngster nails every scene he’s in. You have to ache for him as his childhood is slowly drained from him in the most inhuman way possible & his fate, while expected, is still heartbreaking to behold. I should mention that his real life sister, Peyton List, is also in the film as Biehn’s daughter & she too is spot on & provides what little humor there is in the script with youthful abandon.

Alexandra Daddario plays the (unfortunate) heroine of the story & you might recognize her from her role as Annabeth in “Percy Jackson & The Olympians”. Her character here, Allison, is also a strong willed young woman who because she lost both of her parents in an accident, is living with her uncle & his family. The character is both naive & brave at the same time. Her bravery comes forth in the way she manages to escape from the kidnappers lair not with fear, but with purpose. Her Naivete manifests itself in her belief that she can save Martin & get back to her uncle’s house safely. She doesn’t know that her uncle has already met up with Graham & in one of the more shocking, unexpected scenes in the film didn’t come away from the meeting unscathed..

Yet Allison soldiers on carrying young Martin despite her wounds & utter exhaustion because she’s a good person who is just finding it hard to fit in with her new family. Daddario’s innocence radiates off the screen but so does her dogged determinacy as well. I don’t know how old she is (Early 20’s maybe)? But she carries the aura of someone who’s been acting for a long while. She was at the screening I attended & she’s almost freakishly beautiful, far prettier in person than on screen & she ain’t no slouch there either. As a matter of fact I have to make mention of the scene where she’s locked in a meat freezer in the basement of Graham’s slaughterhouse. It looked to me as if that freezer was really on & it was really cold in there! I don’t think it was too hard for her to get into character for this scene. How do I know this? Let’s just say that when you see the movie (and you will see this movie) you’ll understand! Ms. Daddario should be a star of the Kate Hudson/Anne Hathaway magnitude & the fact that she isn’t (yet) is a travesty. WAKE UP HOLLYWOOD!!

But for all the fine performances & all of the effort put into making this film, it would all be for naught if the script wasn’t as taught & nerve wracking as it is. I don’t think it’s easy to write a script, good or bad. I know it can be a painstaking process & there are times where a scriptwriter might just chuck away 40 pages of dialogue because on 2nd or even 3rd glance, he knows it sucks. But Mea’s script for “Bereavement” seems so spot on, so damn near f*cking perfect that I really want to know how long he took to write it. Did he have this story floating around his head for a few years? Did it just gush out of his mind in one fell swoop? I have to know because it is one hell of a story.

And there is very little actual humor in Mena’s script aside from Peyton List’ occasional childish outbursts. It is a lean, primed to shock engine geared to horrify us and it succeeds. As the film progresses it gets darker & darker. There is bleakness in every frame of it & it doesn’t end on a happy note like a lot films of this genre do. It is grounded in realism and it’s because of this realism that the film worked so well for me. Shit isn’t always sunshine & lollipops in the real world, you know what I mean? Stevan Mena knows and understands this and he isn’t afraid to show us the uglier side of the human condition. He is a brave director & shocks us not because he can but because the shocks are integral to the story he has written. No compromise, no surrender. You gotta respect that sh*t people. I think Rob zombie could use a few lessons in script writing from Mr. Mena. Don’t get me wrong, I am a devoted fan of Mr. Zombie & his work but his “Halloween’ films are exactly what’s wrong with the genre today & he tried something different! But who really wants to know about Michael Myers back story?

The beauty of the character is that we don’t know anything about him..he’s just an indestructible killer with one goal. Why he can take so many bullets, stabbings, clubbings, etc..is immaterial. We fear him because we don’t know why he can do what he can do. To try & “humanize” Myers was a ridiculous idea! Mena’s characterizations are fresh & feel new because we get to know the characters a bit before the sh*t hits the fan & even afterwards as well. Even though we might think “been there, done that” when the film starts…we don’t feel that way at the (disturbing) ending. If they ever make a “Halloween 3” Mena should be given a shot at writing the script & directing it if he desires. He knows how to make this kind of film & he understands how to make people care for the characters. Even the villains garner some sort of pity in his films. I know people felt awful at Graham’s demise towards the end of the film. That’s a combination of a great actor & a great script coming together in a cohesive manner. Brett Rickaby knew exactly what the script demanded of him & rather than shy away or try to imbue the character with more of himself, he plays his card as the script lays them out. Actually all of the actors do. There is hardly a false note in any of the performances given here.

I really mean it when I say that “Bereavement” is the new gold standard in the “Psycho Killer” genre. That might sound a bit pretentious at first but one you see it you’ll agree. It really is an amazing movie with an amazing cast & a nearly perfect script. I say nearly perfect only because in all honesty, what is perfect? I do have issues with the choices some of the characters make in the film but at the same time I understood that without these choices the film would be 40 min. long & nowhere near as exciting as it is. Mena covers himself nicely by having the audience get to know & care about the characters a bit more than normal . “Bereavement” has to be seen by anyone who considers themselves to be a fan of this type of film & even if it isn’t your usual cup of cinematic tea you should see it anyway & realize what’s been wrong with films that you’ve seen in this genre in the past. It is a stunning achievement in the genre & I can’t wait for his next film! 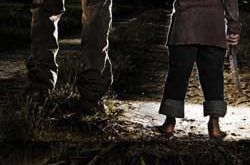 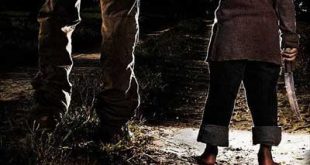