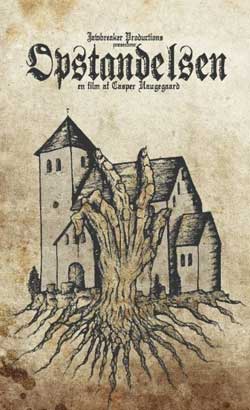 Simon’s three siblings gather at his funeral – where all hell breaks loose as the undead rise from their graves, driving the siblings down into the deep dark catacombs below the church. Surrounded by death, they now have to face Simon and his congregation of zombies in order to escape the house of God in one piece?

Yup, that’s it. That synopsis is the entire story, kit & kaboodle! The film opens in a church during a funeral service & the minister is spouting off all kinds of “Evil is bad, God is great” homilies & really working himself into a lather. During his sermon one girl, Esther, is sitting with a younger girl’s head in her lap. She accidentally drops a rose to the floor & when she tries to pick it up she’s immediately reprimanded by her mother who sternly tells her to respect the proceedings & stay quiet. Esther sheepishly settles back into her seat.

The funeral is for a young man named Simon. His twin brother Peter is supposed to be sitting in the church but he is in another room snorting coke as the sermon proceeds. Upon noticing Peter’s empty seat, Esther’s mother nods at Esther’s brother Johannes, who along with Esther get up to find Peter. They find him in a side room snorting it up & Johannes tears into him for disrespecting the church & his dead brother (who apparently died of an overdose). They leave Peter with his demons & return to their seats leaving Peter alone. He continues to snort Coke until his nose starts to bleed badly & he crawls into the church only to find it overrun by zombies feasting on the flesh of all the parishioners!

What the hell happened? Where did the zombies come from? Well, after watching it a second time I realized it all tied in to the reverend’s speech. He proclaims that “The earth is filled with violence at the absence of god” & “Praise him who has created heaven & earth, ocean & stream, For the earth is soaked with our evil ways & before humanity can mature to it’s end we shall all rise upon the judge’s table on the last day & wash away the past so the lord’s glory once again can shine on the face of the earth”. Whew! That’s a mouthful but it explains what follows. Namely, the last day is today & the reverend’s sermon has come to pass. The dead are rising to wash away all of the evil ways of mankind so that god can start all over again. The rev. doesn’t know how right he is because right after those lines the dead (who are conveniently buried in a graveyard right outside of the church) start to rise up & raise some holy hell on the people inside of the church.

As the parishioners start to sing a hymn, they hear a loud banging at the front door & strange growling sounds…something’s) want in because they’ve got the lord’s work to do. Their job is pretty easy too, just eat everybody in the church! The scene where Peter opens up the door in a drug induced stupor to find the church overrun by zombies chasing & eating everyone is pretty f*cking cool. He seems to think he’s hallucinating & passes out on the ground. When he awakens, he finds himself in the church basement with Johannnes, Esther & the little girl Esther was cradling in her arms earlier. The little girl has been bitten by one of the zombies as well. Initially they argue as to attempt an escape or stay in the basement & wait for help. Eventually, they attempt an escape. Big mistake…

“The Resurrection” or “Opstandelsen” (It’s a Danish title. did I mention it’s from Denmark)? was directed by Casper Haugegaard & he really has a good sense of pacing throughout the film. It starts a little slowly but that’s because of the sermon being given & that sets up the rest of the movie. Once the zombies kick the door in his camera is active & alive. He throws in some “Blair Witch” inspired shots during the middle of the film and even though those shots have been imitated in dozens of films since, in “The Resurrection” they felt fresh & new to me. The movie is also very scary as well. It’s rare nowadays to see a zombie film where the zombies aren’t the result of an experiment gone awry. The zombies here are doing the lord’s work & that’s pretty creepy to me. I’ve had discussions with people about what the bible says & how it could be interpreted as the dead rising to feast on the living so this movie got under my skin just a bit. The gore is plentiful & gruesome as well. Blood & limbs everywhere! And when the zombies get to munching the camera doesn’t flinch away from the carnage. They even seem to savor the flesh they’re about to tear into in some scenes. You gotta respect that. I didn’t know the Danes had it in them to make a movie like this.

There are also homages to David Cronenberg’s “The Brood” & Stuart Gordon’s “Re-Animator” in addition to, of course, Romero’s “Night Of The Living Dead” but they’re not cheap & they enhance the terror rather than remind you that they’re lifted from other films.

I cared about the 3 main characters in the film & although it isn’t a particularly long movie (only 50 minutes) it felt longer in a good way because the director managed to make the characters people you felt for. Especially Esther whose fate I won’t reveal here but you know how these zombie movies roll people. The film doesn’t feature a lot of music either. Most of it is just 2 downbeat notes that sound really foreboding & distressing. There is some other ambient music playing during the film but it’s very muted & sometimes it blends in with the growls of the zombies to the point where you can’t tell if it’s music or the zombies at all. It’s extremely effective & unnerving. The biggest burst of music comes at the end of the film where Peter meets up with his undead twin brother and the two duke it out. Of course I can’t tell you how it ends but I will say it’s left open to interpretation. The film just fades to black at the end as the sun rises & we hear birds chirping in the background. It’s a very eerie & chilling ending & to top things off, after the credits finish rolling, the music continues against a black screen for what seems to be minutes & I was transfixed at the black screen waiting for something to happen while the music kept playing in the background…until it ended suddenly & abruptly with a ….Nah, I can’t say it. You’ll just have to see it for yourselves.

“The Resurrection” gets 4 big Shrouds from The Black Saint. It’s everything that f*cking lousy piece of sh*t I saw yesterday, “Blood Of The Beast”, wishes it was & it’s 20 minutes shorter than that crud. It’s not particularly original but it knows what it’s supposed to do & it does it flawlessly. All technical aspects are up to snuff as well. Seek this one out acolytes, it’s well worth the effort.