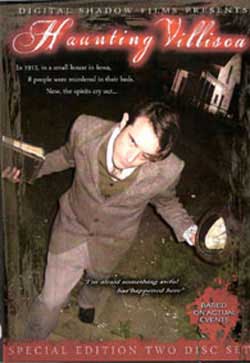 A fictional feature length movie inspired by the true story of Iowa’s historic, unsolved Villisca axe murders and the actual paranormal investigations there. When Professor David Salt’s guilty secrets draw him to the fabled town of Villisca, past and present collide as he is driven to help the trapped spirits, and to seek his own redemption by facing the darkness harbored in the small white house.

When lost souls are stuck roaming the Earth until their murders are avenged, their souls are doomed to reliving their last day of living until they are able to reveal the truth of how they were killed. In James Serpento’s “Haunting Villisca,” a college professor’s infidelity haunts him that intersects a tale of an unsolved mystery of the past demanding vengeance. David Salt’s(James Serpento) life takes a turn for the worse with the suicide of his wife Iola(Kerry Skram), and path to find forgiveness while passing through the town of Villisca, Iowa.
“Haunting Villisca” begins with the backstory of a murderous rampage about the family of JB Moore(Tim Carson), and two young house guests, Ina(Stephanie Dawn Boland) and Lena Stillinger (Scharley Reynolds).

The brutal massacre happened June 9, 1912, and ended up in a court case that charged Reverend L.G. Jacklin Kelly(Francisco Rodriguez) with the murders. Throughout the movie, the story of the trials parallel David Salt’s journey to find forgiveness in his wife’s suicide.

Professor David Salt lives with his psychologically disturbed wife, Iola. In the introduction sequence of David, he is shown not replying to Iola’s sexual advances, leading into his wife’s complete breakdown. David drives down the road bothered by this fact, and teaches his Psychology class as usual. After class, he is courted by his student and secret lover, Riley(Chelsea Long), and during a passionate kiss, Iola enters in full bridal regalia. Shocked, David pulls away and runs to Iola. Iola acts like she is not bothered by seeing her husband kissing another woman, and asks David to deliver an envelope to her father. Iola then pulls a gun, and blows her brains out in front of David.
David is devastated by Iola’s death, and grants her last wish by going on the journey to deliver the envelope to Iola’s father, leaving his mistress behind.

On his way to Iola’s father, his car breaks down in front of the famous home of the ax murdering of JB Moore’s family. He is helped by the citizens of Villisca, and is offered a room to stay in Darwin(Darwin Linn.) While staying, the history of Villisca haunts him and he is drawn to the infamous house of the murderous rampage, and is intrigued to solve the mystery of who killed the Moore family. While having flashbacks and ghostly images trying to draw him into the Moore family home, David sticks to his mission, and awaits his car to get repaired. He leaves Villisca to go see Iola’s father, and is not given a friendly reception from the rest of Iola’s family. After meeting with Iola’s father, and giving him the envelope with her wedding pictures in it, he realizes why Iola had sent him to her father. David begs for forgiveness from her father, and when he does not receive it, he knows what he has to do is beg for forgiveness from Iola’s soul that is trapped in the Moore home.

On David’s way back through Villisca, Riley reemerges, and they go back to a hotel room where David discusses his mission to receive forgiveness from his wife. The same day, there is a group of paranormal investigators plus a camera news team doing a report on the haunted Moore home. David reenters the Moore home, and sees the apparition of his wife. Iola forgives David, which sends her spirit on, and he must end his mission by helping the spirits of the ax murdered victims in witnessing the massacre and drawing closure to their days spent stuck on Earth.

James Serpento’s “Haunting Villisca” is shot with a dual storyline of being in the 1910’s to present day 2000’s. The legend of the JB Moore family massacre serves as the influence to the movie, and the court case intermixes with the storyline of the present protagonist, David. The gripping story that intertwines infidelity and forgiveness is something that is not only a problem in the past, but also affects people in the future. David’s journey to forgiveness with his wife is empowering, and teaches the viewer to appreciate the life that they are blessed with versus taking things for granted.