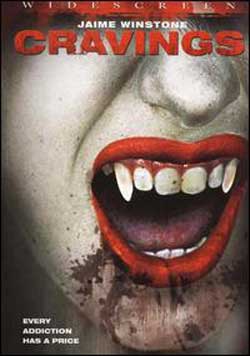 Stephen is having a rough time with his life. His wife has committed suicide and his friends are worried about him returning to work. You see though Stephen is a psychiatrist, it’s his purpose in life to help other people. Stephens’s new patient Nina however may be a little bit more than he was ready for. Nina has the need to see and drink fresh blood, but vampires can’t be real….can they?

“What are you going to do if you have a real vampire on your hands?”

It is all around us; once again the vampire is rising in popularity as the “in-monster” at the moment. Teenagers can’t get enough of the vampire, there are so many comparisons between the things a teenager feels and the way a vampire does that I could not list them all. As long as there are isolated and lonely teenagers in the world, the vampire will continue to come out of its grave and dust itself off and grace the screen. Over the years the vampire has went through many transformations, a way to keep the timeless monster fresh. Some examples of this include the vampires from 30 Days of Night who are hyper violent killing machines there are also vampires like the ones in Interview With A Vampire who are passionate and have emotions and feelings. With the popularity of the vampire once again on the rise it isn’t any wonder why suddenly titles portraying sexy women with a pair of fangs aren’t being found on the new release shelves. One of these said titles is D.J. Evans’s 2006 film Cravings, also known as Daddy’s Girl.

When one glances at the cover art to Cravings they instantly get the image of the classic vampire in their mind, I mean really its hard not to with that image. Cravings however is far from a stereotypical vampire film, in fact the “vampire” of the film is more of a mentally disturbed teenage girl, hardly the cape clad creature who seduces in the darkness.

Cravings tells the story of a psychiatrist named Stephen; he isn’t really having a good time at the beginning of the film. In the first few minutes we see Stephens’s wife commit suicide by slitting her wrist in the bathtub while Stephen breaks the door down to make sure she is alright. Stephen’s head is obviously in the clouds and all of the medication that he is taking really isn’t helping the situation. Stephens’s mother also is very sick and dying in the same hospital where he works, this really doesn’t help matters at all for the young man.

Stephen returns to work and we are introduced to the character Nina played very well by Jaime Winstone. Nina has a large cut on her arm, which she claims is an accident. Stephen believes that the girl is purposely hurting herself and he decides to begin to evaluate her.

Stephens’s home life has also started becoming rather strange. His water keeps randomly coming on; a plumber tells him that it’s his wife trying to warn him about something. Stephen however just decides to shut his water off in order to deal with the situation. This is one aspect of the film that I would have liked to seen dwelled on a little further. They mention that his wife might be haunting him in several scenes, but it is just mentioned never really explained or taken advantage of.

Nina’s mother Liz is upset when Stephen explains to her that he wants to keep her in the hospital. He wants to find out why the girl has such an appetite and desire to see blood. Liz however claims that there is nothing wrong with her little girl that can’t be fixed with just some visits. Nina also has a friend named Lucy with who she shares her blood play with. If you seriously do not see the humor in the names of the characters here, you obviously don’t know much about the vampire.

While seeing Nina Stephen’s mother suddenly dies unexpectedly in the hospital. Well not really unexpected, Nina accidentally kills her trying to get to the pack of blood hooked to Stephens mother, she wakes up and causes Nina to be startled and to break the very things keeping the mother alive. Stephen doesn’t know about this though, and while he continues to see Nina he also begins to develop a relationship with Nina’s own mother Liz. Now Stephen has an angry patient, who is capable of causing serious trauma to all who cross her path.

D.J. Evans Cravings is a great low budget film. The soundtrack and the style of the film give it its very own mood, which is very dark and gloomy. The film mostly centers on depressed people, so it is only right that the film should come across this way.

Jaime Winstone’s performance as Nina is what sells this film though. The girl just flat out looks evil and always like she is up to something. The scenes in which Stephens mother is killed, and of course the scene in which Nina puts Stephens dog into a blender in order to make herself a “blood shake” (a beautiful shot I must say) show just what kind of person she is.

Stephen believes that Nina is suffering from Renfelds Syndrome, which is a real disease. He believes that the young girl gets sexually excited by the thought and taste of blood, and that she really does need help. As you can see there are no super natural elements to Nina’s vampirism, she is merely a sick girl, and she could be that sick girl who lives just down the street from you.

Cravings also throws a surprising ending your way, very similar to films like Audition. There are parts of Cravings that do seem to drag along, like I said it’s really a film about depression and the ugliness it can cause, anyone who has ever suffered from depression knows this feeling all to well.

There isn’t as much of the red stuff in Cravings as one would expect looking at the cover art and reading the synopsis on the back of the DVD. What is there however is painful to watch, and very realistic looking, especially for anyone who has ever been around a “cutter” in their life. The special FX team did manage to make me wince several times due to needle shots that seem to come out of no where.

I recommend Cravings to the vampire fan who is looking for something more than a fancy dressed person with a pair of fangs. Just remember Nina isn’t the stereotypical vampire, and she could be that little girl that lives down your street.