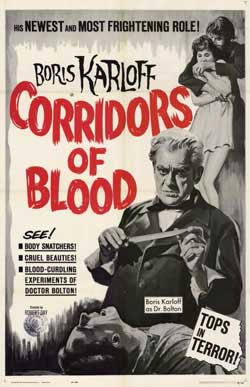 In the days before anesthesia, surgeon Dr. Thomas Bolton (Boris Karloff) experiments on himself with a newly discovered gas in this classic horror thriller. The good doctor soon becomes addicted to the gas, and his desperation for the drug leads him to make a diabolical bargain with a gang of body snatchers who provide hospitals with corpses for dissection: They supply Bolton with the chemicals as long as he signs false death certificates.

Surgeon Dr. Thomas Bolton creates anesthetic using opium. As he experiments with the anesthetic on himself, he becomes addicted to it. No one believes it will work and will not finance his efforts, so he receives his chemical supplies through an awkward partnership with a group of local murderers, who provided him with the chemicals in exchange for his signature on the death certificates of people they murder to sell to the hospital for medical students.

Corridors of Blood (1958) is the story of a doctor trying to discover the secret of painless surgery with anesthesia. It is not based on any true story that I know of relating to anesthesia but I can imagine that similar things could have or did happen during the 19th century. This is not really a horror film and, although there are a few horrific elements to this story, this is more of a fictional historical account of the pains of surgery during the 19th century and how some doctors were in a scurry to discover a way to anesthetize patients from the painfully cruel surgeries of the day (and probably the fame associated within the medical community). Mix into that the deterioration caused by drug addiction on the doctor and the low depths to which a greedy derelict will go to in order to make money

Corridors of Blood has a great atmosphere for a horror movie of any budget. It is set in the Seven Dials area of London, well known for its being a slum and crime-ridden area back in the 19th century. It’s the perfect setting for a movie like this. It looks really dark and gritty and, with just one look at it, you can tell that it’s a place where lots of illegal practices and murder occur, not unlike the Whitechapel area of London, where the Jack the Ripper murders occurred.

All of the actors are great here especially Boris Karloff. He plays the part of Dr. Thomas Bolton to the nines and you can see why Karloff is one of the greats and not just a talentless horror actor. His role here is not one of horror, at least not a supernatural or fictional dark type but, rather one of a serious character trying to do good for the world and in the process becoming addicted to the drug with which he is trying to do good. Due to the addiction, he gets fired from the college where he was receiving funding. He has become addicted to the drugs as well as addicted in his obsession with the search for a usable anesthetic. You can feel his anguish and pain as he realizes what the drugs have done to him but the drugs have become too much of an addiction to ignore, so he recruits the services of a local criminal named Resurrection Joe, at first by coercion and later by need.

Christopher Lee is great as the ruthless and unremorseful Resurrection Joe, a criminal whom, with his gang of thugs, has created a donated body scheme whereby they kill people no one will miss, get someone professional, like a doctor, to sign their death certificate to make it appear legitimate and finally sell to the local college to be used in medical studies with the students. Dr. Bolton is his latest professional used in the scheme, in which he trades the doctor’s signatures for a steady supply of drugs to use on his experiments and to feed the doctor’s own drug addiction. The scheme had gone too far for Bolton to get out of it. I would have liked to see more of Resurrection Joe in other films, maybe as the main character in his own movies.

Some of the music is dark and brooding, perfect for a movie such as this. Speaking of music, Rob Zombie wrote a song in homage to this movie, entitled The Ballad of Resurrection Joe and Rosa Whore. By the way, Rosa is another character but doesn’t play a large role in the movie.

Overall, while this is not blatantly a horror movie, it has some very dark aspects to it – drug addiction and murder. It is a fine exhibition by Karloff and Lee, both always great to watch. I recommend it to horror fans, even if just to see Resurrection Joe. 4/5