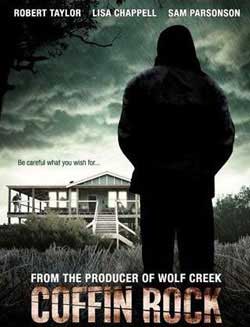 Jesse wants a baby more than anything in the world. Since her husband Rob is having problems impregnating her they go to a medical clinic for help. While they are there they catch the attention of a psychotic young man who works there named Evan who becomes obsessed with Jesse within moments of laying his eyes on her. He then integrates himself into Jesse and Rob’s lives (who are having marriage problems due to the fact they are unable to conceive a child). One night Evan approaches a drunken Jesse while she is home alone and things become intimate between them. She soon discovers that she is pregnant and once Evan finds out he goes to disturbing and increasingly violent lengths (including murder) to be with the mother of his child.

I really don’t think that you can call “Coffin Rock” a horror film as it is more or less a suspense thriller. It belongs more in the same category as “Fatal Attraction,” “Malicious,” and “Swim Fan” as it shares many of the same elements as these films. The filmmakers do try something a little different though as this time it is the woman who is being stalked and victimized by the spurned lover. While I’m not really a fan of these types of movies so to speak and would much rather spend my time watching something that is more horror-related, I’ll have to admit that “Coffin Rock” was a lot better than I thought that it would be. After reading the film synopsis I thought that it sounded more like a Lifetime movie than anything and was expecting the worst but after watching it I was surprised by how good it actually was.

The plot, while far from original, is actually pretty entertaining. As I mentioned earlier I like the fact that they went a different route for a change and made the woman in the relationship the one that is unfaithful. It puts a different spin on things when it is a male character playing the part of the psychotic, rejected lover and I applaud writer/director Rupert Glasson for taking a different approach because it works (thanks in part to Sam Parsonson’s performance as the disturbed and unstable Evan). It was a nice change to see the roles reversed and was fun to see a woman basically play the same role that Michael Douglas played in “Fatal Attraction” for once.

There is one huge difference between this film and others of its kind, however. While in “Malicious,” “Swim Fan,” and the others the main character willing had sex with the person and that is not quite the case with “Coffin Rock.”

Evan pretty much rapes Jesse even though she invited him into her home and is the one that initiates things by kissing him. She tells him several times to stop after they have started having sex and he chooses to ignore her. To me this constitutes rape since she told him to stop and he refused to do so. Still, she didn’t really go out of her way to make him stop either and as such there are some people who have seen the movie who argue that she wasn’t raped and was having sex with Evan willingly. I believe that she was attracted to Evan and was a little curious about what sex with him would be like, but once things got started she had second thoughts very quickly once it sunk in that it was actually happening. I think that she was raped though if you talk to someone else who saw the movie they may argue otherwise.

The characters are done pretty well but I have to admit that I really didn’t care for Jesse and personally had trouble feeling sympathy for her. In my opinion she had just as many mental issues as Evan did and in general she just wasn’t a very good person. She had an unhealthy obsession with having a child and since her husband Rob couldn’t provide her with one she basically treated him like garbage. We see her busting his (non-working) balls for most of the movie, getting drunk and flirting with other guys, and pretty much blaming him for everything that was wrong with her life.

She isn’t a very likable character and it was because of that fact I really didn’t care what happened to her to be honest. I did like Rob however and felt sorry for him. Not only did he have to deal with the fact that he couldn’t get his wife pregnant he also had to live with her obvious mental problems as well as her tendency to flirt with other men (including one of his coworkers). Rob puts up with quite a bit when it comes to Jesse and I think he has a lot more patience with her than I would. Sam Parsonson does a convincing job playing the psychotic Evan and I think he had a good time with the part. Watching him change from a sweet, charming young man into a deranged, violent psychopath is fun and you can’t wait to see what he is going to do next (though I disagree with what he does to the baby kangaroo as it seemed to be pointless and completely unnecessary to me). The only problem I have with Evan is that he becomes Jason Vorhees-like toward the end and seems to be impervious to injury.

There is not a great deal of blood in “Coffin Rock” so those of you who like a little gore in your films will walk away unsatisfied. We have a person beaten with a phone, someone set on fire, and a man stabbed in the eye (off screen). Sadly there isn’t much of a body count and the murders that do take place aren’t anything to write home about. I know that it isn’t a hard core horror film but I do think that having a few more bloody deaths wouldn’t have hurt anything and would have made things a little more enjoyable.

Though I had my doubts at the beginning I actually liked “Coffin Rock” once I got into it. The beginning is a little slow and while it takes it a little while to get going I still think that if you are willing to be patient you will find yourself enjoying it. There are several flaws (the thing with Evan and his father is silly and predictable and you’ll see the final “twist” at the end coming a mile away) but overall it is not a bad movie. The next time you just aren’t in the mood for another movie about a masked killer slaughtering teens and are craving something that leans a little more toward the suspense/thriller side I suggest you give “Coffin Rock” a view.