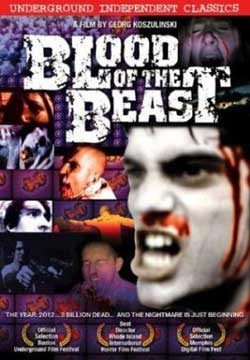 In the year 2012 the third world war ended, killing over 3 billion people. Ninety eight of the surviving male population is rendered impotent because of the chemical weapons that were used during the war. To repopulate the Earth scientists mastered the art of cloning human beings. All is well until the first batch (strand) of clones reach their 18th birthday. At that point they become hungry for human flesh. Who will survive the attack of the bloodthirsty clones?

It has finally arrived my acolytes! It’s finally here! The first film that gets 0 Shrouds from The Black Saint! A dubious achievement perhaps but an achievement nevertheless. You all know that your favorite Saint always finds something to tout in even the worst of the worst but this film is just beyond the pale in terms of it’s badness. And what makes it even more terrible is that it’s director is apparently trying to make a “Message” movie here. He fails miserably.

But what’s the name of this stinkeroo? It’s called “Blood Of The Beast” and it is one strange, f*cked up movie people. Director Georg Koszulinski (who also plays Jesse) seems to think that he is making some kind of statement on something. On what I couldn’t tell you quite honestly. I took me 2 1/2 days to watch a 70 min. movie because I just couldn’t keep my eyes open long enough to watch this moronic dreck for more than 15 minutes at a time before I fell asleep. The film opens with stock footage of what appears to be WW II & some title cards superimposed over the footage explaining that there was a third world war that killed 3 Billion people. In addition to the massive loss of life, 98 % of the remaining male population has been rendered sterile due to the chemical weapons used during the war. So science stepped in & perfected human cloning. all is well until 18 years late when the first clones (or “strands” as they refer to themselves) turn 18 & begin to devolve into flesh hungry zombies.

So let’s get right to the point, What’s wrong with this movie? Let’s start with the opening credits, or lack thereof so to speak. The film opens with some really grainy tock footage of what looks like WW 2, which is fine except the film ostensibly takes place in the year 2030 & the year that the supposed war was fought was 2012. I would think that there was some stock footage laying around from a more timely war. You know maybe some jets, a couple of tanks rolling over rubble..sh*t like that. But noooo, what we get is dated footage of a war with soldiers wearing some really old uniforms & some mortars being fired off into the distance. It’s over this footage that our story is introduced to us through the use of title cards. Cut to a classroom in the year 2030 (although it’s never really stated what year the film takes place in, it has to be 2030 because of what we were told earlier).

Now if I’m in school & It’s the year 2030 I’m expecting some George Jetson sh*t in my classroom. You know some holographic teachers, computers all over the place & some really funky clothes as well you know? Well Georg doesn’t think so! What we get is a room barren of any markings that it’s a classroom at all & some ordinary school tables & chairs. If I’m even alive in the year 2030 I would like to think that the school system is going to be a little more advanced than this. One of our students is feeling ill & while relaying his condition to a fellow classmate he suddenly starts bleeding through the nose & collapses. When someone tries to help him..he bites them on the arm. It turns out that he was one of the first strand of clones made 18 years ago. Slowly, very slowly, we find out that all of the first strand of clones are devolving into primal beings who want nothing more than to kill all who stand before them & maybe chew on their flesh a bit as well.

The film tries to follow 3 groups of people & their struggles against the first stranders. Three people who are hiking in the woods, three who are in an apartment & three who are holed up in what seems to be a disaster shelter. That’s nine people that we don’t give a flying f*ck about. It’s pretty hard to have a film where there is no one to care about even in the slightest way but here it is. I felt no emotional connecting to these people at all & I don’t see how anybody could. They’re just faces in a (very small) crowd who constantly do the wrong things. The 3 in the apartment seem to know of the three that are hiking & decide to go find them even though they know they don’t have much gas in their car & the three in the woods seem to know where the shelter is & are trying to get there…I think. And the three in the shelter seem to know about the others outside but just end up bickering with each other while the world is ending all around them. and what’s the deal with the cows? Every so often we get shots of cows grazing in a meadow, close up’s of the cows faces, etc..etc. Why is this? I haven’t got the slightest f*cking idea…

The whole film smacks of a “message” movie. What that message is I don’t know. What I do know is that just because you got some cameras & some fake blood lying around, it doesn’t mean you can make a f*cking movie. Fuck, I’ve got cameras & fake blood at my disposal & a bunch of friends to act like zombies but that don’t mean I’m gonna make a movie (just yet). To make matters worse, one of the characters in the shelter is a bible thumping moron who is constantly yelling about “God’s will” while waving his bible to & fro. In the interim, the other six characters are making the wrong decisions even after having been attacked by these first stranders.

It gets better though. Director Koszulinski decided to get all experimental with his approach to filming this dreck so the film stock seems to be changing constantly & sometimes the film seems to be coming off of the spool or melting under the heat of the projector bulb. It fades in & out on occasion & every once in a while he throws in some more stock footage from WW 2 to superimpose over the proceedings to tell us….what? What the f*ck is this f*cking movie about? But wait..it gets even better! Koszulinski decided to film the last 7-10 minutes of the film silently. The actors mouth their dialogue but he uses title cards to tell us what they’re saying! WhywhywhywhyWHY? It’s so f*cking stupid it defies description. Of course he gives himself the final shot of the film as he stares morosely into the camera as he’s overcome by the zombies. What an important statement that is! It’s all accompanied by music composed by Koszulinski as well (he is a man of many dubious talents apparently). The music sounds like Philip Glass on a really bad day & did nothing but add to the headache I was suffering through watching this debacle. The editing is awful as well. There seems to be a cut every 5 seconds or so, sometimes a strobe effect is added to confuse whatever fool (me) is watching. And towards the end he seems to be filming with night vision goggles on while looking through a paper towel tube. The film is an absolute atrocity & I’m sure my editor must hate me now for assigning this movie to me. How have I offended thee O grand editor of mine? Please tell me what I’ve done wrong so that I might correct my mistake & not have to sit through something like this again….please?

Now here’s the best part of all (always save the best for last I say), this craptacular mess has actually won a couple of awards! It won Best Director at the Rhode Island International Horror Film Festival which leads me to believe that I’ve got to visit Rhode Island very soon to pick up some of whatever they’re smoking up there. It’s gotta be some powerful sh*t!! It also won the “Promise” award at the Dahlonega International Film Festival. I can see the director winning this award if it meant he promises not to make another movie but I’ll be damned if he hasn’t made 8 more of em’! Mostly documentaries but he’s still out here somewhere with a camera….waiting.

I think I can say that this is a film with absolutely NO redeeming qualities whatsoever. There is little to no blood, little to no talent in front of the camera & little to no talent behind it either. If a filmmaker wants to make a statement about something then he should just go about his business & not try to hide his statement in an ersatz zombie film. I’ve seen a lot of micro budgeted movies & the filmmakers usually seem to know that they have to make the best of their resources & don’t try to shoot for the moon. They just try to make an entertaining movie. But these clowns wanted to make something important. All they did was give me a headache & you’ll get one too I guarantee. ZERO SHROUDS from the Saint for this celluloid abortion born from the mind of a guy who really has a high opinion of himself I think. Oh well…at least they like him in Rhode Island (What are they smoking there)?

Tags Blood Of The Beast