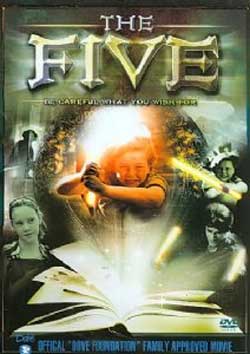 In this family-friendly adventure flick, five kids passing their summer vacation in a Colorado suburb begin to realize that the world around them has transformed into the one described in their favorite fantasy books. In order to get back to their real lives, they’ll have to stick together and follow the clues that will unlock the mystery that surrounds them. Dan Lauria, Madisen Beaty and Ben Larned star.

Directed by: Dave Yasuda
Written by: J. Reuben Appelman
Starring: Madisen Beaty, Emily Cho, Allison Larned, Ben Larned, and Ry Feder Pruett
Not only do children have to face problems within their daily lives, but they must also deal with the instance of having an imagination that can take them outside the troubles of their normal world into an extraordinary alternate dimension in which fantasy is what dreams are made of. In Dave Yasuda’s “The Five,” a group of young kids are faced with an alternate view of their everyday lives, which allows a greater appreciation for how and why they must deal with what is dealt to them. The children deal with real life dilemmas as divorce and death of a parent while having to go on with their future in the less painful way possible.

“The Five” begins with a soccer game being played, where Jackson(Ry Feder Pruett) cheers on his older sister, Adilyne(Madisen Beaty.) After the game ends, Jackson and Adilyne are confronted by their step-brother Marcus(Ben Larned) and the shy non-confronting younger sister, Malia(Allison Larned.) Marcus is snobby in nature, and bullies his step-siblings accusing their father of intruding on their recently widowed mother. Marcus and Malia recently lost their father in the war in Iraq, and Jackson and Adilyne’s father ended up marrying the mother of Marcus and Malia.

Even though the children must face the reality of their parents being split apart, they find release in a book series called “Hexagon,” where a fantasy hero must fight black magic while leaving a mark of the hexagon in places in which the hero moves through. Jackson and Malia find the most interest in the book series, and even Jackson makes a wish on his birthday to be in Hexagon’s world. Jackson’s wish comes true when Adilyne and friend Renee(Emily Cho) awaken the next day finding their mother disappeared. When they leave the house, their house evaporates into thin air, and they run to Marcus and Malia for answers. Of course, Marcus and Malia discover their parents are gone also, with their house disappearing soon after stepping outside of it. Then and there, they realize that fantasy has become reality when Jackson confesses his birthday wish. Their only escape back to reality is to evaluate “The Five Truths” laid out by the book series, and correlate these lessons into their young lives.

This fantasy/drama film has young children learning adult values through reevaluating happenings in their lives, and learn a more peaceful way of understanding why things are the way they turned out. The child actors that were the five main characters were very shaky when delivering their lines, and took away from the believability of the movie. This family friendly film is dialogue heavy, with small instances of action that drives some of the best fantasy genre movies. Also, at one point when the kids are in the world of “Hexagon,” the kids must fight the black magic with corny CGI light sabers that adds unwanted humor to the serious film about kids learning how their life has more significance than fighting about trivial things.

Dave Yasuda’s “The Five” is a fictional fantasy/drama about the struggles children must deal with when they are matched with adult problems as divorce and a spouse dying. However, entering a fantasy world of a hero that can defeat all things evil, life lessons are taught to the grief-stricken children, teaching them lessons in courage and handling problems that will last the rest of their lives.