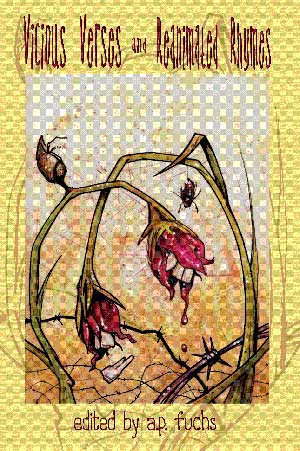 You plot a course
For the day
Someone meddles-

I really need to move on from Z-Lit for a little while, before my tolerance is completely lost, but at least this is something a tad different. Not a short story collection or a journal of the end of our days or even a full out novel, but a collection of Zombie Poetry. I never would have thought I would see those words, in that order and proximity on my computer screen as I wrote a review, but why the hell not, eh? Let’s dive into this fleshy soup.

Vicious Verses is bookended by somewhat long (by non-epic poetry standards) narrative poems that do well to set the stage for the work as a whole. “Isabella”, by Adam Huber, tells us the tale of a father and his zombie daughter while “Payback Time” by Paul Freeman is one of love, death and vengeance as a teen among the undead. What these two have in common, despite two very different emotional cores, is a strong sense of the interior life of the characters. That approach of givining small splashes of insight runs through the entire collection, creating a feeling of global devastation in a wide variety of voices, styles approaches and points of view.

Most of the poems, like those listed above, tend toward narrative, one of the best of these being Camille Alexa’s “Such a Little Thing”, quite a moving story that centers more on the pain of loss than cannibalistic goodies. “Zombies at my Door” (John Hayes) makes a nice change into the traditional Voodoo Zombie tale, as does “I Zambi” (Kyle Hemmings), earning both authors my thanks for remembering the roots of the genre. “When the Dead Were Among Us” (Kara Ferguson) had me cheering with a single line: “We were saved by the videogame.” And “Former Vocations” (Aaron Polson) provides marvelously personal snapshots of the end of it all.

Then there are the more emotional/sensory based works, sharply punctuated attacks of interior imagery like the mind-blowing “Slow Bites” by Steve Vernon. Easily among the best of this collection, we see the zombification of a family and resultant feeding upon our dear narrator as an extension of the slow nibbling away of his life that has occurred since his birth. Jennifer Williams, once again with a single line (“I have faith in the emptiness of my soul”), moved me to new dimension via “Incarnate”.

Acknowledging that humor exists alongside horror and suffering even in the worst of times, there are plenty of gorgeously silly works like Mat Betts’ “My Zombie Journal” (“Brains in brains brains brains brains the brains. Others won’t share brains with the brains of us.”). Shaula Evans approaches “The Burning Zombie Question” none of us dare to mention: What about the poop? And two words to blow your flippin mind: Zombie Limericks! Yep.

A moment needs to be taken to mention the effortless use of form by some of the poets present. JC Hayes (“They Eat Our Brains”) and Tonia Brown (“A Zombie Sestina: Only Flesh”) help provide examples of how formal poetry can be used without drawing undo attention to the form itself. Thank you for that.

Finally, there were a few odd balls. “Zombie Slave” (John Platt) left me confounded for a moment. Meanwhile, “Me Returneth” (W. Bill Czolgosz) left me howling at work. I honestly don’t know a good way to describe these without giving the fun away.

Fuchs took a bit of a risk with this anthology, but it pays off overall. The closest to a problem that I came across, besides the occasional clunker, was that the volume of poems present tends to make them all blur together if read consecutively. If you give yourself a couple days’ break every 30 or so poems, though, you’ll find some great work here.