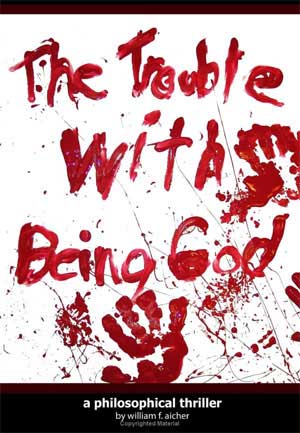 Before I started reading The Trouble with Being God, I did a little research on the book and its author. The information really got me pumped to read the book, as the author seemed to be after my own heart. The author, William Aicher, works as a Director of Marketing for an online sheet music retailer and graduated college with degrees in Journalism and Philosophy. As myself being a student of advertising and religion in college, and having always held a strong love for music, the combination of the author’s interests left me intrigued to see how he would weave them all into his story. Furthermore, having dubbed his book a philosophical thriller, rather than a psychological thriller, or even a horror novel, all but left me wondering where this book would be taking me.

The very first element of the novel that caught my attention and immediately set it aside from other novels I have read in the past was that Aicher had created a music playlist for the novel. Throughout the novel, a number of footnotes were present, which indicated recommended listening selections that chronicled the various moods and events of the book. Aicher explains in his preface that the proper way to intertwine this playlist with the reading of the book is to, “listen first, then read on.” But, he also notes that it is not necessary to follow the playlist in order to fully enjoy the novel. (There is a playlist of his selected songs on his website for readers www.beinggod.com .)

Although I tried to follow with the music selections when I first started the book, I found it hard to keep up, as I was not always near an Internet source while reading. In retrospect, it would have been ideal to download the songs ahead of time and have them ready to be played on my mp3 player. Nonetheless, I still found it fun to go back after the fact and listen to his music choices. It was easy to tell where most of the songs fit into the story, as he tended to choose songs where the lyrics mimicked a certain part of what was currently happening in the story.

But, I digress. What follows is a plot summary of the story, without revealing too much detail. Part of the fun of this book is in riding through the journey yourself and figuring out the meanings – not having someone else tell you point for point what happens, without the grisly details Aicher provides for the reader. The novel starts out with a heavy scene of murder, which the reader is given more details about quite a few chapters later. After the intense first chapter, the story quickly introduces Steven Carvelle, the main character, and his girlfriend, Karen, and their struggling relationship. Four pages later, Chapter 3 introduces a new murder: a crucified priest hanging outside an abandoned brewery. Miles, Steven’s best friend and the detective on the police force in the town of Courtsdale, gives Steven special permission to enter the crime scene. Steven is a feature reporter for the Courtsdale Courier and is well-respected in town for his stories, as he keeps them fact-based, rather than sensationalizing them for attention. More murders emerge, each one more brutal than the last, and each with a religious message accompanying it. Both Miles and Steven work hard to try to figure out who the serial killer is, while Steven finds himself having more and more difficulty grasping reality. As the killings continue, his own dreams become increasingly more brutal, leaving him confused about his own life and his purpose while on earth. Furthermore, the police, and even Miles, his best friend, start to question Steven’s whereabouts, making him a prime suspect in the case.

The novel is a very quick read, both physically and from a mental standpoint. Most chapters are no more than a couple pages long, forcing the story, in a way, to move fast. When I first started reading it, I thought this aspect would get annoying, as with each new chapter usually comes a different character, making the novel jump from different sub-story to different sub-story. But, all of the sub-stories come together well in the end to create a solid novel. In retrospect, the style is very similar to that of Dan Brown’s (if there are any fans of his novels out there). Aicher uses the style very successfully, keeping the reader constantly wanting more. In the beginning, it was a little annoying, as the chapters were mainly used to set up characters, with little gore in between. But, as the story developed, the murders and philosophical ideas were explored more.

I very much enjoyed the novel and definitely recommend it to others, albeit not as the traditional horror genre read. The murder parts of the story are incredibly gory, though. I think reading about the brutal murders in the story and picturing them in my mind made my stomach churn more than most gore films I have seen! While I enjoy Aicher’s choice in naming his novel as a, “philosophical thriller,” the philosophical discussions tend to be brief. I think the novel could have been more complete and impactful from a philosophical standpoint if he delved into the discussions between the two main characters, Miles and Steven, more, rather than keeping them as basically coffee table discussions.

The novel is very thorough in describing Steven’s feelings about religion and God – that of a non-believer. Yet, it fails to give the opposition, the believer (both Steven’s best friend, Miles, and his girlfriend, Karen) much say. I always find it more powerful to assert one’s point by acknowledging the opposition and proving it incorrect, which Aicher never really attempts to do (seeing that this is essentially more than likely Aicher’s own beliefs coming out). While I understand that as a fiction novel, this is not a normal occurrence, as a “philosophical thriller,” it might be a nice touch—as a way to strengthen the story and its characters.

With The Trouble with Being God as Aicher’s first novel, he definitely caught my attention. I look forward to seeing what other gruesome, anti-religion stories he conjures up! Make sure to visit www.beinggod.com for more information about the author and the book.

Tags The Trouble with Being God William F. Aicher