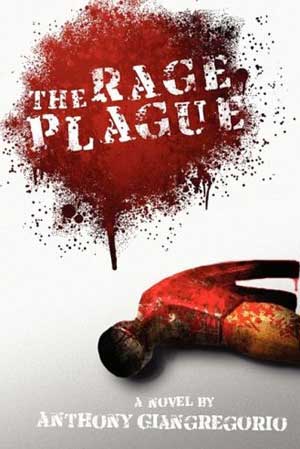 Horror fiction tends to come and go in cycles. One month or year vampires will be all that show up on store shelves, and once the fad wanes the subject du jour may well slide into ghosts or witches or evil houses that swallow entire families. Publishers go with what will sell, and if current publishing trends are any indication, zombies are here for the long haul. There are so many these days that both fans of reanimated corpses and parkour-style runners have an ample list of titles to choose from.

Bibliophiles who pick their latest reading material at random or simply through the pull of interesting cover art will surely be drawn to Anthony Giangregorio’s The Rage Plague. As far as covers go, they don’t get much more minimalistic and blunt than this. The art design is deceptively simplistic, a stark white background framing an ominously bloody hammer. The title font is stenciled into a large, gory blood spatter. If this doesn’t pique the interest of a horror fanatic, nothing will.

The Rage Plague’s central plot is fairly straightforward. Chicago is burning, and between the flames and gutted buildings wander people driven by terrifying anger. They swarm, attacking until their victims are reduced to crumpled limbs and smears of blood, often devouring them the way a starved animal tears into fresh meat. On the rooftop of an elementary school, a motley group of frightened people look down on the horror below. Their neighbors, spouses and children have turned on them, for reasons unknown, and no corner of the city is safe. Where can they find safety, and what is behind the collapse of civilized society?

This novel is one of the latest “Are they zombies or aren’t they?” stories in the wave of post-apocalyptic, something’s-wrong-with-everybody fiction that’s been crashing over the horror genre in the past few years. Shambling undead these people are not, though they are gripped with an anger and desire for blood the likes of which haven’t been since since the first 28 Days film. Readers looking for Romero style ambulatory corpses should move on, but those with an interest in gorier medical-style horror may find exactly what they’re looking for here.

The Rage Plague is very character-driven, which may in this case be both a blessing and a curse. The cast is large, despite the novel’s rather sparse length (it clocks in at a swift two hundred and forty pages), and most characters get their fair share of focus time. Unfortunately, the characters often come off as caricatures, molded off of heroes and villains most readers would recognize in other stories. There’s the aging protagonist with the tragic past, the gruff military man who refuses to budge, the young upstart who thinks with the wrong head and the formerly tormented outsider who seizes his chance to make the world pay. Female characters of nearly every kind (wise older woman, love interest, hysterical victim) make appearances, some more crucial than others, but the story never quite gives off an impression of uniqueness. Everyone, male and female, feels like a cinematic character making the transition to the page, and it works as often as it doesn’t.

The story driving The Rage Plague is also something that most fans of the genre will have seen before. Instead of being something altogether new and unique, the novel retreads the path of film and fiction staples that have come before it, and while most readers will have an idea of what’s up way ahead of time it’s not an unpleasant journey at all. Somewhere within all of the familiarity lies a rather entertaining story, and those who don’t mind revisiting well known genre tropes will find themselves pleasantly entertained for the duration of the novel.

There’s really nothing wrong with sticking to what works, and while the novel may stick just a bit too closely, where it shines it really shines. While it may lack in originality, The Rage Plague entertains with its snappy dialogue, fast pacing and violent, bloody detail. Characters argue, threaten, trade witticisms and ruminate on their situation like pros.

Giangregorio’s novel will certainly never be credited with reinventing the genre, but enthusiasts of infected-style zombie stories could do worse than this. Sometimes a book is meant to enlighten, educate or introduce new ideas; sometimes a book is meant simply to entertain. There’s enough blood, guts and action here to satisfy most casual fans, and it’s a quick enough read to still be a fun ride.