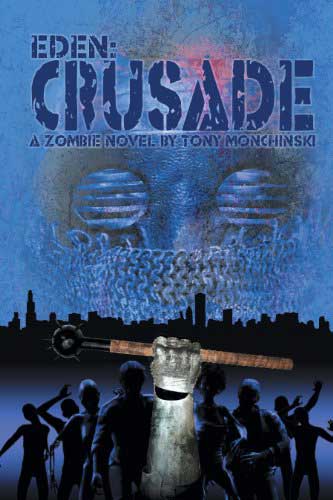 Eden: Crusade is the follow up to Tony Monchinski’s first popular Eden novel. It features several important and well known characters (big bad Bear, pregnant Julie, feisty Gwen, movie-loving Mickey, and the once proud and strong Buddy) from the first installment as well as the same flesh hungry hordes of ravenous undead. Like the first it is told in a jumbled up sequence that seems a little disorienting until the entire story unravels. The first Eden read like a well written murder mystery set smack in the middle of a devastating zombie apocalypse Crusade is a straight up well told apocalyptic survival story.

Crusade opens with a man in heavy protective gear readying himself for a battle against an entire town full of the dead. He pushes a wooden cart full of enough fire power to make a drug cartel jealous and carries with him a swaddled bundle. Amongst the dead vehicles he places weapons and barrels full of gasoline. A woman joins him and they stand off against a horde of the undead. In my opinion, in the opening sequence Monchinski establishes the nice balance he maintains through out the novel. The action in the opening scene is frantic yet methodical. It goes on for awhile (roughly twenty five to thirty pages) put the pages turn fast and easy.

Once the first chapter is over the story flies back in time and picks up with the aforementioned Eden refugees fleeing through a zombie infested world. They all bare the scars of their time in Eden and in between great zombie action Monchinski delves into the characters and develops each unflinchingly. We are introduced to another ill-fated convoy of survivors that eventually end up meeting the original core group of characters. Here again, Monchinski achieves balance; he introduces a LARGE cast of characters and makes them all real and believable without boring us or depriving us of any good zombie action. From this point the story maintains the split feeling and covers both groups and their hardships and survival.

The convoy slips into chaos following a mysterious nuclear explosion that kills every vehicle in the convoy with a massive EMP wave. The dead attack the living and the crowd thins from hundreds to a few in a matter of frantic blood streaked minutes. A small group escapes the carnage and Monchinski follows Eva, her blind sister Sonja, and Sonja’s three children as they flee from the undead. They run directly from the massacre of their convoy to a highway clogged with dead cars. Like the first Eden Crusade features a few evolved smart(ter) zombies known as ‘brains’. These brains use simple traps and better coordination to terrorize human survivors.

In their travels Bear, Buddy and company weave through pockets of the dead, both normal and the brains, while searching for the city Buddy speaks of. They encounter several living humans on their way, with not many being the friendly type. This is another similarity between the two Edens; the dead are not the most evil or dangerous things in the new world. The first had an evil man and his even worse body guard. Crusade has more characters in a gray area which gives their actions a far more human feel. The characters go through hell and Monchinski pulls no punches in telling their story. The climax comes before you’re done flipping pages but it is sustained and powerful enough it will stick with you long after you’ve finished reading it.

In my opinion Eden:Crusade is even better than the first in every aspect. The story has a far more epic feel and Monchinski rises to the challenge of taking the story in harrowing and violent directions. I think zombie fans will like this if they’ve read the first or not. Good apocalyptic action through and through.