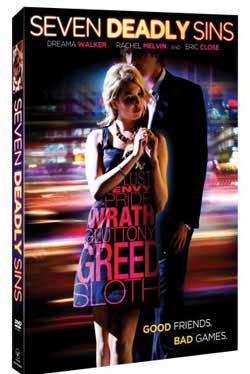 After losing her status as queen bee to Kaia (Rachel Melvin), a new transfer student, Harper (Dreama Walker) battles her catty high school frenemies in a dangerous game involving sex, deception and revenge, which leads to a mysterious death and disturbing revelations. An adaptation of Robin Wasserman’s best-selling book series, this teen-drama miniseries offers a contemporary look at the seven deadly sins.

High school is difficult enough; dealing with raging hormones and endless pop quizzes can cause even the calm to break under pressure. Romantic relationships and teenage drama are rendered in Jeff Renfroe’s “Seven Deadly Sins,” as these teens’ lives are turned completely upside down by the seven sins. The seven deadly sins, which are presented in the movie are: wrath, greed, sloth, pride, lust, envy, and gluttony. Each stage in the drama in the miniseries is an aspect of the sins, and is played out in a way that visually depicts the harm that is dealt on an individual.

“Seven Deadly Sins” is set in Grace, CA, where the narrator of the story, Kaia(Rachel Melvin), starts her first day of school. She is introduced to most popular girl in school, Harper(Dreama Walker), and they immediately become best friends/enemies as Kaia starts to get all the attention of all the guys in the school. Kaia is immediately introduced to the popular kids, including Kane(Greyston Holt), Beth(EmmaLahana), and Adam(Jared Keeso). Beth and Adam are in a serious relationship, that is hindered by Kaia’s interest in all things male plus Adam’s best friend relationship with Harper. Not only does Kaia catch the attention of the younger boys, she also catches the attention of her teachers, especially the handsome new French teacher Jake Powell(Eric Close).

When Kaia’s promiscuous ways interfere with the relationships of the seemingly square town of Grace, things go awry as drugs and alcohol get thrown into an already dangerous equation of deceit and lies. When a practical joke goes horribly wrong, killing resident mysterious hottieKaia, the friends must decide whether to hide under a lie or to tell truths to set their guilty souls free. Even though these teens are desperate for love, they learn that humans are not disposable and doing the right thing will always overcome living a life of sin.

“Seven Deadly Sins” proudly introduces the sins intermixed with the lives of a modern day high school where drama is no stranger to their everyday lives. Lots of drug use and underage drinking is very prevalent throughout the film, which can be confusing towards the viewer seeing underage teens actually picking up alcohol on their own. Being a TV miniseries, there are plenty scenes of implicated sex scenes but no actual visual representation of what happens between the teens. Also, some of the acting from characters was rigid and not very well portrayed. Some of the teens looked like they were well into their twenties vs. being a high school student they portrayed. There is not enough blood and gore to classify it as an intriguing horror, but the supernatural elements of Kaia’s reappearance into the students’ lives give the film a supernatural thriller classification.

An overall life lesson that good overcomes evil while being baited by the deadly sins of all mortals is covered in Jeff Renfroe’s “Seven Deadly Sins.” This miniseries is classified into two episodes on IMDB.com, which has plenty of suggestive scenes and drug use that totally crush the lives of a seemingly pleasant town in California.