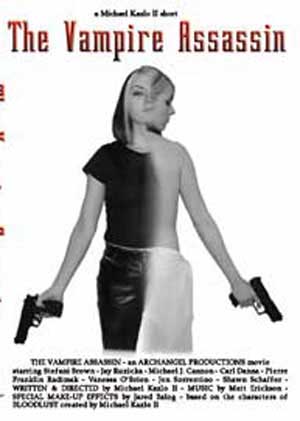 After living the life of a free spirited spoiled rich vampire, terrorizing the Eastern European countryside, Veronica is brought before her clan elders and ordered to reign in her “bloodlust” or be ostracized by the rest of the clan

Greetings once again Boils and Ghouls, to another installment of Indie Scares. Tonight we’re going to talk about a pair of films by Archangel Productions entitled The Vampire Assassin and Bloodlust.

Vampire Assassin follows Veronica, a vampire who after centuries of living the wild child life style, (think Paris Hilton or any other celebrutard as a vampire) has been brought before the council of elders and told that she has a choice. She can be cast out by her clan or she can do a little work for them as an assassin, taking out targets that the elders deem as dangerous to the cause of keeping the secret of vampirism.

She chooses the assassin job and that’s about the extent of the film.

I enjoyed Vampire Assassin, despite an unimpressive beginning. It didn’t grab my attention the way it should have but by the end I wanted more. The story itself is interesting and if it were fleshed out into a full feature with a slightly bigger budget or even better actors it would be a pretty cool film.

As it is, it’s a good short with a few flaws. Stefani Brown’s (Veronica) acting isn’t terrible but her voice-over throughout the film sounds more like a high school student reading an essay about their summer vacation than a centuries old vampire talking about her life.

The special effects are really what blew me away in this film, although they are hit or miss in some cases. The bruising make up looks fantastic and the little bit of CGI used for an explosion and for the gunfight in the video store are both impressive for a low budget. The bloodshed itself is a bit weak. It all looks too watered down and light. The arm that Veronica chews on in one scene is so obviously fake it ends up hurting the scene. However, there is a decapitation scene toward the end of the short that made me exclaim “Holy sh*t that was awesome!” in a way that no other indie film has managed to do.

Unfortunately, I can’t say the same for Bloodlust. Bloodlust follows Maria Hunter, a young woman who lost her parents to a vampire attack as a child and more recently, her brother. After her parents’ death, Maria and her brother were taken in and raised by the priests and nuns of the local church, eventually leading them to join that same church’s clergy.

However, after the murder of her brother at the hands of the same vampire, Maria leaves the seminary to fight vampires. I can sum this film up with a single word, Overambitious.

Everything I loved and hated about Vampire Assassin is here, the hit or miss make up effects, the acting that teeters between good to awful and of course a healthy helping of guns.

Nicole Signore plays Maria and is the anchor of the film. She’s decent and in some cases actually really good but as the film progresses it seems as if she’s even getting a little bored with the whole procedure. In the last twenty minutes of the film she’s replaced with a body double and the few times she does appear it’s in a really bad CGI composite. The film clocks in at about 84 minutes, but at times it feels as if it’s really dragging. There are whole scenes that didn’t need to be a part of the film and then there are those that should have been more fleshed out if only for the characters within them, like the mysterious mute vampire who sells virgin blood.

As I said before, the film is overambitious. As awesome as kung-fu battles, car crashes and multi-person epic battles can be, if you’re directing a film with mostly your friends/family/local actors, and don’t have a budget for an actual stunt coordinator, all that cool stuff I just mentioned, is probably going to look really bad. A few of the fight scenes in Bloodlust were fairly good, but some were so f*cking bad that you could tell the actors weren’t connecting with their blows. I’m all for safety and not getting your actors and crew hurt, but for Christ sake if you’re going to go for the ambitious horror action hybrid film, then just pull out all the stops.’

And the gore! What the hell? There was so little gore in this movie considering some of the deaths presented. In almost every scene with blood involved, it looked more like poorly applied Halloween makeup.

Over all, I’m a little disappointed that Bloodlust wasn’t a feature length version of Vampire Assassin, which despite its short comings was a decent over all film. Bloodlust on the other hand managed to take a similar story and drag it out to 84 sometimes tedious minutes of poorly choreographed fights as well as scenes that seemed irrelevant to the plot. There were some interesting camera angles and a few things caught my eye but Bloodlust ends up being an overambitious snooze fest that could have easily been a twenty minute short.

Well Boils and Ghouls, that’s all the time I’ve got for today’s installment of Indie Scares, I hope you all enjoyed.
Until the next time you venture into the Labyrinth, I’m Cenobite Dave, and I’ll see you all next time in Indie Scares Vol. 3