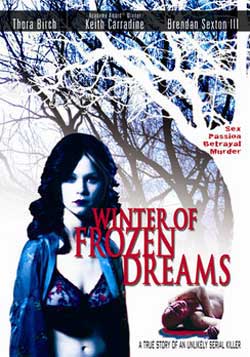 When promising biochemistry student Barbara Hoffman (Thora Birch) drops out of college, she slides into a twisted world of prostitution, blackmail and murder, dragging her fiancé Jerry (Brendan Sexton III) along for the ride, in this thriller based on a true story. But when Jerry leads a local detective (Keith Carradine) to a naked body buried in the snow, will his crisis of conscience be Barbara’s undoing?

Winter of Frozen Dreams is a 2009 horror film starring Thora Birch. It’s based on a true story about a prostitute that was accused of killing her fiance’ Harry Berge. (Dan Moran)

The film opens up with Barbara Hoffman (Thora Birch) being found guilty for the murder of Harry Berge. It then cuts back to 1977, when the murder had first taken place. The way the movie started really grabbed our attention, sadly, the rest of the movie lost us.

Barbara Hoffman’s newest fiance’, Jerry Davies, (Brendan Sexton III) goes to the cops to tell them about the body that he had helped Barbara dump into the snow but will not tell them any more information because he doesn’t want to get Barbara into trouble. Detective Lulling (played by a very talented Keith Carradine) insists that Jerry should be followed by other officers for his protection and hoping that it will lead them to enough evidence to arrest Barbara. Barbara realizes what’s going on and is very angry at the officers and won’t speak to them, (except for yelling at one of them in a bar) but never shows any type of anger towards Jerry for telling.

The rest of the movie goes back and forth to the present day in 1977 and back when she first met Harry. They show scenes of their relationship, him putting her on his life insurance, (despite being told not to) and her telling her pimp and his friends that she’s going to kill Harry just to collect his insurance policy. Very confusing, we weren’t sure when we were watching a flashback scene and when we weren’t. When we would finally figure it out, there would be another flashback scene or we would be thrown back to where we were before.

The movie was very well acted and it started getting a little bit more interesting when it hit the 1 hour mark, but the plot was dull and moved very slowly. Although the director is good, he didn’t let the audience know when he was doing a flashback. It’s not fun to be confused every other scene.

Ordinarily when you watch a movie you don’t have to ask yourself who you’re supposed to be rooting for. It reflects uncomplimentary on the film when the question does enter your mind and you can’t answer it. Such is the case for Winter of Frozen Dreams. The film looks good, but by the conclusion we were wondering why it was made as it had left little to no impact on us. Perhaps it was a case of a movie being adapted too closely to the true story it was based on, but the movie was boring (as true stories often are). The question of what goes on in the mind of a killer is raised (wonderful kindling for a psychological thriller) but the closest Winter of Frozen Dreams comes to answering it is indifference.

Yes, indifference could easily sum up this movie in a single word. Maybe that’s how people are able to kill other people, by being indifferent to their lives, not with the intriguing motives of the best mysteries or the convoluted logistics of our favorite baddies. You could even argue that Winter of Frozen Dreams succeeds in accurately portraying the mind of a killer in a non-Hollywood style. (we wouldn’t, but you could). Ultimately though, the film feels as indifferent as it’s protagonist presumably feels, and sadly this does not make for a good thriller. It might not even really work as a documentary, although a good narrator might have helped hammer out the chronology for the audience.

If you want to see a movie that’s based on a true story about a prostitute that kills men, you should rent Monster starring Charlize Theron and Christina Ricci. There’s no confusion there.