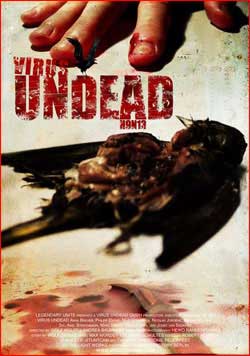 Flocks of wild birds darken the sky – some birds fall dead, while others attack innocent people …

Assistant doctor Robert is driving with two friends to his hometown – where the mansion of his grandfather stands. His grandfather is also one of the innocent victims of the birds. At a gas station he unexpectedly runs into his former love Marlene. He invites her with her best girlfriend to the untenanted mansion for a small dinner-party. The small group have a good time drinking well into the evening. Suddenly a man comes out of the dark forest and wants to kill them – apparently he is infected with a new bird-flu-virus! And he is not the only one – more and more infected persons begin to approach the house.

The friends barricade against the dangerous force, but one of them becomes infected too. The virus breaks out and above the roof of the mansion troops a new flock of birds for a new attack

Virus Undead, essentially, and you can tell by the name, is another zombie film. What I like about it though, is that it doesn’t try to hard to put a new twist on the already flooded zombie genre. We have the classic, slow moving, horribly disfigured zombies that most of us have come to know and love.

The film’s first major scene involves the death of Professor Bergen (Joost Siedhoff). A group of ravenous birds burst through the upstairs windows and attack the elderly professor. For the first half of the film we are treated to a fair amount of exposition before any action happens. We meet the main cast: Robert Hansen (Philipp Danne), who is the grandson of Professor Bergen and a gynecologist, or, as a character puts it so elegantly later in the film, a ‘Pussy Doctor.’ Patrick Schubert (Marvin Gronen) is our classic, party all the time ass hole. Eugen Friedrich (Nikolas Jurgens) is the intelligent introvert of the group who eats healthy and likes to dissect animals.

The group are on their way to Professor Bergen’s old mansion to have a night of fun before the property is sold. They stop at a gas station along the way and meet two girls. Vanessa Lux (Anna Breuer) works the cash register and wins the affection of Patrick and Eugen. The other girl is Marlene Vogt (Birthe Wolter), who’s the former love interest of Robert. The two have a dialogue that reveals the history that they share. Apparently, Robert up and dumped Marlene, bailed out of town and left her heart broken. Before leaving the store, Patrick invites the girls to hang out with them at the mansion.

Robert’s past seems to haunt him at every turn. Before reaching the mansion the guys run into Bollmann (Ski Sanger), who used to bully Robert during his childhood. The two men get into a scuffle which is immediately stopped when Officer Lehmann (Axel Strothmann) drives up and interferes with the conflict. Lehmann is obviously the comedic relief of the film, you can immediately tell when he exits his police cruiser with a dough nut in his mouth.

Personally, I believe that a zombie film needs at least three things: A likable cast of dynamic characters, a good amount of action and lots of gore. Now, that’s just me talking, I’m not saying that a film with all three of these elements is going to be an automatic hit, or a film that lacks one of these things is going to fail miserably, but Virus Undead is lacking in all three of these departments.

The cast is likable enough, but all of their personalities fall flat, since they are all basically the same person throughout the film. But I did enjoy some of the movie’s genuinely funny moments, For example, Robert is one the phone with Lehmann when a zombie attacks him, the officer’s last words were, “Don’t you touch my dough nut!”

The other issue with this film is the action, which doesn’t happen until the third act of the film. Don’t get me wrong, I love exposition and character development, but characters develop the best when they are put in intense situations. The movie didn’t seem like a zombie flick until the actual zombies start to show up. Also, there are a few action sequences near the end of the film that really don’t make much sense and lack believability.

In my opinion, the film really shines in the FX and cinematography department. The zombies, when they do manage to find our cast, look great. Virus Undead’s special effects department put a lot of work into making this movie look realistic. I have to say, however, I was disappointed with the lack of gut chomping and exploding heads. The cinematography of Heiko Rahnenfuhrer is something to be commended. The man knows how to shoot a film and give a sophisticated look.

Virus Undead is a mediocre zombie movie. I’ve seen a lot worse, but this film should be reserved for the hardcore zombie fan and may appear very lackluster to the casual horror viewer.