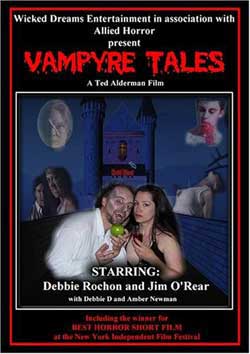 Countess Plasma and assistant Phlegm present a series of short films about vampires from their abode at Hotel Blood. The short films, which are actually stories the countess tells her assistant, all involve what look like normal people that have a secret of being a vampire.

In the abandoned Hotel Blood, Countess Plasma (Debbie Ronchon) and her hunchbacked assistant Phlegm (Jim O’Rear) present a series of short films in a collaborative feature film Vampyre Tales. The countess and Phlegm connect each film with jokes that add to the comedic value of this horror flick. The countess and Phlegm also devise silly plans, as first introduced turning toothpaste to gold though a wooden box.

The first short film is entitled The Way of the Vampire, and is about a lonely vampire who gets tormented by his overly bloodthirsty brother. When venturing out to a bookstore, the antagonized brother runs into a girl in which he instantly attracted to. He goes over to her home, and cannot control his hunger for blood and drinks turning her into a vampire too. His older brother attempts to finish the girl off by decapitation, but the younger brother retaliates and keeps the girl as his new partner.

The second film Natural Selection, follows a young attractive male who is having a conversation with himself completely in his head. He walks the streets cursing his vampirical ways of being immortal and wanting to find someone to spend eternity with. He sees a young woman out and about, and morphs into his vampire with long black fingernails and pale blue eyes. He drinks the woman’s blood, and leaves her on the sidewalk to continue on his way.

The third film Blood Feud introduces Mark and Jessica just waking up in a hotel room. Mark promises Jessica that he has a surprise for her, and takes her to Crystal Lake. They decide on a spot, and enjoy their romantic quiet time alone. All the sudden, Jessica is stabbed by what seems to be an ex-girlfriend. Mark quickly beheads the culprit, and newly transformed vampire Jessica goes on a killing spree with her vampire boyfriend.

The fourth film The Quitters is a delightful play on the traditional Alcohol Anonymous meetings. A group of people obsessed with drinking meet with psychologist Dr. Lauren, as she tries to encourage them to control their thirst. The participants of the meeting go around and contribute their stories of how long they have been sober for. After all the members of the group agree that they can’t stay sober anymore, they all reveal that they are not alcoholics but bloodthirsty vampires that go after Dr. Lauren to satisfy their thirsts.

The final short is A Moment of Darkness, which highlights a lonely doctor who is obsessed with vampire flicks. After being paged by the hospital, the patient is restless and bites the doctor. The doctor realizes that she has been transformed into a vampire, and goes to the club to prey on the men. After being disgusted by the taste of blood, she begs the women who bit her to let her have her old life back. When her transformer refuses to do so, she kills the patient who bit her and ends her life by covering herself in lighter fluid and burning her body.

When the countess and Phlegm are finished with their stories, they get a visit from the pesticide worker (Ted Alderman) to remove blobs from the dungeon. His blob removal scenes are accompanied by the credits, and the setting looks like something straight out of a haunted attraction. There are also some dressed up characters in miscellaneous costumes that attack the worker in the end.

The short films were all connected through their vampire theme, but were sometimes difficult to catch names of the characters unless paying close attention to the dialogue. Even the dialogue was sometimes rough to hear, especially during the A Moment of Darkness. Besides the biting and an occasional decapitation, there was very little violence and blood which surprised me for a vampire thriller. The countess and Phlegm are shown in a scene straight out of a hotel room, with the use of an ice bucket as a contraption to carry mail which was quite comical.

Ted Alderman and Tiffany Warren created the feature film Vampyre Tales to showcase a collection of vampire themed short films accompanied by silly jokes by the countess and Phlegm. Broadcasting straight from Hotel Blood, the countess tells her stories and promises that there will be more tales in the future. With suggestion of a sequel at hand, Vampyre Tales doesn’t introduce anything new to the classical stories of vampires, but achieves by modernizing traditional fictional accounts of the lives of creatures of the night.