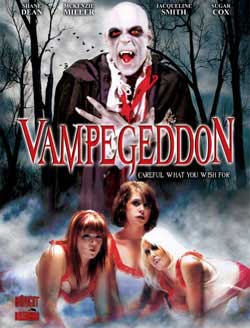 Chased out of the old world, the dark vampire lord Giovanni flees to the American southwest where he sets up a new brood. Longshank, Brittan’s premier vampire slayer follows him here, and in a final confrontation in the Arizona desert both are killed. A hundred years later Melissa, a gorgeous, goth, lesbian college student, is obsessed with becoming a vampire and escaping her terrible home life. Along with her four friends, Ted, Liz, Mona, and Kent, she regularly conducts ceremonies where she tries to commune with dark forces. When she buys an old, evil book at a creepy garage sale she finally has the key she has been searching for. Following her dreams of Giovanni and a map in the book the five friends hike out to “Massacre Lane” and finally summon up some real vampires.

Vampires are the subject of horror greats in films, and have been portrayed as beautiful creatures filled with sexuality to disgusting creatures that feed off the whatever living organism they can find. In the case of Jeffrey Alan Miller’s “Vampegeddon,” a group of goth college students waken a dead 19th century vampire by accident, causing a problem from the past to be remerged in the present. Not only do the goth students get their wish of being one with the vampires, but some of them are actually preyed on by what they want to be one with.

“Vampegeddon” begins with the tale of the release of Bram Stoker’s tale “Dracula,” which frightened all of the vampires in England that their secret would be out. Due to the popularity of the Stoker’s novel, the vampires from England fled to the United States, where the famed slayer Longshank(Patrick Valliancourt), followed them. His number one targeted vampire Giovanni(Shane Dean) has the facial features of Nosferatu, and wears an old style suit with a red scarf tied around his neck. When Giovanni and Longshank unite, Giovanni prevails as Longshank is killed in his desperate attempt to be rid of the vampire. The film jumps to present time, where a group of goth students discuss their plans for a ritual that evening to wake the vampires that they suspect exist.

The group consists of two dark haired males, Kent(Jimmy Flowers) and Ted(Josh Bingenheimer), and two excessively dressed goth chicks, Melissa(Katherine Von Forelle) and Mona(Sugar). Their other group member Liz(Jacqueline Smith) is not as excessive at the other two girls, and works at the Chicken Shack to make some cash. She is also the only girl in the group that is not attracted to girls. The group does the ritual, and is saddened when nothing happens. Melissa confides in her life as being truly horrible, and washes her pain away with vodka.

The next morning, Melissa leaves her home in which her abusive father tortures her mother, and comes upon a garage sale. Mr. Rizzowski(David C. Hayes) encourages her to come look at his items in which he is selling, and he draws her attention to a book named “Kindred and Blood.” He gives the book to Melissa, and she excitedly brings it to her fellow vampire lovers. When they do the ritual as written in the book, things change as Melissa and Mona have a romantic make out session that leads to a sexy vampire fantasy that Liz immediately escapes from. Liz runs away, and finds a piece of mirror that has the spirit of Longshack possessed by it. His spirit jumps from the mirror, and into Liz’s body giving Liz a new slayeristic attitude and British accent.

When Giovanni arises once more from the ritual, the group headed by Liz must desperately attempt to end the ritual that would make Melissa Giovanni’s bride. With help from the spirit of Longshank, Liz is able to successfully ward off the brood of deadly vampires, and save her friend Melissa from being forever under Giovanni’s spell. Melissa and Liz ride off hand in hand together, the only survivors of Giovanni’s massacre.

“Vampegeddon” adds to the long list of vampire tales that are out there, but does not add anything that is new to the vampire spectrum. The vampires feasted on human blood that was drained from human necks, and were killed by a stake through the heart. Also, the goth group in the movie was stereotyped in dress and actions, and just because they were goth they had a lust for vampirical life.

There is a great deal of blood and lesbian make out scenes that try to keep the viewer enticed with the movie, which Melissa and Mona characters are voluptuous lesbians hot for each other. Something that struck me as odd was Melissa having fantasies about being seduced by Giovanni, but her sexual orientation does not match with wanting to be seduced by a male vampire.

Jeffrey Alan Miller’s “Vampegeddon” is a new-age vampire tale, which is fueled by the fire of a misunderstood college student trying to not be stuck in a city that looks down on her practices. When her group of fellow goth students are preyed on by a historical vampire, their only hope is to give up their silly fantasy and fend for their own lives.