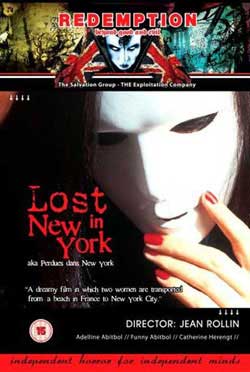 Directed by French cult hero Jean Rollin, Perdues Dans New York/Lost In New York concerns two women who find themselves mysteriously transported from a seaside in France to the streets of New York City. Separated and lost, they must find each other and figure out how to get back home.

Lost in New York is not a sex or horror film, per se, it’s more of a surrealist poem. It tells the story of two young girls, Michele and Marie, that discover a small wooden idol that possesses magical powers and enables them to travel through time and space. In this very personal film for Rollin, reality, and the world of cinema and literature become one, as the girls delve deep into the stories they only once dreamed of. In New York, that beautiful, yet mysteriously seductive, dangerous place, they finally meet each other again after a dream like journey of self discovery.

The film is structured around New York and opens with an elderly woman, Michele, huddled in a black shroud in the middle of a deserted street, surrounded by decrepit, decayed buildings. The elderly Michele feels the rough surface of a wooden charm and begins relating her tale of encountering a mysterious young girl as a child, the two of them escaping into the dream world of New York by way of a magical moon goddess statue and their love of each other..

Her eyes, her narration tells us, are no longer good – she must use her hands to see the charm. It reminds her of her childhood, and as she continues to narrate her recollections as the film flashes back to when she was a young girl.

The young Michele enters a field to find a young girl, Marie, sobbing. Marie is crying because she has no one to play with. Michele offers to play with her. The delighted Marie promptly shows Michele the wooden charm – or “moon goddess”, as she calls it – and invites Michele to come and play with it.

They rush back to Marie’s bedroom, where she explains that the moon goddess has magical powers that will allow them to travel through time and space. Clutching the charm tightly, the girls are transported through Marie’s storybook – represented here via colorful illustrations as Michele’s narration continues.

The girls then dream of what being grown up will be like. Will they get to go to New York? The girls then use the charm to travel forward in time to their adulthood, and to take them to their dream city.

But New York is a big scary place, and the girls become separated. One barely survives a mugging by slashing her female aggressor’s throat, while the other shares the dream-within-a-dream with her friend. Oh, and vampires do arrive while the pair are in New York .

In-between these travels, we go back occasionally to the mourning Michele, who says she cannot live without Marie in her life. But where is Marie? What fate befell her?

If it all sounds a tad confusing, it isn’t. Not really. Lost in New York is difficult to synopsis due its non-linear plot structure, flitting backwards and forwards through different periods of the girls’ lives, and it’s deeply personal style of director Jean Rollin.

The film is sentimental, in a way that is both entertaining and honest. In a remarkable sequence, as the camera lingers over a vast array of images from the covers of old fantastique serial novels, the two girls throw themselves into both the images on screen, and, as the narrator tells us, into a veritable history of cinema itself.

The film is built upon series of comparisons and contrasts; the cinematic world with the real world, timelessness and memory with a specific sense of time and longing, the young girls adventures and the two old women who reunite on the beach. It’s a film that bears Jean Rollin’s unmistakable mark, and it becomes clear, as he reveals himself through revisiting the themes that have come up again and again throughout his filmography.

Lost in New York is an interesting addition to Rollin’s profile. It’s only 51 minutes long and doesn’t deliver the gothic lesbianism or gore of his more well-known movies, but moves at a languid pace to allow us time to take in the dreamlike concept and beautiful arthouse visuals.

You get the feeling there should be some profound sense of revelation at the end, and yet – while the finale is oddly haunting – there’s nothing there.