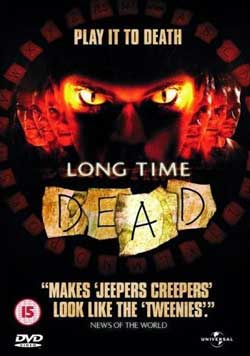 A group of college students play with an Ouija board in an attempt to connect to the spiritual realm. Unfortunately, the drunken participants actually succeed in contacting a spirit that spells out the words “all die” on the board. Spooked, the students immediately close up the board, bringing the demonic spirit into their world. Soon enough, members of the party begin dying, leaving the rest to figure out how to vanquish the angry spirit.

Long Time Dead in an English import that tackles the stale subjects of the occult, Ouija boards and demon worship. The film opens with a room that’s echoing with mournful chanting. We see a group of people sitting at table, using an interesting looking Ouija board, and some other occult items in attempt to summon a spirit of some sort. After the title sequence, we fast forward to present day times, where we meet three young English men, Rob (Joe Absolom), Liam (Alec Newman), and Spencer (James Hillier). The trio are lounged on the living room sofa, sharing a joint, just as the opening narration states, “We were three guys, getting f*cked up. Getting really f*cked up, indeed.”

One of them, grabs the joint and puts it out in the ashtray on the coffee table in front of them and expresses his desire to go out. Annie (Melanie Gutterridge) then walks in, and they all agree to meet at the club. While at the club, the group discusses they best ways to get a buzz. Their new roommate, Joe (Mel Raido) mentions railroad lines, where you set up a line of cocaine on a railroad track and snort it while trying to beat the oncoming train. Liam claims that he got his best buzz from using an Ouija board, afterward they all agree to try it out. The group ventures into an abandoned part of the club, which looks like an empty warehouse and set up a makeshift Ouija board, made from little square pieces of paper with letters and answers written on them and they use a glass for the centerpiece. After each one of them rest one finger on the glass, Lucy (Marsha Thomason) begins the séance, urging any nearby spirits to join them. No one seems to take her seriously, that is until the glass starts to move franticly across the table. The spirit calls itself, ‘Dijnn.’ Liam loses it and chucks the glass on the floor, shattering it.

This movie comes off as generic. As I’ve already stated before, the subjects of angry spirits, Ouija boards and demon worship are already pretty stale and are very hard to be used in an original fashion, and Long Time Dead fails to do that. That doesn’t necessarily make a bad movie, just a very mediocre one. While the subject matter doesn’t exactly excel, the acting does. I enjoyed watching the cast interact with each other and the dialogue was brimming with cleaver and quirky English humor, the same type of humor you would find in any of the sitcoms that air on BBC America. I especially appreciated Liam’s transformation from fun loving Englishman into a tortured character, haunted by his dark past, which is revealed by some creepy newspaper articles.

The script was fairly solid, with a few twists that’ll keep you interested throughout the film as you watch the cast being picked off one by one by the Dijnn demon. The kills in this film are not anything bloody or over the top, which I think works in this film’s favor. In my opinion, splatter and gore should be saved for slasher films, zombie films and the like. Subtle effects work best the occult horror genre, creating a more quiet, atmospheric feel to them.

Overall, this film has a lot going for it. Decent acting, good effects, and well written script with some good, realistic dialogue, but it falls short in comparison to other, more original films that are out on the market today. Long Time Dead doesn’t really bring nothing new to the table, so fans looking for something more than just the ‘oops, we summoned a malevolent demon by screwing around with a Ouija board’ scenario, should steer away from the movie. However, if you are looking to be entertained for an hour and a half with some likable characters, good scares and nice twists, then by all means rent Long Time Dead, grab a bowl of your favorite popcorn, turn out the lights and enjoy.